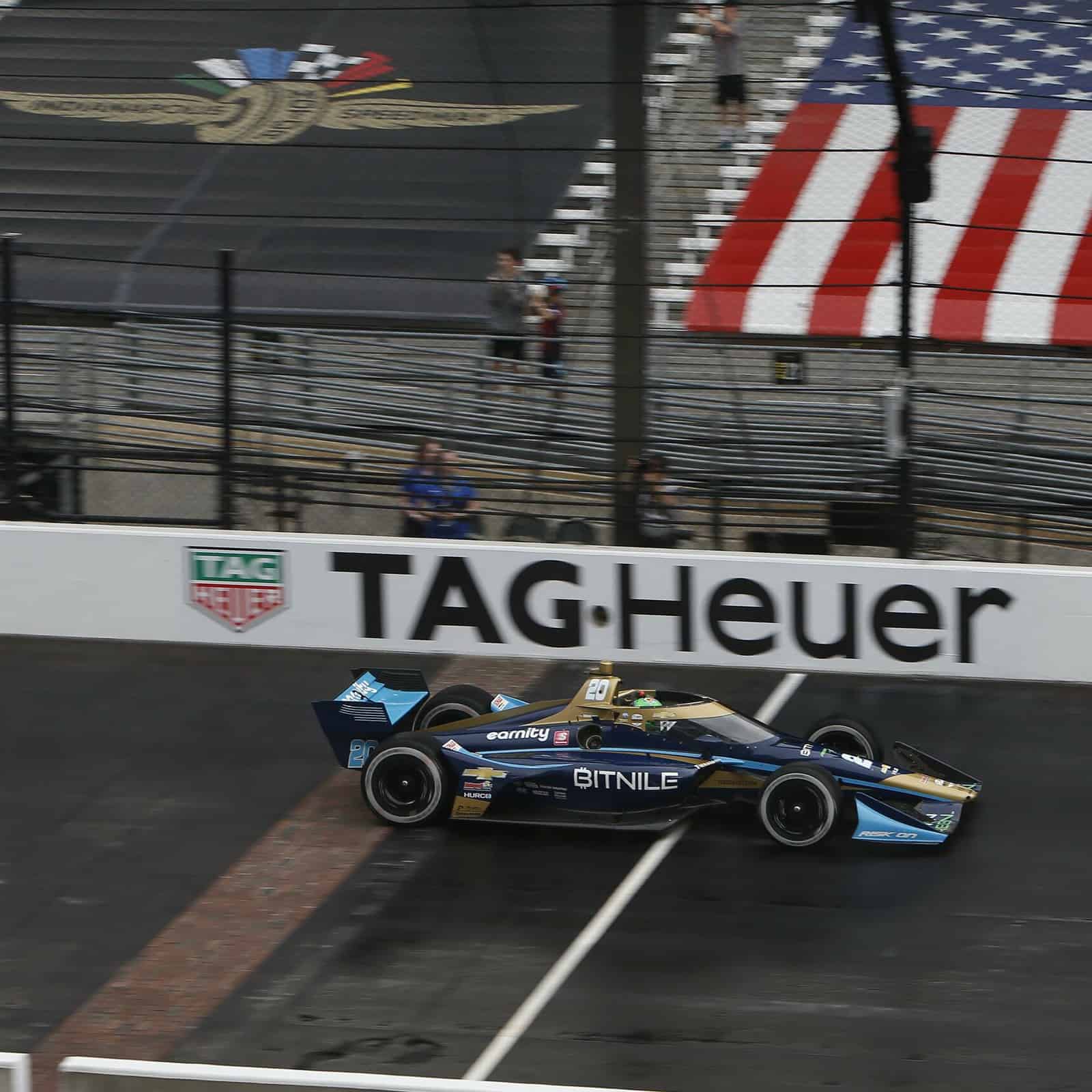 After starting fourth, the Noblesville, Indiana native fell to fifth at the start of the race and remained there after every driver in the 27-car field pitted to replace their wet tires with slicks on the semi-dry track.

Daly was still fifth until Josef Newgarden got around his fellow Team USA Scholarship winner going into turn 1 on lap 12.

Going into turn 7, Takuma Sato passed Daly for sixth place and after the corner, Alexander Rossi got by into seventh place.

Scott McLaughlin, Jack Harvey and Rinus VeeKay went around Daly after turns 10-11. Shortly thereafter, Romain Grosjean and Callum Ilott each gained a position in turn 12 while Simon Pagenaud made a pass of his own in turn 13 going around the outside of the No. 20 Ed Carpenter Racing Chevrolet.

Daly started lap 13 in 14th place and went as low as 18th place on lap 15. Exasperation seemed to set in for Daly behind the wheel as the pit stand asked him to get back into a rhythm.

“Everything in the data looks fine.

I understand, there’s no way it changes that much. It’s not your fault.”

Pitting on lap 28 seemed to cure the car’s woes as a new set of red sidewall tires made the car handle better.

“I don’t know what happened on the first set of reds,” Daly said post-race. “But they were used reds, and we just went straight backwards. Car was an absolute handful, and I have no idea why. Then it kind of forced our hand and we put on new reds, and it was right back to the great car that it was.

“Firestone obviously makes a great tire, and sometimes when you put on the used reds, I don’t know if you pick up something on it. It’s something. I’ve had that happen before in other races kind of randomly, but it might just be kind of like the luck of the draw. You might have run over something that — it felt like we had a left rear that was going flat, but it wasn’t. Very strange feeling. Literally, as soon as you put on another set of tires, everything was perfect. There’s only one variable there that we changed, and that’s tires.”

The climb back through the field was the next challenge Daly faced. After gaining a few spots because of other drivers’ on-track mistakes and strategy gambles that didn’t pan out, the fringe edge of the top 10 became Daly’s home — around 10th-11th place.

After the caution came out for Jimmie Johnson’s stalled car, about half the field pitted on lap 59. As light rain was falling on the main straight, the timing stand gambled that rain would not intensify and dry weather, slick tires were the way to go. Two laps later, Daly and eight other drivers realized their mistake and pitted for wet weather tires.

Daly gained two positions on pit road under that caution and gained even more after Callum Ilott pitted and Jack Harvey served an end of the line penalty for contact on pit road, putting Daly in seventh for the restart.

With three more cars in front of Daly on slick tires instead of the faster wet weather tires, those three positions were easily gained. However, Marcus Ericsson made a late pass and dropped Daly to fifth as the race ended under caution.

The early drop through the field gave Daly cause for concern. In the previous IndyCar race of the season at Barber Motorsports Park, Daly’s teammate Rinus VeeKay qualified on pole and wound up third while Daly finished 19th after starting 22nd.

This time, while there was a worry about finishing position, there were a lot of laps left to make up those spots.

“I thought it was just another day in the office, but I never give up in this series, and I tell the team that,” Daly said. “I said it doesn’t matter if the day is going bad, but I will always be fighting until the end. Same in Barber. Same in any track. This is what I love to do. I want to be competitive. I want to beat these guys and girls that we’re racing against, and we obviously beat the majority of them today.

“It was something that worked out in the end, and we’ve seen crazy stuff like this before. I remember Sebastian Bourdais starting last and winning races, and people going all over the place spinning, being a lap down and winning races. That’s the fun of INDYCAR.”

Next up is practice for the 106th running of the Indianapolis 500 starting on Tuesday, May 16. Qualifying is the following weekend and race day for the 500 is Sunday, May 29.