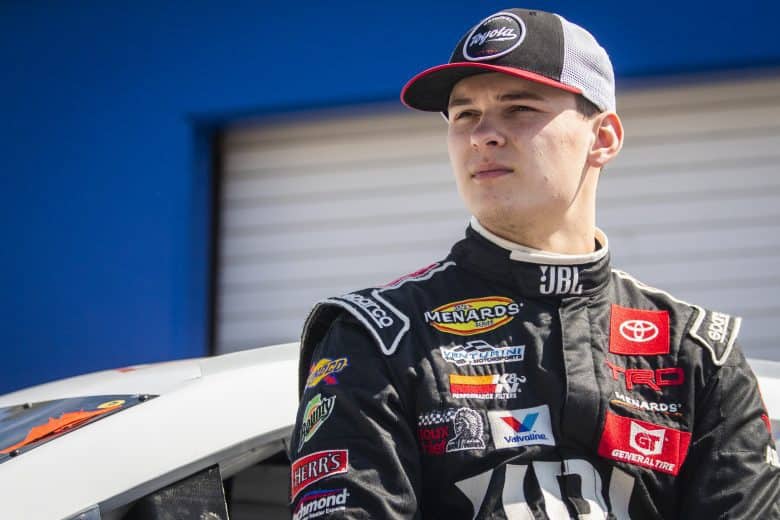 Corey Heim won the pole for the ARCA Menards Series race at Kansas Speedway. He will lead the 19 drivers to the green flag for the Dutch Boy 150.

Driving the No. 20 Venturini Motorsports Toyota, Heim posted the fastest time in the combined practice and qualifying session of 175.730 mph.

Heim won the 2020 ARCA season finale at Kansas. He will also drive double duty on Saturday (May 14) at Kansas as he will also pilot the No. 51 Kyle Busch Motorsports Toyota in the NASCAR Camping World Truck Series race.

Wheeling the No. 18 Kyle Busch Motorsports Toyota, Drew Dollar will start second after missing the pole by 0.008 seconds.

Nick Sanchez, who has won the most recent ARCA race this season as well as the series’ most recent race at Kansas, will start third.

Connor Mosack and Gus Dean round out the starting top five in fourth and fifth place, respectively.

Daniel Dye, who was reinstated after a suspension, will start sixth.

Will Kimmel, Rajah Caruth, Ron Vandermeir Jr. and Greg Van Alst complete the rest of the top 10 in seventh through 10th, respectively.

Twenty drivers were on the preliminary entry list, though that number has changed. No drivers failed to qualify for this race, the fourth of the ARCA season.

Matt Wilson, who was slated to drive the No. 7, withdrew.

In addition, Arnout Kok crashed his No. 01 during the on-track session.

The 01 car just got unhatched from the tow truck and crashed into a Niece Motorsports hauler. No significant damage that I can tell. #nascar #kansas pic.twitter.com/pzP95PZxZO

It is uncertain whether Kok will compete in the Dutch Boy 150.