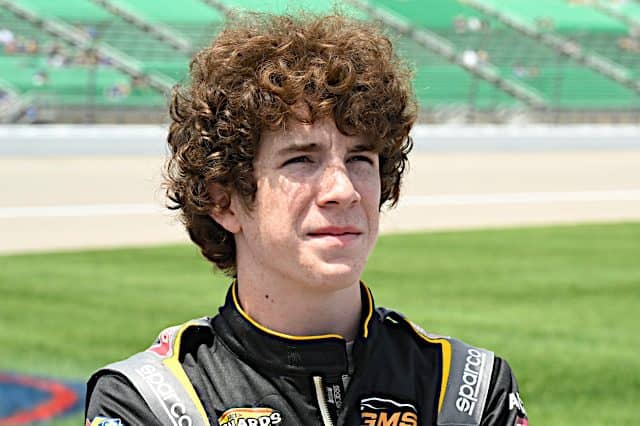 A third-place ARCA Menards Series finish at Kansas Speedway on Saturday (May 14) doesn’t even begin to touch the surface of Daniel Dye’s time since ARCA ran its previous race at Talladega Superspeedway.

At Talladega, Dye led the field onto the backstretch on lap 68. Yet his spin brought out the race-ending caution, and Dye finished 17th, not indicative of where he ran in that race.

Then three days later on April 26, Dye was arrested due to his involvement in an incident at his high school. He was subsequently suspended from ARCA competition, seemingly dashing his championship hopes.

On May 13, the charges against Dye from the high school incident were reduced, and Dye was immediately reinstated by ARCA officials.

Despite his off-the-track saga, Dye did not miss any ARCA races. His championship hopes are still intact after he drove an up-and-down Dutch Boy 150 to a third-place finish, his third top five finish this season.

Rallied back to P3 after a mistake on pit road. Great work by DD to keep charging all afternoon here in the Kansas heat. [PR] pic.twitter.com/Iyd97A6Odg

Back behind the wheel of the No. 43 GMS Racing, Dye qualified sixth for the Dutch Boy 150.

Early in the race, as Dye raced inside the top 10, his car got loose, nearly making contact with the outside wall. Dye magnificently saved his car from hitting the wall as well as straightened it out. Dye’s save definitely was a move of the race candidate.

When the competition caution flag flew at lap 50, Dye was in fifth place. At that time, nobody had the speed of catching race leader Corey Heim. Dye brought his car onto pit road. Yet disaster struck his GMS team.

Due to miscommunication, his GMS pit crew took too long to pit the car. As an unfortunate result, Dye lost a lap. Adding insult to injury, ARCA officials initially ruled his pit crew serviced the car with fuel and tires simultaneously, breaking one of the modified pit stop rules.

ARCA officials then rescinded one of the penalties, allowing Dye to remain only one lap down.

When the top two running drivers, Heim and Drew Dollar, collided, Dye received the lucky dog, putting him back on the lead lap.

The Rev Racing duo of Nick Sanchez and Rajah Caruth drove away from Dye, but when the checkered flag flew, Dye brought the No. 43 Chevrolet to a third-place finish.

🏁 CHECKERED FLAG 🏁@danieldye43 brings the No. 43 @SolarFit Chevy home with a third place finish at @kansasspeedway!

After parking his car on pit road, the FOX Sports 1 broadcasters noted Dye appeared both emotionally and physically drained. The 100-lap race was an up-and-down day for Dye, but a good finish after a tumultuous time following the Talladega race.

Next up for Dye and the ARCA field is a trip to Charlotte Motor Speedway. Dye has never competed there before, but it’s another 1.5-mile track, the same size as Kansas. That race will take place on Friday, May 27 at 6 p.m. ET with TV coverage provided by FOX Sports 1.

So an entitled bully got 3rd after he assaulted somebody at school. Shows what daddys money can do! Great story!

Your story stated he was emotionally and physically drained. How is the boy he assaulted doing? It’s obvious you are biased and a fan of Dyer.