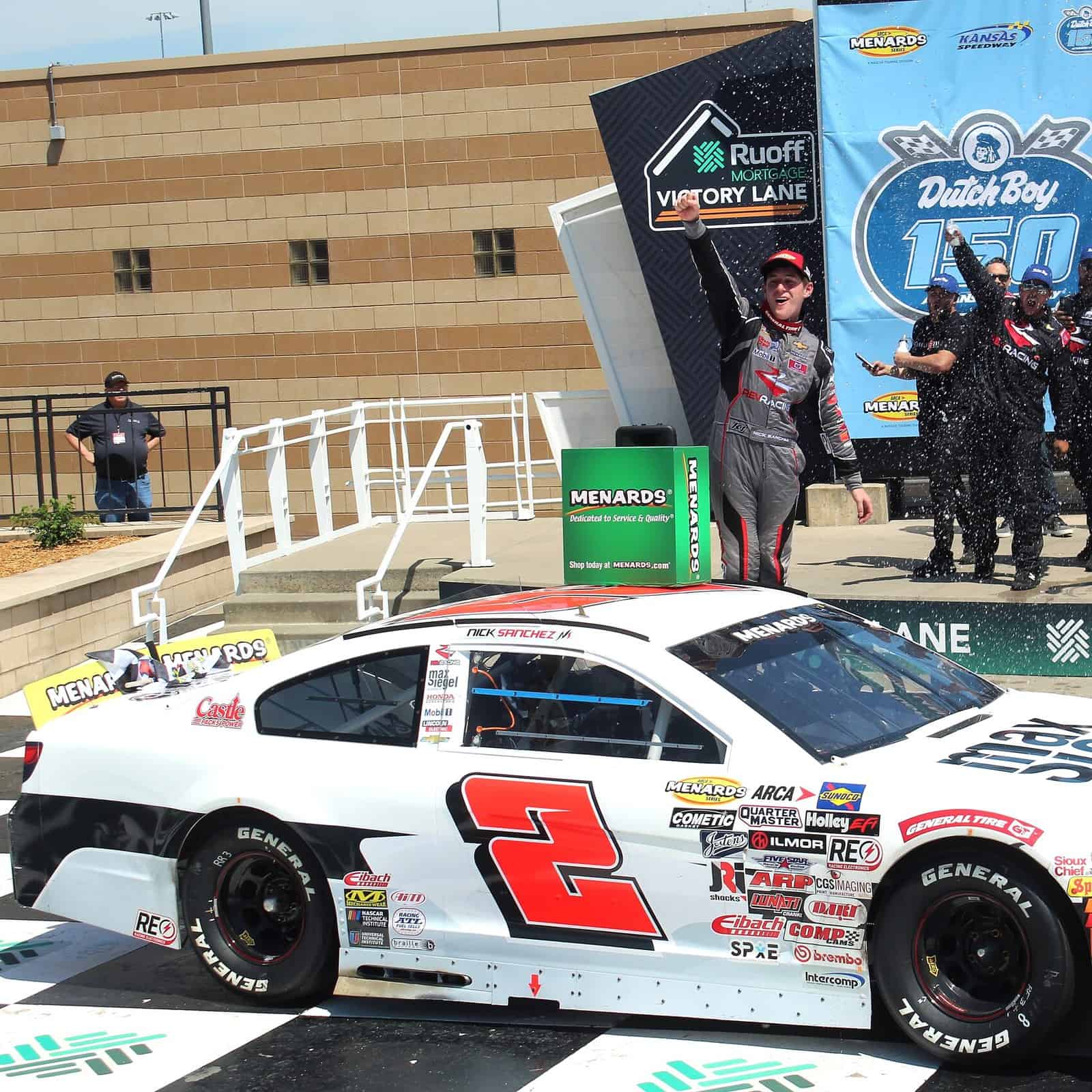 Early on it appeared that Heim would dominate the race. Heim led the opening 58 laps in his No. 20 Toyota until a battle with Drew Dollar caused both of the dominant cars to wreck. Dollar and Heim raced hard into the corner and Dollar got loose underneath, ending Heim’s day. Dollar’s team attempted to repair some damage and finish, but soon after he found himself in the wall and retired from the race.

That allowed the race-long battle between Rev Racing teammates Nick Sanchez and Rajah Caruth to race for the win, with Sanchez breaking away and leaving Caruth in the midwestern dust. Caruth was the points leader coming into Kansas this week but now is unofficially sharing that lead with Sanchez in a tie.

“Honestly right there we were just trying to maintain once we got that caution,” Sanchez told FOX Sports 1 after his win. “We lucked out with what happened with the Nos. 18 and 20. I feel we could’ve possibly beaten them there at the end on speed. Inevitably we won so I’m happy.”

“I feel like you can move up a lot here [at Kansas Speedway],” Sanchez continued. “I was utilizing the third groove to stall someone out. You can’t do that at other tracks. I love Kansas.

“Our Max Siegel-owned Chevy was fast today,” Caruth told FS1 after earning his career-best ARCA finish. “I cannot thank everyone enough on this Rev Racing team. They worked really hard for this weekend bringing two fast race cars. It sucks to finish second. Can’t do much when we’re all wide-open on the top there. I felt like I was the best car on the long run but once we all went to the top, it was really hard to pass. Nothing I could do. I didn’t hit the wall, though I got close to it. Just steps I wanted to look at so overall, a pretty decent day.”

After being reinstated by ARCA after his felony charge was reduced to a misdemeanor, Daniel Dye finished third in his No. 43 GMS Chevrolet. Dye was held a lap after the competition yellow due to penalties and recovered for a top three finish, thanks to some unfortunate luck of others.

Gus Dean and Connor Mosack rounded out the top five.

The moment that everyone will remember going into the second Kansas race later this season will be the wreck between friends Heim and Dollar.

Billy Venturini, who was working as Heim’s crew chief, held nothing back on how he felt about Dollar and the incident saying, “I know how David Gilliland feels. Drew wrecks all your shit when he’s racing for you and he wrecks it all when he’s racing against you. I can understand why he punched him in the eye at Bristol last year. Just a typical bonehead move by Drew. He killed a couple of my cars here and now he killed one here today. Pure lack of talent. Great kid; does not need to be a race car driver. He’s got other things he could be doing to make a good living.”

Heim showed constraint with his comments saying, “I gave him plenty of room I thought in [turns] 1 and 2. We were side drafting each other pretty hard. I raced Drew with a lot of respect and we were both running high. It just looks like he lost it and just part of it. I don’t think he did it on purpose. He’s just trying to go for the win. It is what it is.”

After retiring from the race later, Dollar told FOX Sports 1 his side of the story:  “Just racing there. Made a mistake that took us out of it. I know what happened. It’s tough when you’re racing underneath someone and you get loose. Hate that I did that to Corey and hate that I took away his chance of winning. I have a lot of respect for Corey. I talked to him and I apologized for what I did.”

History was also made as Tiffany Myrack became the first woman to be the race director in the ARCA series.

ARCA will race next at Charlotte Motor Speedway on May 27 on FS1.