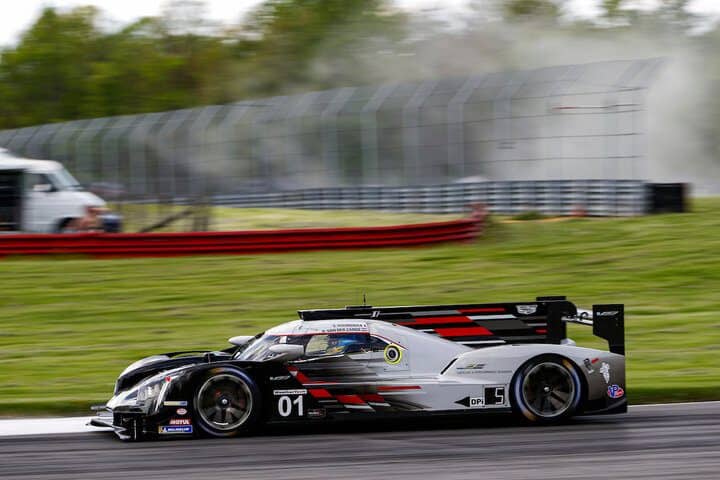 Unlike WeatherTech Raceway Laguna Seca, things are a little more equal between the Cadillacs and Acura in Mid-Ohio.  Chip Ganassi Racing’s Sebastien Bourdais was quickest overall in IMSA WeatherTech SportsCar Championship practice with a lap at 115.291 mph.

Friday (May 13) saw Wayne Taylor Racing pick right up from where they left off in California.  After leading almost every on-track session at WeatherTech Raceway Laguna Seca, Filipe Albuquerque was fastest overall in practice Friday with a lap at 113.170 mph.

Albuquerque’s lap was seven-hundredths of a second faster than Meyer Shank Racing with Curb-Agajanian’s Tom Blomqvist.  Chip Ganassi Racing’s Earl Bamber was the fastest of the Cadillacs in third, then Pipo Derani and Bourdais.

In LMP2, Era Motorsport’s Ryan Dalziel ended up on top with a lap at 110.629 mph, good for seventh overall.  Dalziel’s lap was four-tenths of a second faster than PR1 Mathiasen Motorsports’ Jonathan Bomarito.  Tower Motorsport’s Will Stevens, driving in place of Louis Deletraz, was third fastest, followed by Anders Fjordbach and Josh Pierson.

In LMP3, trouble struck early for Andretti Autosport.  Jarett Andretti was forced to stop the No. 36 Ligier JS P320-Nissan with engine issues in the first 10 minutes.  This resulted in a red flag.  The Andretti No. 36 ended up being the only team to not set a time in the opening session.

Sean Creech Motorsports teammates Barbosa and Dr. Lance Willsey entered Mid-Ohio with the LMP3 points lead after winning at Sebring.  However, this weekend is not starting so well.  After Barbosa timed in fourth quickest, Willsey collided with Inception Racing’s Brendan Iribe in the closing minutes of the session in turn 11 and crashed.  This brought out a red flag that ended the session.

In GTD, Turner Motorsport’s Robby Foley topped the chart with a lap at 100.084 mph, good for 20th overall.  Foley’s lap was two-tenths of a second faster than Vasser Sullivan’s Jack Hawksworth, who is making a guest appearance in the GTD class due to Lexus sponsoring the race and the GTD Pro class not racing this weekend.  Paul Miller Racing’s Bryan Sellers was third fastest, then Aaron Telitz in the second Vasser Sullivan Lexus.  Wright Motorsports’ Jan Heylen rounded out the top five in the 1st Phorm Porsche.

In the second practice session Saturday morning (May 14), the Acuras were at the front for the vast majority of the session thanks to a quick early lap from Blomqvist.  However, the best times came during the DPi-only final 15 minutes of the session.  Bourdais took over the top spot overall with two minutes remaining in the session.  On his final lap at speed, he set the best lap of the weekend to this point.

In LMP2, Fjordbach was quickest in his ORECA 07-Gibson with a lap at 111.331 mph, good for seventh overall.  Fjordbach’s lap was five-hundredths of a second faster than Stevens.  Dalziel was third, then Bomarito and Pierson.

LMP3 was once again topped by Braun, this time with a lap at 106.079 mph.  Braun was a quarter of a second faster than Grist.  Fraga was third, while Gabby Chaves was fourth in the Andretti Autosport No. 36, fixed after Friday’s engine issues.  Performance Tech Motorsports’ Rasmus Lindh was fifth.

In GTD, Paul Miller Racing’s Madison Snow was fastest with a lap at 101.280 mph, good for 21st overall.  Snow’s lap was one-sixth of a second faster than Turner Motorsport’s Bill Auberlen.  Hawksworth was third, then teammate Frankie Montecalvo.  The Heart of Racing’s Roman DeAngelis was fifth in his Aston Martin.

Inception Racing’s weekend to this point has not been the greatest and Saturday was no exception.  65 minutes into the session, Jordan Pepper spun the team’s McLaren 720s GT3 and got stuck in the gravel outside of turn 1, which brought out the session’s first red flag.  After being extricated from the gravel, he was able to continue and eventually set the 10th best time in class.

Right at the end of the regular portion of the session, Rick Ware Racing’s Ryan Eversley pulled his Acura off-course at turn 4.  This drew the session’s second red flag.

Qualifying for the Lexus Grand Prix at Mid-Ohio is scheduled to start at 1:10 p.m. ET Saturday afternoon.  The session will be streamed live for free at IMSA.com and at Peacock (subscription required).