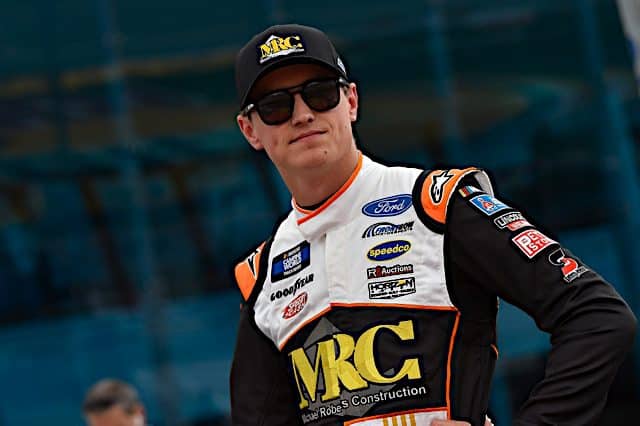 He led 108 of the 134 laps en route to his series-high third victory of the season.

“Really just an unbelievable truck,” Smith told FOX Sports. “We honestly struggled there in the first stage. I feel like I made the mistake last week with adjusting too much in the heat of the day and it wasn’t right at night. We just executed greatly with this truck. This is our (Las Vegas Motor Speedway) truck, I feel like this would’ve been an image of Vegas, what we’ve seen tonight if I didn’t get damage early in the race there. …

“That was one of my easier ones I’ve ever had to win. That late-race restart scared me a little bit, good thing I didn’t have another one there because I’m stuck in fourth (gear), so sorry for the no burnout.”

ThorSport Racing’s Ty Majeski finished second, while GMS Racing’s Grant Enfinger was third. Chandler Smith rebounded from an early pit stop that put him a lap down to finish fourth, and Christian Eckes rounded out the top five.

The race was rather uneventful the first couple of stages, save for a Blaine Perkins spin off the nose of Tate Fogleman. Corey Heim and Zane Smith won stages one and two, respectively.

On the stage three restart, Smith regained the lead and was far ahead of the field until the caution came out for Kris Wright. The leaders pitted, and Heim grabbed the lead off of pit road. Hocevar’s crew had an uncontrolled tire, so he had to restart at the rear.

But Heim had some problems as well, as he reported that his engine was shutting off during the race. FOX Sports 1 reported that it was getting worse after the next restart.

Later, while the No. 51 was running in the sixth place, Heim’s day went further south when he skidded against the wall and had to pit with about 28 laps left. He ended up finishing in 33rd.

Back at the front, the No. 38 Front Row Motorsports truck appeared to have the race won until about 13 laps to go. Niece Motorsports’ Dean Thompson got loose off of turn 2 and spun on the backstretch, leading to another late-race restart.

No one had anything on Zane Smith, though, who took off with eight laps left and claimed the checkered flag.

Trucks are back in action next Friday, May 20 at Texas Motor Speedway. Television coverage starts at 8:30 p.m. ET on FOX Sports 1.