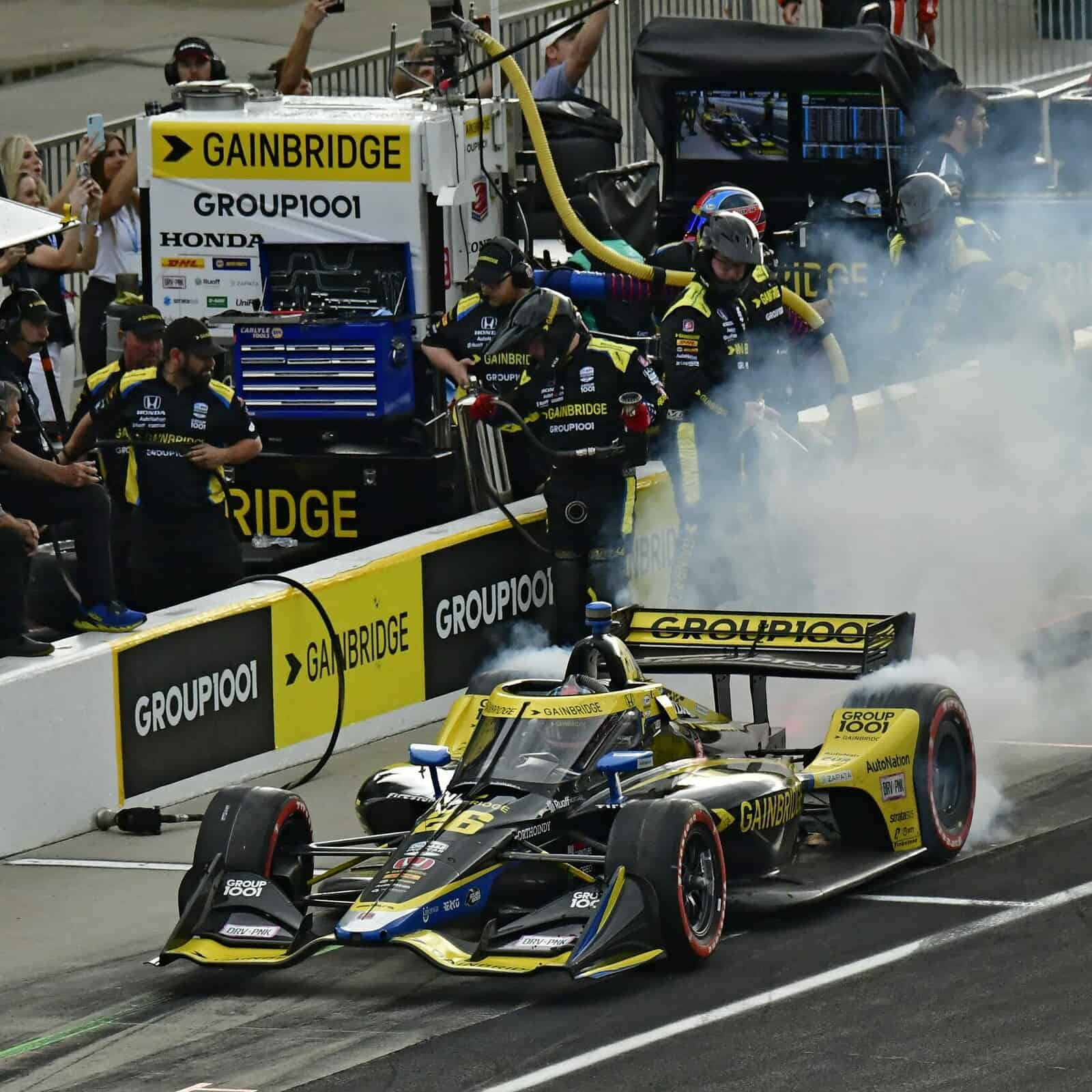 Colton Herta’s save on a still partially damp road course at Indianapolis Motor Speedway seemed to defy the laws of physics in Saturday’s (May 14) GMR Grand Prix, the fifth race for the 2022 NTT IndyCar Series season.

Going through turn 8 on the fourth lap of the race, Herta was right behind Pato O’Ward who had just pitted from the race lead for dry weather tires as the track was drying from an early afternoon rain shower. However, Herta made his pit stop for slick tires one lap sooner and had generated enough heat in his tires to become the fastest car on the track.

The No. 26 Andretti Autosport Honda pushed hard to pass O’Ward for what would effectively become the lead of the race. Going through turn 8, Herta had a slide that looked like it came straight out of The Fast and Furious: Tokyo Drift.

WHAT A SAVE by @ColtonHerta! #INDYCAR

The pass was for 13th spot at that moment, but once everyone else made their stops on that lap, Herta would be up front. He eventually led 50 of the race’s 75 laps en route to a victory.

Herta started the race in 14th place and was nearly 9.5 seconds behind early leader O’Ward before pitting. By the fifth lap? He was leading.

Let’s take a closer look at how that happened.

INDYCAR has 12 different scoring loops around the 14-turn, 2.439-mile road course. The distance between loops varies around the circuit, the shortest being .108 miles and the longest .3412 miles.

Herta’s micro sector data from before and after the pit stop for slick tires is the focus here. Herta’s pit stop at the end of the race’s second lap means there are five micro sectors with no data from the pit entry lane to the blend line at turn 1, so the overlapping sectors will get the attention.

In the shortest micro sector made up of turn 3 and half of the straight bits of track before and after that corner, Herta was already .2172 seconds faster immediately after exiting the pits on slick tires than he was on wet weather tires that were on their second lap of running with some pressure and temperature built up.

The gaps would only grow larger for most of the rest of the lap. In the next interval, starting between turns 3-4 and ending just after turn 6, Herta was .8899 seconds faster than on his in-lap. The next interval comprising most of the backstretch was quicker by .313 seconds.

Because the turn 10-11 complex was quite a bit damper than the rest of the track, Herta was .278 seconds slower through that complex after pitting. However, gaining .3144 seconds from turn 11 to just before turn 12 more than made up for that deficiency.

In just over one lap on slick tires, Herta was 3.9395 seconds faster than his lap 2 times on wet weather tires. The times were only getting faster and faster, with most of the micro sectors on lap 4 being around three quarters of a second faster on the slick tires than the wet weather tires on lap 2.

Colton Herta's outlap and the lap after where he overtook Pato to pretty much win the race.

Even when Herta had the slide on lap 4, his elapsed time through that portion of track was actually .0331 seconds faster than the in-lap on wet tires. After that slide is when Herta took the lead exiting turn 10.

Looking at the head-to-head data on lap 3, there are seven micro sectors of data for both drivers at the same time while Herta was on slicks and O’Ward was on wet tires. Herta’s overall time across those micro sectors was .7073 seconds faster than O’Ward’s, even though O’Ward had faster times through three of those micro sectors.

The decision to pit early for slicks was an inspired choice that worked. Herta learned from his peers what to expect and figured out when to pit.

“I had an understeer that was building,” Herta said in the post-race press conference. “I knew from hearing from previous drivers at how much the reds will run in the wet. I felt that feeling of kind of what they were describing when the fronts go off and you get more understeer. Once I felt that, I thought it was maybe a bit early, but I thought it was the right decision to say, hey, I think we should come in.

“Thankfully it ended up being that way, and yeah, great stop to get me back out there and then try to stay on the track and reap the benefits.”

Not every strategic decision was correct, however. As a light drizzle started on the frontstretch under a caution period later in the race, 13 drivers on the lead lap pitted, all of them putting on slick tires, hoping that the rain would not intensify. Realizing their mistake shortly thereafter, Herta and nine of those drivers pitted again for rain tires.

Herta would be the first driver on wet tires behind the three drivers that stayed out and inherited the lead as conditions worsened.

Bryan Herta regretted the call to go on slick tires as Rinus VeeKay spun under caution, but offered words of wisdom on the broadcast while operating as race strategist for his son.

“If we’re wrong, we’re all wrong together at least, so we’ll see what happens,” Herta said. “I’m glad I’m not out there right now.”

Nice breakdown of Colton’s win. His car control and speed was awesome!

What a crazy, crazy race! I wouldn’t want every race to be like this, but hats off to Colton getting the job done under the most unusual, and difficult, circumstances!