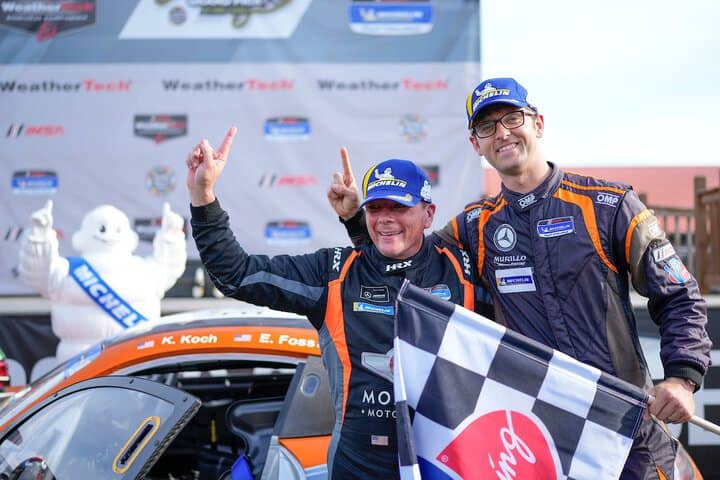 Murillo Racing’s Eric Foss was able to stretch his fuel for the final 58 minutes of the race and hold off VOLT Racing’s Trent Hindman to win the IMSA Michelin Pilot Challenge Mid-Ohio 120 for himself and Kenton Koch.  It is Murillo Racing’s first win of the year and only their second in the Grand Sport class, where they’ve raced since 2018.

“[Saving fuel and holding Hindman off] were both very challenging for us,” Foss told NBC Sports’ Brian Till.  “It came down to the last couple of laps.  [The crew] kept saying that we didn’t have enough fuel, then [Hindman] got close enough and I had to go to hold him off.  I’ve raced with Trent a bunch of times and he [races] clean with a ton of respect.  Having [Kenton] Koch with me here is awesome as well.”

Koch started from the pole for the second straight race and managed to hold the advantage.  Meanwhile, trouble struck further back as PF Racing’s James Pesek had contact with the Ford Mustang GT4 of KohR Motorsports’ Bob Michaelian in turn 5, spinning out Michaelian and causing a scramble.  Further back, TCR polesitter Tiago Monteiro ran into the back of TeamTGM’s Ted Giovanis.

While a number of drivers went off the road and kicked up a bunch of grass, covering their grilles,  Monteiro was the real loser here.  The contact he made with Giovanis broke the front suspension on his LA Honda World Racing Honda Civic Type-R.  He was disabled in the middle of the road, resulting in the race’s first full course caution flying.  Unfortunately for Monteiro, his Michelin Pilot Challenge debut ended right there, less than a lap into the race.

The scramble on the start resulted in a Murillo Racing one-two with Koch leading teammate Kenny Murillo.  Together, they tried to pull away from the pack.

19 minutes into the race, the second full course caution flew when CarBahn Motorsports with Peregrine Racing’s Mark Siegel rubbed against the Hyundai Elantra N TCR of AJ Muss at the braking point for turn 4 at the end of the backstretch.  Siegel then lost control under braking and crashed into the wall.  The yellow brought a number of teams to pit road to get off strategy.  In addition, tire wear has been substantial at Mid-Ohio, so fresh tires would be a benefit for many.

Koch and Murillo stayed out and still managed to pull away from the pack.  However, there were no more cautions after the Siegel crash.  Teams would be forced to save fuel nearly all the way to the finish.

Koch pitted with 59 minutes remaining for tires, fuel and to switch to Foss.  Murillo pitted two laps later, while Turner Motorsport’s Dillon Machavern, who stopped during the second yellow, was another couple of laps later.  The Turner crew seemed to have some issues getting their BMW M4 GT4 full of fuel.  This issue came back to haunt Bill Auberlen later on.

After the stops, Foss ended up with a nine-second lead over KohR Motorsport’s Nate Stacy.  Murillo Racing’s Christian Szymczak, Hindman and Rennsport One’s Stevan McAleer were right in the mix as well.

Szymczak tried to take second from Stacy and actually cleared him in turn 5.  However, Stacy attempted to get back alongside and contact was made, resulting in Szymczak spinning out in turn 6.  Stacy was not penalized for this incident, while Szymczak dropped back to ninth, out of the hunt for the win.

With 33 minutes remaining, Hindman was able to get second from Stacy.  By that point, he was 13 seconds behind Foss.  What followed was a substantial charge from Hindman as Foss was saving fuel.  Hindman methodically knocked a half-second or more a lap off of Foss’ advantage.  As a result, Hindman caught up to Foss’ orange and black Mercedes with a little more than 10 minutes to go.

A fierce battle erupted.  Hindman tried multiple times to get to the inside of Foss, most notably in turn 6.  Hindman got completely alongside Foss in the Madness section, but could not clear the Mercedes.  Eventually, Foss was able to open a small gap as Hindman was literally waiting for Foss to run out of fuel.  That did not happen as Foss and Koch took the win.

Foss and Koch’s margin of victory was seven-tenths of a second over Hindman and Alan Brynjolfsson.  Riley Motorsports’ Andy Jakos was third on the final lap when he ran out of fuel.  That gave third to McCann Racing’s Andrew Davis and Michael McCann Jr., nearly 27 seconds back.  Stacy and Luca Mars were fourth, while Murillo and Szymczak recovered from their spin to finish fifth.

TeamTGM’s Hugh and Matt Plumb were sixth in their Porsche, followed by Pesek and Chad McCumbee.  Turner Motorsport’s Robby Foley and Vin Barletta were eighth, while Rebel Rock Racing’s Frank DePew and Robin Liddell were ninth.  Sheena Monk and Kyle Marcelli in the second PF Racing Ford rounded out the top 10.

Auberlen ran out of fuel coming to the white flag, resulting in him and Machavern finishing 21st.  Jakos was credited with a 15th-place finish while McAleer slowed to a stop on the pit straight and was credited with 16th.

In TCR, Monteiro started from the pole, but immediately met the end of his day.  When that happened, Bryan Herta Autosport’s Parker Chase took over the lead.  He ran fairly well at the front of the field, but chose to stop during the second caution.  By virtue of staying out, the Honda of VGRT’s Victor Gonzalez Jr. ended up in the lead.

Pitting only dropped Chase down to third in class as a number of others followed him down for fuel and tires.  Within a lap of the restart, Chase was right up on Gonzalez for the lead.  It didn’t take long for Chase to retake the top spot as Rory van der Steur in his family-owned Hyundai Veloster N TCR followed past into second.

JDC-Miller MotorSports’ Chris Miller topped the timesheets in class early on in the weekend, but his day came to an end 40 minutes into the race when he was hit in the right rear by HART’s Steve Eich in the Keyhole.  Miller spun into the gravel, but was able to continue.  The contact did bend the right rear suspension, which put him out.  Eich was already laps down due to a hose coming loose on the pace laps that cut the car’s boost.  The contact cut Eich’s left front tire and additional collateral damage put him out as well.

A three-way duel developed for the lead between Chase, teammate Gabby Chaves and van der Steur.  Chaves tried to go to the outside in turn 4 and briefly had the advantage.  Then, van der Steur made a move in turn 5 and made contact with Chaves.  Chaves went off into the grass while van der Steur went into the class lead.  Unfortunately, IMSA officials didn’t like that much.  Van der Steur was assessed a drive-through penalty for avoidable contact, dropping the No. 19 Hyundai to ninth.

The penalty put Chase back in the lead in class, an advantage that he held until mid-race pit stops.  Once Harry Gottsacker got in the No. 98, he was able to pull out to a seven-second lead.  Bryan Herta Autosport had a 1-2-3-4 in class with Ryan Norman leading Michael Lewis and Tyler Maxson.  Road Shagger Racing’s Jon Morley was close behind the Hyundai battalion.

Morley was able to make progress into the Hyundai juggernaut, but was unable to prevent Gottsacker and Chase from taking their first win of the year.  They ended up 20th overall, seven-tenths of a second ahead of Lewis and Taylor Hagler.  Morley and Gavin Ernstone were third, followed by van der Steur and Tyler Gonzalez, who recovered from van der Steur’s drive-through penalty to finish fourth.  Victor Gonzalez Jr. and Karl Wittmer were fifth.

Michelin Pilot Challenge teams will be off for the next six weeks.  The fourth round of the season will be at Watkins Glen International on June 25.  Frontstretch will be on-site to provide you coverage from the 3.4-mile road course.