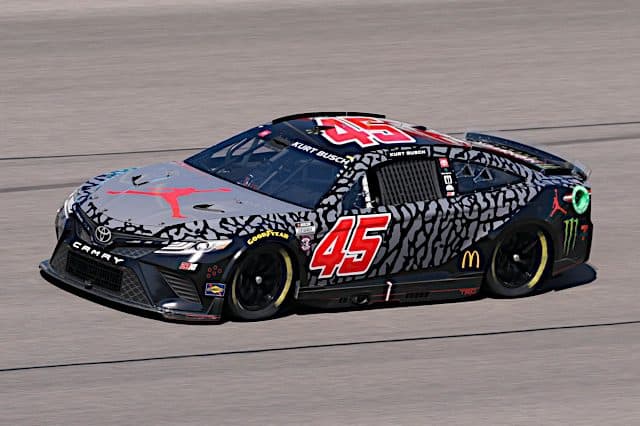 Kurt Busch took the lead from Kyle Larson with just nine laps to go in Sunday’s (May 15) AdventHealth 400 at Kansas Speedway. As the two former NASCAR Cup Series champions skated through lapped traffic, Busch put his slick-looking Jordan Brand No. 45 Toyota to the inside of Larson’s Hendrick Motorsports No. 5 Chevrolet. Busch nosed ahead, and as the cars came off turn 2, Larson lost grip. The No. 5 slid up into the outside wall while the No. 45 vanished into the Kansas City sunset.

The win was the 34th of Kurt Busch’s career but his first of the 2022 season, his first at Kansas, and his first driving for both Toyota and 23XI Racing. It will unofficially lock the 43-year-old into the playoffs as Busch won for the fifth different team and fourth manufacturer in his Cup career.

Celebrating with the fans on the front straightaway, a jubilant Kurt Busch summed up his race to FOX Sports’ Jamie Little.

“. . . This is 23XI,” Busch explained, crediting the win to solid teamwork. “This is our first win for the [No.] 45 car, and with Jordan Brand on the hood, I meant I felt like I had to play like the GOAT, race like the GOAT.”

"With @Jumpman23 on the hood … I felt like I had to race like the GOAT."- @KurtBusch pic.twitter.com/BoUS20SNvn

Busch’s win proved popular on pit road with several drivers coming by to congratulate him, including brother Kyle, Tyler Reddick and Denny Hamlin, who also doubles as car owner. Indeed, Hamlin spoke more as 23XI co-owner than fourth-place finisher, saying afterward, “I’ve never had, certainly, this kind of feeling, even for a win for me, much less when I didn’t win.”

What a moment for @KurtBusch and @dennyhamlin.

Hamlin was fighting back tears during the interview, emotions he later took to Twitter.

Kyle Larson, Kyle Busch, Denny Hamlin and polesitter Christopher Bell rounded out the top-five finishers, followed by Martin Truex Jr. and Ross Chastain. Ricky Stenhouse Jr. in eighth got his third top-10 finish in as many weeks while Alex Bowman finished the race in ninth. Bubba Wallace came home tenth, recovering from a tire violation to earn his first top-10 finish since the Daytona 500.

Tire problems had plagued Kansas in practice and qualifying this weekend; three cars failed to post a qualifying lap after flat left rear tires. Those issues transferred over to the race almost immediately; polesitter Christopher Bell led the way for much of the first stage until a flat left-rear tire while leading the race under caution cost him the top spot.

Bell’s Joe Gibbs Racing teammate Kyle Busch restarted on lap 68 as the first car with four fresh tires. After biding his time in the top five all afternoon, the younger Busch brother snatched the lead and held off Chastain to the green-and-white checkered flag. It was the first stage win of Kyle’s 2022 season.

William Byron started the second stage with a daring three-wide pass for the lead on Truex and Chastain, becoming the second driver on the day to lose a left rear tire while leading. Kurt was in position to take advantage of Byron’s misfortune, going to the point for the first time all afternoon.

Despite a caution for Kevin Harvick breaking up a cycle of green-flag pit stops, Kurt didn’t look back, winning his first stage since Atlanta last summer. Busch’s No. 45 remained the fastest car, fending off challenges on multiple restarts from Larson and brother Kyle.

With 86 laps to go, Larson put a slide job on Kurt Busch for the race lead – a slide job in the most literal sense. The No. 5 broke loose in the middle of the turn, but Larson kept his foot in it. Larson kissed the wall with the rear bumper and slid down to the apron; somehow, he kept the car moving in the right direction, and the track stayed green.

Through all the smoke, Kurt Busch scooted right back past him on the apron to reclaim the top spot, a position he held until the final caution of the day triggered yellow-flag stops. Kurt fell to third, restarting behind Larson and his brother and had to methodically work by both drivers over the final 35 laps of the race.

Outside of the great racing up front, wheel and tire issues persisted as the story of the day. Bell, Byron, Daniel Suarez, Reddick, Truex and Chase Elliott all suffered flat tires while running in or near the top five. Justin Haley lost a wheel on an early pit stop and suffered a fire in the wheel well.

It was Erik Jones’ stuck lug nut, though that drew the most attention. The right-rear lug nut on the No. 43 was cross-threaded on an early pit stop, and his Petty GMS Motorsports crew pulled out breaker bars, sledgehammers and disc cutters to try and break it loose. But no matter what they tried, that center-lock lug nut stayed tight. Eventually, they took a sawzall to the BBS aluminum alloy itself, getting enough clearance to saw off the stuck nut and get Jones back on the track with four fresh Goodyears, albeit seven laps down.

That was a wild one. @JamieLittleTV talks with James Houk of @PettyGMS about the issue at Kansas. pic.twitter.com/TU5So5c5pO

Kansas marked the halfway point of the regular season, and next week, the Cup Series takes a break from points racing. Sunday, May 22 the stars of NASCAR head to the Lone Star State for the NASCAR All-Star Race at Texas Motor Speedway, airing at 8 p.m. ET on FOX Sports 1.

Heck of a day for 23Xi! A win for Kurt and a top 10 for Bubba (could’ve been a top 5 had his pit crew not fallen asleep as usual) Shame for Byron, Elliott, Reddick, and Suarez that their tires blew. This was a great race that was slightly tainted by all the tire failures. Goodyear needs to do better.

I’ve been waiting for this. Good job to Kurt and his team. I was hoping with a new car and Gibbs equipment, Kurt would learn fast. Happy for Kurt.

It really was a good race. The hard racing in the third stage between Kurt Busch and Kyle Larson was intense, but clean. And Larson left it all on the track (and on the wall). Kudos to Kurt. The veteran got it done.

Another “special” Nascar win. The first time the car is covered in the iconic Michael Jordan logos. Kurt leads a bunch of laps for TV time and then wins the race. Gotta keep Mike happy so he stays in Nascar and bring in those new fans. Bubba already got his “special” win, and do you notice he only runs well on the tracks Nascar has more of a hand in the inspection process.

From getting straightened out by Jimmy Spencer, to Nascar champ, to police altercation in Phoenix, to crazy fiancé/ girlfriend, to different teams and different makes of cars to the wins in each situations and years, to being still one of the most likable drivers in the circuit, where I was at the edge of my seat rooting him on to win Sunday, this is what my Nascar legends are made of. Thank you Kurt!