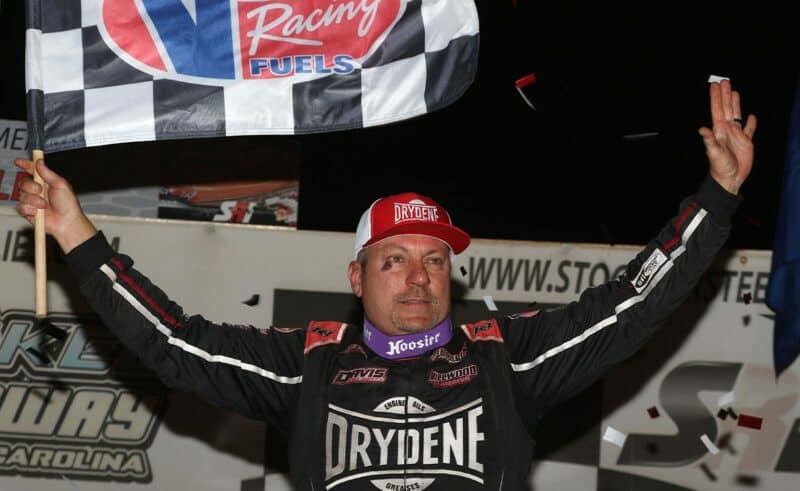 Chris Madden continues to get rich on the XR Super Series tour, grabbing another $50,000 by winning the Colossal 100 feature at Charlotte with help from lapped traffic.

Jonathan Davenport led 45 of the 50 laps on Saturday (May 14), but his inability to get around the lapped car of Brett Hamm opened the door for Chris Madden, who snuck around a three-wide situation with Davenport and Hamm to drive off to the win, his fourth XR Super Series victory in nine starts.

With a late race pass to take over the lead, @chrismadden44 leads the rest of the way @TheDirtTrack to 𝗪𝗜𝗡 tonight’s @raceXR Super Series #Colossal100! pic.twitter.com/Htu4rXumjJ

Davenport, who started from the pole and ran away from the field early, was driving a masterful race, not only keeping Madden behind him but also stroking his pace just enough to avoid coming into contact with faster lapped traffic. However, Hamm proved to be a thorn in Davenport’s side, and Madden had a birds-eye view from second to make his charge for the race win.

We’ll stick with Madden for a second. The progress that his No. 44 team has made, going from last year’s World of Outlaws late model runner-up that was constantly stymied by Brandon Sheppard to the fastest, winningest super late model team in America is staggering. What’s more, they seem to have found a fitting home on the XR Super Series tour, winning four of the first nine races.

It's the Chris Madden Super Series presented by @raceXR

Madden also had a ridiculous average finish of 1.67 during the three nights of the Colossal 100.

The only driver not named Chris Madden to score top 10s in all three Colossal 100 features this weekend was Mt. Holly, N.C.’s Chris Ferguson. Ferguson finished third in Saturday’s finale and was within striking distance had Davenport and Madden taken a step out of line.

It wasn’t a duplicate of his Outlaws win at Cherokee earlier this year, but Max Blair caught my eye Saturday night with a top-five finish that saw the WoO rookie doing battle with Brandon Overton in the closing laps. Moving down south has played nice with Blair, who will be riding momentum into the Outlaws approaching push into his home state of Pennsylvania.

Shane Clanton’s results at Charlotte weren’t terrible (he finished sixth in the Colossal 100 feature Saturday night) but he certainly seemed to have the most unpopular driver title wrapped up by Thursday night. Tangling for the second time in as many events with a driver in a No. 7 car, both Ross Robinson and Ricky Weiss took exception to Clanton’s driving at pit road exit after their heat race Thursday (remember, Weiss and Clanton were both disqualified at East Alabama last week for scuffling on track).

Drama in the final heat race! 😡@RRacing7 and @weissracing7 both take a turn at showing their displeasure with Shane Clanton. @raceXR #Colossal100 pic.twitter.com/NGQNi23NoX

Robinson wasn’t done either, blocking Clanton’s car in the pits to have a word.

Getting feisty in the pit area at Charlotte.

Hometown driver GR Smith capped a difficult week for his Gambler’s Transport race team, blowing a right-rear tire and pounding the turn 3 wall in the final heat race Saturday night while in a transfer spot, leaving him to miss two of three features at Charlotte. Smith’s struggles, when added to Ashton Winger’s multiple misfortunes driving the team’s flagship No. 89 car at Illinois Speedweek, capped what can only be described as a lengthy disappointment.

It didn’t top the entry list for Flo Racing’s Illinois races, but credit where it’s due nonetheless, as the three race programs run as part of the Colossal 100 drew an average of 49 super late models a night. Reason No. 875 the XR Super Series need not return to Bristol in 2023.

$50,000 to win the race and the XR crew has track maintenance applying kitty litter out of a sack by hand the length of the turns?! Even if there was a reason for that… not a great visual.

I’m still not a fan of the scoring graphics that RaceXR makes use of, but the additional flag graphics that came online for Saturday’s Colossal 100 broadcast were a welcome improvement. Next, can we fix whatever flaw had seemingly every other last name get repeated in the running order? (Tim McCreadie I know for a fact doesn’t drive the No. 0 car.)

Continuing a longstanding Charlotte Motor Speedway tradition of doing everything unnecessarily large (I still find the four-wide dragstrip blasphemous) the Colossal 100 feature gave the fans a six-wide salute during the pace laps, a demonstration that saw inside lane drivers clipping the grass and cleaning their tires after the salute was over.

I might not be able to come up with six criticisms of this gimmick, but I certainly rolled my eyes a half-dozen times. First, this wasn’t even a unique stunt, the Pittsburgher Lucas Oil race did it just last fall, and the year before that. Further, the Colossal (100?, more on that later) is a big event, but it’s not big enough to justify that. Hell, I’d go as far as to argue that an event in year five of its existence doesn’t command a four-wide salute.

Most of all though, I don’t think this was the visual that XR thinks it was. Six-wide may look insane facing the field, but from the Charlotte frontstretch grandstand, all there is to see is four rows of cars on a larger oval. Colossal failure is what I’d call this stunt, though there were fortunately no issues with competitor tires as a result like Stewart Friesen experienced at Bubba Raceway Park last year.

I’m thrilled that the Colossal is back, really. Having a major late model race at Charlotte that’s not intrinsically tied to the World of Outlaws brand is a good thing. But why the hell was a 50-lap feature dubbed the Colossal 100? Even if there was a reason other than precedent, I won’t be convinced by it. All four previous iterations of this race actually went 100 laps. Don’t want to host a 100-lap race? Fine, I agree that’s too damn long for a late model feature. But stick to the name Colossal. That’s plenty marketable.

Let’s give XR some credit for two moves they made over the course of the Colossal (we’re dropping the 100 from here on) weekend that make a lot of sense for their fledgling tour. One, the tour opted to more uniformly distribute purse money through the top-10 finishers, a move that makes a lot of sense for any tour seeking to maintain car count. Second, and more important, the XR Super Series made a scheduling move with their upcoming Texas Dirt Nationals to deconflict with the LOLMDS.

Race XR moves one of it's dates and it now allows every full-time driver for their national super late model tour to race both it and the #LucasDirt series: https://t.co/7eczEKLm4G

In one of the rarest instances, I’ll borrow from NASCAR on FOX. “Coopitition” is a beautiful thing.

13 – years between Saturday’s Colossal 100 and the previous running of the event.

15 – cars that finished on the lead lap of Saturday’s Colossal 100.

Where it Rated (on a scale of one to six cans with one a stinker and a six-pack an instant classic): We’ll give the return of the Colossal 100 three and a half Red Oak Battlefields. It was good to see this event come back, and the field of cars that it drew was a smorgasbord. Despite all that, though the racing really was underwhelming until Saturday’s closing laps.

Up Next: Thinkin’ Dirty will be taking the weekend off, as I’ll be on family transit duty to and from Charlottesville, Va. to see my fourth sibling graduate from college. See y’all over Memorial Day Weekend for a recap of all the racing not at Charlotte or Indy.