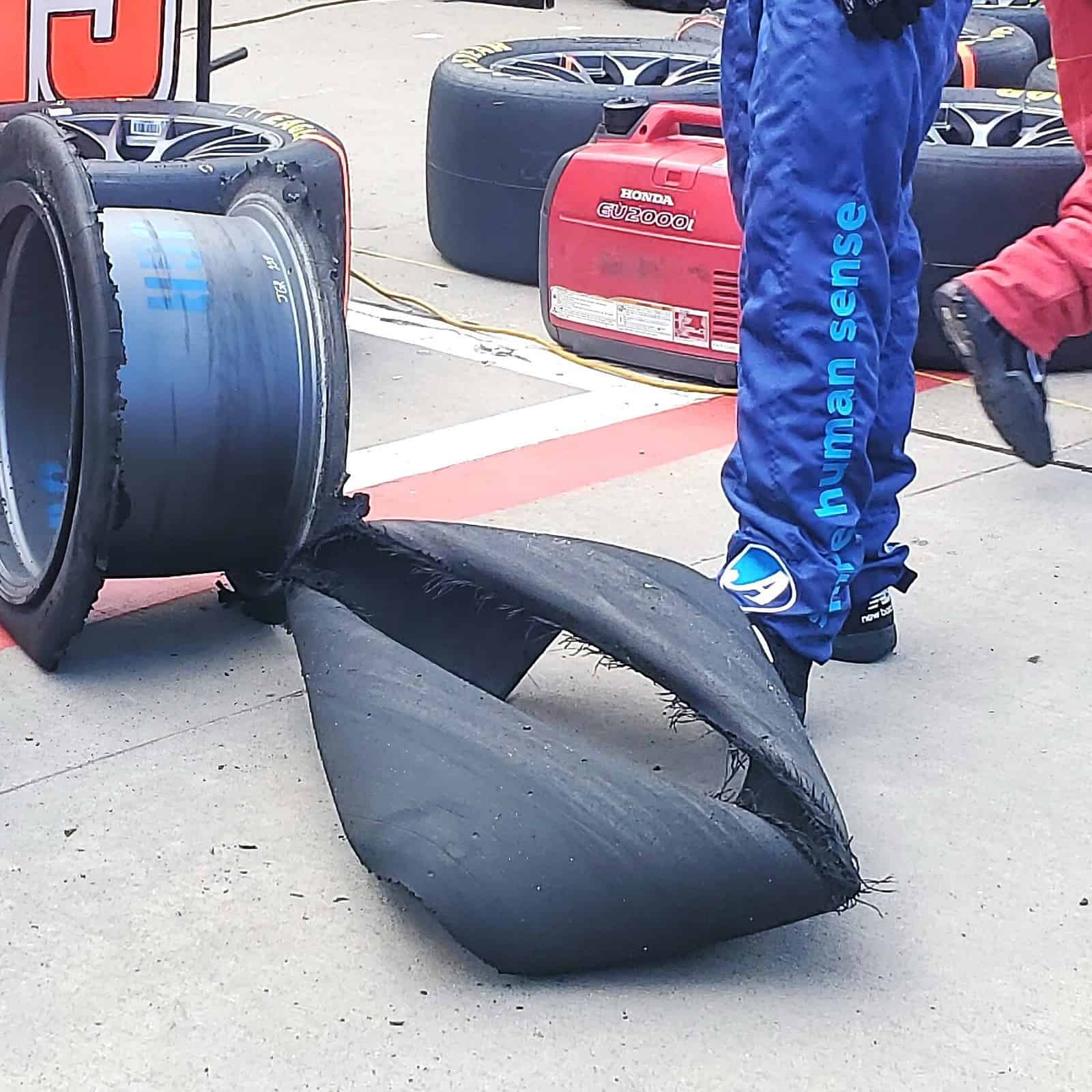 It’s something that’s weaved its way into NASCAR Cup Series races throughout the 2022 season. From cars getting stuck on the track after getting a flat tire earlier this season to wheels completely coming off, it’s been a topic of discussion more than it should be.

That was the case again this weekend at Kansas Speedway.

It began Saturday (May 14) when drivers practiced for the AdventHealth 400. Five different teams suffered failures during the short session, an outcome Goodyear was already concerned about. Their notes earlier this week emphasized the importance of minimum air pressure.

“The amount of air pressure in the tire should directly correlate to the amount of load on that corner of the car,” Goodyear Director of Racing Greg Stucker said. “If the amount of load increases – like it has on the left-rear of this Next Gen car – you need to increase the load-carrying capability in that tire, which is done via air pressure. If you run below our recommended pressures, the tire can over-deflect, sustain damage and result in an air loss.”

Despite that warning from Goodyear, teams pushed the envelope and suffered the consequences. Buescher and Joey Logano were both forced to go to backup cars after damage suffered with their problems during practice. Denny Hamlin, Ryan Blaney and Ricky Stenhouse Jr. also experienced issues in the session but were able to repair the damage done instead of going to a backup.

Fast forward to race day and it didn’t take long for tire failures to begin once again. BJ McLeod was the first to fall victim.

Our team wants to extend a big thank you to General Formulations for their support and we look forward to @TXMotorSpeedway ⭐️#NASCAR pic.twitter.com/zNmC95aJXh

Daniel Suarez, Chase Elliott, William Byron and Martin Truex Jr. were also forced to make unscheduled pit stops with tire failures, though Suarez and Elliott were the only ones who drew the yellow with their problems.

Once again, Stucker reiterated the issue was with the teams’ decisions on air pressure and not a problem with the tire itself.

“Everybody’s trying to find their sweet spot, their combination of air pressure, camber, understand their loads,” Stucker explained during the race. “If there’s more load, there’s obviously more deflection just like there would be for a spring. I always equate it to a paperclip. If you flew a paperclip over and over and over and you flex it too much, eventually it fatigues.

“And that’s exactly what happens when the tire gets overdeflected. We think this is the right tire for the application, given what we know about tire engineering. The materials we use, the placement of components, its ability to carry load, its ability to perform and provide the grip that it needs. You go back to what’s the application and make sure that it’s used correctly.”

And while most of the drivers who suffered failures were able to head back to pit road, Suarez and Elliott weren’t so lucky and needed a little assistance to get rolling again. Both drivers were vocal about getting pulled instead of pushed.

Caution for Daniel Suarez. Spins out, tires flat on pit road and now #NASCAR is dragging the car. Suarez furious.

"Is this stupid or what?! I just need a push! What the f***k are they doing? The left rear is flat, now they're killing the whole thing." #AdventHealth400

But why exactly didn’t the tow truck just give both drivers a push and send them on their way? The answer isn’t complicated actually after a quick conversation with NASCAR officials. The tow truck that initially got to the No. 99 was not asked to give Suarez a push at first, while the one that was sent to help Elliott got stuck in the mud.

Then, there was the matter of Erik Jones, who experienced a whole different tire problem altogether.

Ugh, @Erik_Jones bit by bad luck under Stage break as the right rear tire would not come off 🤬

While that tweet from the team makes it sound innocent, it was much more bizarre as the right rear tire was stuck on the car for more than 10 minutes before the crew was able to remove and replace it, an issue that had everyone scratching their heads.

Have you tried one of those rubber jar opener grips to try and get it off, @PettyGMS?

In fact, it was so strange that several crew members from other teams stopped by to find out exactly how the team managed to get the lug nut removed and what may have caused the issue in the first place.

Crew members from several teams showed up to the 43 pit stall to try to see what happened that caused the tire to get stuck. #NASCAR pic.twitter.com/aGfgzYoSnc

After the race, rear tire changer Justin Fielder offered an explanation as to what exactly happened to make that tire nearly impossible to remove.

No thread. Skipped off the cap the stop before & got the nut too tight. Has happened before, but didn't create this big of an issue. Screwed the day for Jones & our guys. Sucks that a small mistake like that has such big consequences. My fault, will make changes for the future.

It seems logical enough but doesn’t change the fact that Jones’ race wound up ruined. He finished the day in 32nd, some six laps off the pace after flashing top-10 speed and earning stage one points.

Ultimately, the tire issues throughout the weekend can be attributed to teams pushing the envelope and trying to gain an edge on their competition. Despite those failures, it’s good to see them being forced to balance tire wear against performance, bringing back some unpredictability that had been missing with the Gen-6 car.

Goodyear is going to need people to check tire pressures before the cars go on the track. That would show if it is the low pressure that is causing the failures. It is like car manufacturers setting a recommended tire pressure figure after a LOT of testing.

I guess if you’re in & around racing long enough you’re liable to see about anything. And I’ve seen my share of head scratchers. But I’d never seen a crew have to saw a wheel off.

It did ruin their day, but it was way cheaper than wrecking. And it got their new sponsor some air time, the Petty GMS cars are both showing lots of improvement.

I was cringing the entire time the 43 crew was trying to remove that center nut. When the big guy hit the chisel with a sledgehammer in an attempt to split the nut, the chisel went flying right by the face of the one guy kneeling at the tire. Don’t think any had any eye protection on. I work in a large power plant and safety behavior like that would get me fired on the spot. Thankfully no one got hurt this time.

I’m not so sure it was all tire problem. Every one of those tires peeled over the wheel. Thats why all the tubes were coming out. Maybe there is also a problem with the wheel seal.

Its all air pressure not the wheels not the tires not the center wheel nut its teams trying to run to low tire pressure. When the teams quit screwing theirselves this will end for most of them but there will still be some teams willing to push the envelope. It happened for years with bias ply tires bf they went to radial tires.