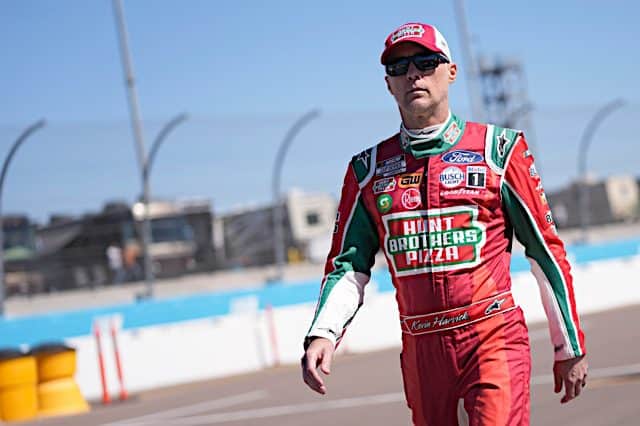 Halfway through the regular season of the NASCAR Cup Series, parity continues to reign supreme. Kurt Busch’s victory at Kansas Speedway on Sunday made him the 11th different winner so far in 2022. Only William Byron and Ross Chastain, each with two wins, have scored multiple victories.

The list of winners this year features several of the drivers among the top 10 in overall points, but also a few others like Busch, Denny Hamlin and Daytona 500 winner Austin Cindric who have battled through up-and-down seasons. After watching Hendrick Motorsports roll over the competition at the end of 2021, this Gen-7 car appears to have leveled the playing field, at least for now.

A variety of winners to start the season means playoff spots are filling up quickly. Since race winners get first priority for postseason qualification, the 11 winning drivers of 2022 have likely punched their tickets to the playoffs already. There may only be five spots left for anyone else with hopes of participating in the postseason.

As the year continues, chatter about the possibility of reaching 16 or more winners before the playoffs will heat up. However, fans should not expect this scenario to happen. Since NASCAR implemented the elimination-style playoffs in 2014, the Cup Series has never had 16 different winners during the first 26 races. There have been a few seasons since then that started out like this one, where no single driver appeared to have a clear advantage on the rest of the field. Yet every time, the crème rose to the top during the summer months.

Just last year, there were 11 different winners through the first 14 races, and the buzz about a winner getting left out of the playoffs took off like a rocket. Then, Kyle Larson made like a rocket himself and won the next three races. The 2021 regular season concluded with 14 unique winners, 13 of which were playoff eligible. It ultimately took until Bubba Wallace’s victory at Talladega Superspeedway, the 31st race of the season, to produce 16 unique winners. Although it is fun to speculate who might win their way into the playoffs, history suggests there will not be 16 drivers who take that path.

Instead, it is far more likely that a few drivers will qualify for the postseason on points. For those that do not have a victory to their name, building points over the next few weeks will be crucial for reaching the playoffs. Among the winless drivers, Ryan Blaney has been the best of the bunch. The No. 12 team is currently 112 points above the cutline and second in the overall standings.

In fact, Blaney is 52 points behind Chase Elliott for the overall points lead. If Blaney were to take the points lead and hold it through the end of the regular season, he would secure a playoff spot even without a win. But knowing that there will probably not be 16 or more winners, Blaney is still in good shape for the postseason.

For everyone else, the situation ranges from dicey to desperate. Consider Martin Truex Jr., Kevin Harvick and Brad Keselowski, three former champions who have been staples of the playoff field over the years but are all still winless this season.

Truex is 89 points above the cutline and not in imminent danger, but a win would go a long way to getting the No. 19 team into the postseason. Harvick is 24 points above the cutline and looking for a win not just to get to the playoffs but break a long winless drought. Keselowski is 146 points below the cutline, largely thanks to a 100-point penalty incurred earlier this year. Winning a race is the only realistic path for him to reach the playoffs.

Of those three drivers, only Truex appears close to winning. Harvick is still capable of getting good finishes almost everywhere, but he has struggled to find race-winning speed over the last year and a half. Keselowski has not seriously challenged for a win anywhere other than in the Daytona 500. As he tries to rebuild RFK Racing, winning the regular season finale at Daytona may be Keselowski’s best shot to get to the playoffs.

It’s not just veterans who are running out of time to secure postseason spots. Tyler Reddick was one of the few who reached last year’s playoff without a victory. Last month, he appeared to have a playoff berth and his first win well in hand at Bristol. However, contact with Chase Briscoe on the final lap while racing for the lead cost them both the race. If Reddick does not win in the next 13 events, that final lap on the Bristol dirt could prove even more costly.

Reddick’s Richard Childress Racing teammate Austin Dillon has bounced in and out of the playoffs his whole career. Dillon was one of the top 16 drivers in overall points at the end of the regular season last year. Yet the No. 3 team lacked a victory, keeping Dillon from reaching the postseason despite what was a solid resume. Currently the first driver out, 11 points below the cutline, he will be right in the thick of the playoff points battle once again in 2022.

Plenty of other drivers have a chance to reach the postseason in a year where parity reigns supreme. Christopher Bell and Aric Almirola are the other two drivers currently above the cutline. Bell is 48 points to the good while Almirola is now on the bubble, 11 points ahead of Dillon. Both Bell and Almirola won their way into the playoffs last year, although they are running out of opportunities to do it this season.

Meanwhile, the other drivers below the cutline include Reddick (-22), Erik Jones (-32) and Daniel Suarez (-49). They would have a lot of ground to make up to get to the playoffs without a win, but the opportunity is still there.

Anyone else would likely need a win to get to the playoffs. But the list of other drivers includes Wallace, Chris Buescher, Justin Haley, Michael McDowell, Ricky Stenhouse Jr. and Cole Custer. While all of those are longshots at this point, each of them has won at least one Cup Series race. And during a season when the week-to-week fortunes of race winners have been turning on a dime, it is hard to count anyone out right now.

The only thing for sure is that time is running out, and things are going to get very uncomfortable for the winless drivers over the next few weeks. As the season progresses, pay close attention to the battle among Bell, Harvick, Almirola, Dillon and Reddick. Those five drivers will probably wind up fighting for the last three playoff spots, assuming Blaney and Truex take the other two. Who gets in, and who doesn’t, may go down as one of the biggest stories of the 2022 Cup Series season.

I’ve been looking over the standings, & I also doubt that there will be 16 winners. But I do think 15 is likely, but I wouldn’t be shocked to see 16, just surprised.
Either way, no team W/O a win can be comfortable.

Anything is possible with NA$CAR “rules” that are written in disappearing ink for different teams.