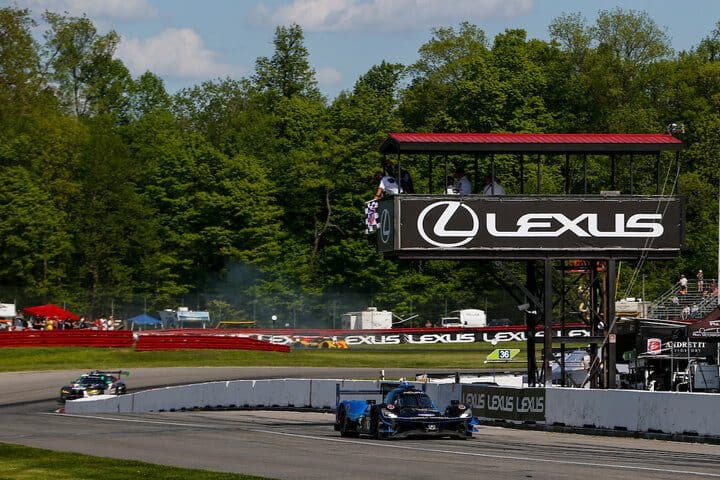 Wayne Taylor Racing’s Ricky Taylor was able to snatch the lead away from Chip Ganassi Racing’s Renger van der Zande Sunday (May 15) with a little more than an hour to go in the Lexus Grand Prix at Mid-Ohio.  From there, he was able to hold on to the advantage outside of pit stop windows to win for himself and teammate Filipe Albuquerque.  It’s the team’s second consecutive victory of 2022.

“Awesome.  Ricky just really pulled it out again,” Albuquerque said after the race.  “Ricky was so happy in the end with the car.  I was more relaxed when he said the car was good.  That meant we were in control.  And he pulled it off [beautifully].”

Chip Ganassi Racing’s Sebastien Bourdais started from pole for the third time this season, but appeared to burble just a little on the start.  That allowed Albuquerque to slip past and take the overall lead.

Bourdais was not deterred and stayed right up on Albuquerque.   A few laps later, Bourdais pounced at the Keyhole.  It was a rather rough move as the two drivers had side-to-side contact three times, but Bourdais was able to get through.

Incidents at opportune times were the name of the game on Sunday.  The first round of stops were triggered by a spin by HTP Winward Motorsport’s Russell Ward in turn 9.

Russell Ward puts his Mercedes into the Gritty Kitty. #IMSAatMO

Given the chance that Ward was going to beach himself, a number of teams decided to stop here.  However, Ward managed to extricate himself from the gravel, meaning that no yellow flew.

Taylor got in the Konica Minolta Acura at the first stop and pressured Bourdais when he could.  Early on in the run, Taylor was right on Bourdais with Meyer Shank Racing with Curb-Agajanian’s Tom Blomqvist close by.  As the tires wore off a little, Bourdais was able to pull away, but never by more than a couple of seconds.

80 minutes into the race, Performance Tech Motorsports’ Rasmus Lindh stalled his Ligier JS P320-Nissan in turn 6.  This triggered another run to the pits ahead of what turned out to be the race’s only full course caution.  Here, van der Zande got in the No. 01 Cadillac and ultimately kept the lead.

The restart was Taylor’s time to pounce on van der Zande.  After looking to the inside of van der Zande at the Keyhole, Taylor went to the outside at turn 4 to get the inside for turn 5 at the top of the hill.  Then, trouble struck for van der Zande.

Renger van der Zande did NOT want to give up the lead!

Ricky Taylor gets by him and the No. 01 spins #IMSAatMO

The No. 01 Cadillac was not damaged significantly in the spin, but van der Zande lost all of his track position.  He would no longer be a factor for the remainder of the race.

At first, Blomqvist was Taylor’s primary opposition, but getting caught behind lapped traffic dropped him to fourth.  Action Express Racing’s Pipo Derani then took the fight to Taylor until the final stops.  In the final run, Blomqvist got himself back up to second, but could do nothing to prevent Taylor and Albuquerque from winning.

The margin of victory was 2.098 seconds over Blomqvist and Oliver Jarvis.  Derani and Tristan Nunez were third, followed by Earl Bamber and Alex Lynn in the No. 02 Ganassi entry.  Bourdais and van der Zande had to settle for fifth.

In LMP2, PR1 Mathiasen Motorsports’ Patrick Kelly started on pole and led early.  Then, Kelly spun out in the Carousel a few laps into the race after he had contact with the Vasser Sullivan Lexus of Richard Heistand.

In the second half of the race, Bomarito had to deal with DragonSpeed’s Juan Pablo Montoya.  Montoya was able to run down Bomarito with a little more than 40 minutes remaining.  He then made a dive to the inside of Bomarito in the Keyhole.  Contact was made, resulting in Bomarito spinning out and Montoya taking the lead.

IMSA officials deemed this to be avoidable contact, so Montoya had to serve a drive-through penalty that gave Bomarito the lead back.  Montoya then ran Bomarito back down and retook the lead with 25 minutes to go.  There was more contact when he made the move, but the side-to-side contact did not cause a spin.

Once out front, Montoya pulled away to give himself and Henrik Hedman their first victory in the LMP2 class.  Montoya and Hedman’s margin of victory was 13.652 seconds over Bomarito and Thomas.  High Class Racing’s Dennis Andersen and Anders Fjordbach were third, followed by Tower Motorsport’s John Farano and Will Stevens.  Era Motorsport’s Ryan Dalziel and Dwight Merriman were fifth.

LMP3 saw Andretti Autosport’s Jarett Andretti lead early without any real challengers.  Andretti’s closest challenger was Performance Tech Motorsports’ Dan Goldburg in the No. 38.  Goldburg was able to hold off on his first pit stop for a few laps after Andretti stopped to give way to Gabby Chaves.  Once Goldburg gave way to Lindh, Chaves moved to the point.

Lindh was in second when his car stalled in turn 6 to bring out the first yellow of the race.  The yellow itself actually played a big role in determining the winner.  Riley Motorsports’ Felipe Fraga actually managed to beat Chaves out of the pits to take the class lead.

However, Fraga had to deal with CORE autosport’s Colin Braun.  Braun made quick work of Chaves on the restart, then swept past Fraga to take the class lead with 62 minutes to go.

The strategy from this point was simply when to pit for the final stop of the day.  For Riley Motorsports, it was right when Braun took the lead.  For Chaves, it was with 40 minutes to go.  CORE autosport had other plans.  They chose an ultra-aggressive strategy that would leave Braun out on the track for the entire second half of the race, hoping that tire wear and aggressive fuel saving would give them the mileage necessary to make it.

With his immediate opposition making an extra stop, Braun had a sizable gap to work to his advantage.  In addition, Braun had the overall winners between himself and second place.  As a result, he could slow down multiple seconds per lap.  Ultimately, the No. 54 Ligier JS P320-Nissan was sputtering on fumes, but Braun was able to bring home the win for himself and Jon Bennett.

Due to the aforementioned track positioning, Braun and Bennett ended up a full lap ahead of JrIII Racing’s Ari Balogh and Garret Grist.  Andretti and Chaves were third, then Fraga and Gar Robinson.  MLT Motorsports’ Dakota Dickerson and Josh Sarchet were fifth.

In GTD, Paul Miller Racing’s Madison Snow started from the pole, but was jumped at the green flag by Team Korthoff Motorsports’ Stevan McAleer.  Another driver that put himself into the mix was Vasser Sullivan’s Heistand, racing in a one-off entry with Jack Hawksworth.  However, he got to the front by jumping the start.  As that clearly isn’t allowed, Heistand was forced to serve a drive-through penalty.  The aforementioned contact with Kelly occurred right as Heistand was attempting to make his way to the pit lane to serve the penalty.

Snow dropped back as far as fourth before making his way back forward.  McAleer was strong early on and led all the way to the team’s first pit stop.  It was at that point that the race fell apart for Team Korthoff Motorsports.  A slow pit stop when Mike Skeen got in the car cost the team roughly six seconds on the track, which put Skeen behind Bryan Sellers in the Paul Miller No. 1.

Later on, the team had issues with a wheel coming loose during the race’s only caution, but before the pits opened for GTD teams.  The team had to make an emergency stop to rectify the issue, prior to their regular stop.  The Mercedes was not hurt by the issue, but Skeen ended up way behind the leaders.  Skeen was able to get himself and McAleer up to seventh by the finish.  With Wright Motorsports’ Jan Heylen and Ryan Hardwick finishing ninth, McAleer retook the points lead by 12.

Drivers such as Hawksworth and Rick Ware Racing’s Ryan Eversley led for a time while running on alternate pit strategies.  However, once the final stops were made, Turner Motorsport’s Bill Auberlen was in the lead with Sellers on his tail.  Aaron Telitz was third, but the majority of the class was running hard close behind each other.

The real threat late in the race didn’t come from any of those drivers.  It was from Inception Racing’s Jordan Pepper, who was making his IMSA WeatherTech SportsCar Championship sprint race debut.  Pepper was able to drive his McLaren 720S GT3 from outside of the top five to the front late in the going.

The general thought among the other GTD teams was that Pepper would not make it to the finish on fuel since he stopped five laps before Auberlen did.  Pepper was able to scythe through the top GTD runners and get past Auberlen for the lead with four laps to go.  From there, Pepper was able to hold off Auberlen to take the victory for himself and teammate Brendan Iribe.

By virtue of the penalty, Turner Motorsport’s Auberlen and Robby Foley were declared the GTD class winners.  It is the team’s first win of the year.  For Auberlen, it is his 65th career class victory, extending his own all-time IMSA record.

Auberlen and Foley’s margin of victory was .586 seconds over Sellers and Snow.  Vasser Sullivan’s Telitz and Frankie Montecalvo were third, then CarBahn Motorsports with Peregrine Racing’s Robert Megennis and Jeff Westphal in a quiet fourth.  HTP Winward Motorsports’ Russell Ward and Philip Ellis recovered from a spin into the gravel to finish fifth.

IMSA WeatherTech SportsCar Championship teams have a mixed schedule going forward.  The next race is the Chevrolet Sports Car Classic at Belle Isle Park on June 4.  This race will only be for the DPi and GTD classes.  For GTD, the race only counts towards the WeatherTech Sprint Cup championship and not the full season chase.  The LMP2, LMP3 and GTD Pro classes will be back on the grid at Watkins Glen International on June 26