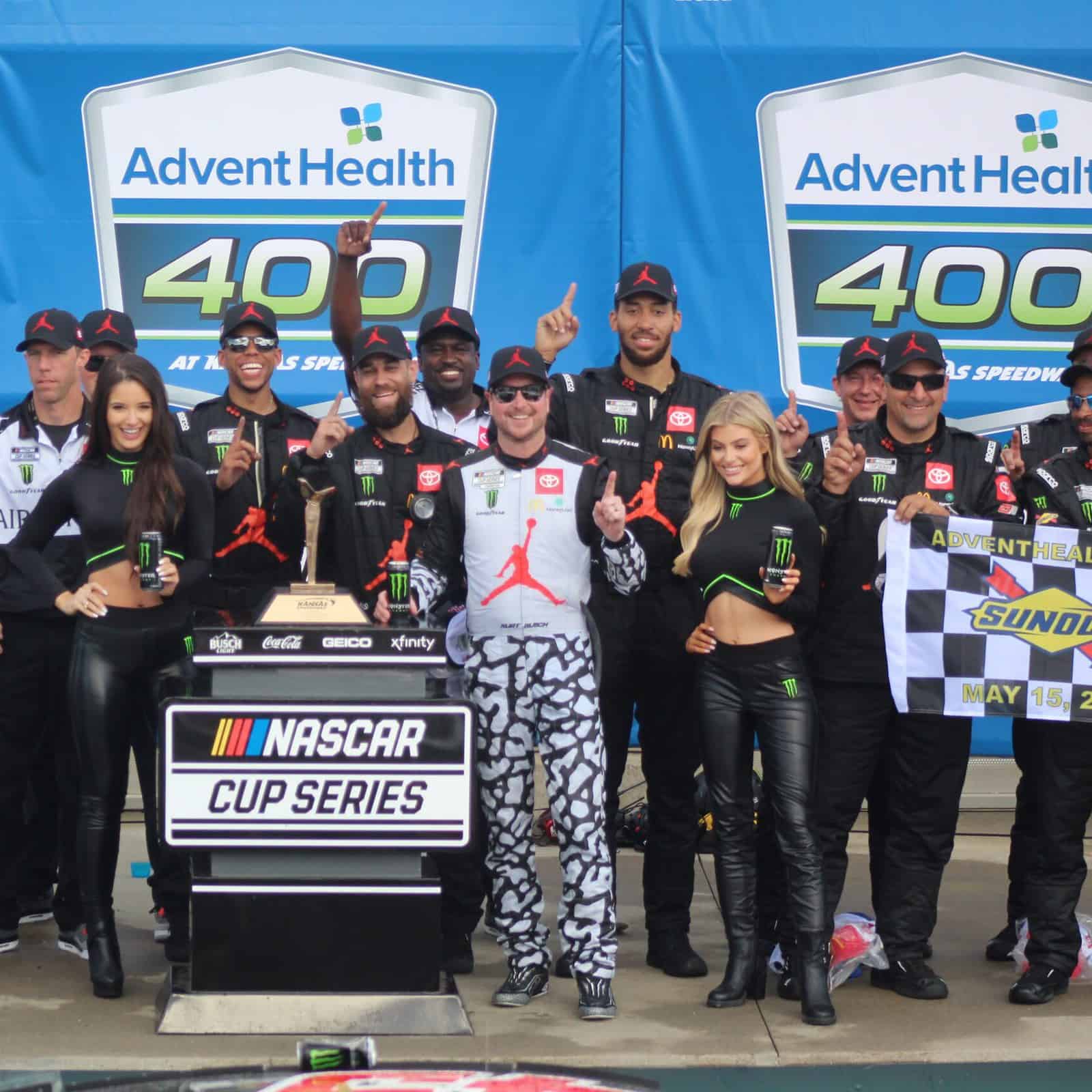 He’s running out of time.

“I know I’m in the twilight of my career,” Busch said Sunday (May 15) after winning the NASCAR Cup Series race at Kansas Speedway, marking his first win in his inaugural season with 23XI Racing.

But that elephant in the room – that he’s closer to the end of his NASCAR career than his meteoric rise – was just one of the many ingredients that resulted in his 34th career win being overrun with emotions.

Not just for him, but for team owner Denny Hamlin.

Hamlin has won a lot in NASCAR, including three Daytona 500s.

But on Sunday, having “a front-row seat” to Kurt Busch’s battle with his brother Kyle Busch and Kyle Larson over the final 33 laps around Kansas Speedway resulted in a “weird feeling” for Hamlin.

“I looked at my lap times and I was doing my job,” Hamlin said after his fourth-place finish. “I wasn’t letting up at all and getting the most out of the car I could, but you just can’t help but be emotional about it.”

The victory, 23XI’s second but the first for it as a two-car operation, came in Busch’s 13th start for the team.

“Certainly, there’s been no win that I’ve had that has equaled the emotions of this one, for sure,” Hamlin said. “I’ve obviously been excited for the Daytona 500, but I just don’t know why this one just feels bigger to me. I think a lot of it is because I watched it live.

“I think had I been on the other side of the track and just kind of looked at the [scoring] pylon it would be one thing, but I had a front-row seat to it. I’ve kind of got a very tough RBF [resting bitch face] and I don’t show my emotion a lot.

“But I am an emotional person. I get emotional when I get around the team guys. I got emotional when I hugged (crew chief) Billy [Scott] at the pit box because I see how excited they are and I know how hard they work. It’s like these people are part of – this is a family. Inside that small building [that] we’re in right now, it is a family. We are all very, very tight, so the wins just feel bigger for that reason.”

.@dennyhamlin said the No. 45 team's win was the most emotion he's ever had for a race win, more than his own.

I asked @KurtBusch what that meant to him.

He briefly became emotional over a "Deja vu moment" – me asking the question.#NASCAR #AdventHealth400 pic.twitter.com/V84jWPcaXU

The significance of that family feeling unexpectedly showed itself later, when Frontstretch asked Busch what Hamlin’s emotional investment in his team’s victory meant to him.

“Hang on a second,” Busch responded, becoming uncharacteristically emotional himself. He paused, briefly turning away in his chair to collect his thoughts.

“Sorry. That was a déjà vu moment,” Busch explained. “There’s things that an owner has to go through that are really heavy, and Denny has chosen this ownership role, and he has done it with integrity and class and ambition and motivation. It’s things I would never want to put myself in position for.

“He called me a year-and-a-half ago, two years, and said, ‘Hey, I’ve got a plan.’ I was, like, ‘If it all works out, I’ll be part of it.’ But, wow, just learning some of the things, being close to him as a friend, but also as a racer, and now he is my boss, there’s a lot that goes into the ownership side.

“That’s why he is overwhelmed with emotions right now, because of how much responsibility it all is and how much teamwork it takes. … I hope that this helps everything as far as the foundation that we’ve laid. With Bubba (Wallace)‘s win last year, that was a huge foundation, and I would say that this is like building the first floor, building the second floor, and the sky is the limit.

“This means a lot to me as well because we started this No. 45 car from scratch and a lot of guys, girls, people came from other teams. The spirit was ‘we’re a bunch of rebels, let’s go do this.'”

What was Busch’s déjà vu moment?

“It was this media center and you asking the question about Denny,” Busch said. “I’m just like, I’m glad we won. This means I was envisioning wins. You have to have the vision to win, and we did it today.”

For Busch, the 2004 Cup champion, Sunday’s victory was the fruition of a career-ending goal.

“To me, this No. 45 car was a special project to leave my fingerprints on something when I’m done racing,” Busch said. “That’s what makes it even more special now that it’s a winner. We’re going to hang up a winning banner flag at 23XI here soon.”

Busch added to this sentiment when asked what it meant to extend his streak of seasons with at least one win to nine.

“Early on in my career I was just thinking it was all about me, me, me making the difference, and all along it’s everybody that adds to this,” Busch said. “At the end of the day, however many years it’s been and however many wins it’s been, it’s the same thing that I’ll always be able to go to my dad, give him a hug or a team owner in [Las] Vegas, the Star Nursery guy, and just say thank you for helping me make it in this NASCAR world.

“Now here we are with winning with Toyota and 23XI, and this is my family.”

There was more emotional weight to Busch’s victory, specifically connected to the timing.

Busch’s win came in the No. 45. That number is associated with team owner Michael Jordan’s basketball career, but it has a tragic connection to NASCAR history.

While many drivers have raced the number in the Cup Series in the 21st century, the No. 45 is most linked to the Petty family, specifically Adam Petty.

Busch’s win came three days after the 22nd anniversary of Petty’s death in a crash during a Busch Series practice session at New Hampshire Motor Speedway.

His father, Kyle Petty, took up the number in the immediate aftermath of the accident. But it was last raced in Cup in 2008.

“M.J. wanted this number on the second car, and we asked the Petty family for their blessing,” Busch said. “Kyle Petty said, ‘Yep, if it’s you, Kurt, I’m going to let it ride.’

“Yes, I could feel things early on with Kyle and the way that he wanted this No. 45 car to have success, and it’s a small spiritual connection. Again, I’m happy that we’ve won, and also it’s a representation of a brand, and it’s a 45. With us winning, or even just continuing to build and build and build, we wanted the No. 45 to be successful. I’ll now be able to call Kyle.

“I’ll find him in Level Cross, (North Carolina) and we’ll go get a drink together and say thanks.”