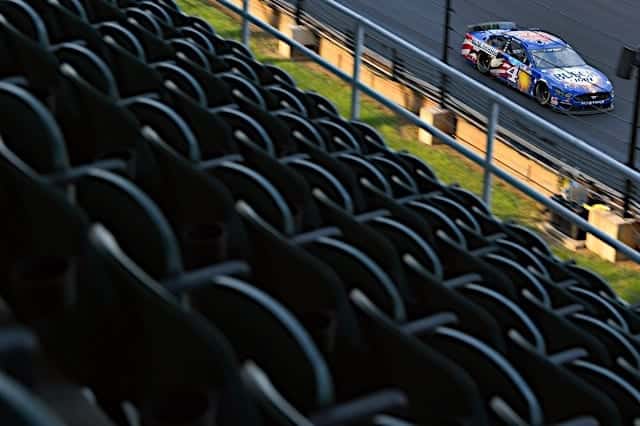 Did You Notice? … There are a dozen NASCAR tracks left on the Cup Series schedule with two race dates?

Kansas Speedway remains one of them. The track hosted a highly competitive event on Sunday (May 15), but its biggest drag was below-average attendance in a year NASCAR popularity has been increasing.

I'm not sure if people looked at the weather and didn't expect us to start on time or what but there are a lot of empty seats. #NASCAR pic.twitter.com/aZ5Pz1IE26

The race itself also wound up with lower television ratings, down nearly half-a-million viewers from last season in one of the year’s few disappointments. It’s also not the first time Kansas has come up in terms of lagging popularity either.

In NASCAR President Steve Phelps’ State of the Sport press conference last November, he specifically referenced Kansas along with Texas Motor Speedway, where the All-Star Race is being held this weekend, as tracks that need improvement.

— Texas: "We can all agree Texas wasn't our best foot forward for the year." Adds Texas had "unacceptable level of tickets sold in that marketplace."

That tweet by Jeff Gluck sums it up nicely. At the end of last season, when most tracks were up versus 2019 attendance, Texas and Kansas struggled … and their reward was still having two dates on the Cup schedule.

Taking a closer look at which tracks still have two dates, I’d split them into four categories. Some are more easily explainable than others.

Daytona International Speedway is the home of NASCAR’s Super Bowl, the Daytona 500. Darlington Raceway is the track that produced the first 500-mile superspeedway race on asphalt, the Southern 500. Talladega Superspeedway is the largest track on the schedule and used to host the sport’s fastest 500-miler, part of the old Winston Million bonus as a crown jewel event. And Martinsville Speedway is the lone remaining track from the original NASCAR Cup schedule in 1949.

All of these tracks continue to make memories, link up to past traditions and provide some of the most exciting finishes each season. It makes sense to have two dates at these facilities unless they’re playing to about 80-90 percent empty seats.

Charlotte, Bristol: Diversity. You could make an argument to put both of these tracks in the “tradition” category. Charlotte Motor Speedway hosts the Coca-Cola 600, the longest race of the year that’s also considered one of the sport’s crown jewels. Same for the Bristol Motor Speedway Night Race, arguably the sport’s best short track event that at its height attracted over 160,000 fans to the speedway.

But Charlotte’s competitive fortunes declined as aerodynamics gradually took over 1.5-mile ovals. After a series of yawn-inducing 600s, they decided to utilize their second date for the infield road course, a change that sparked excitement among the locals and essentially produces two different races. Bristol did the same after spring race attendance started to lag, reconfiguring their facility to produce the first NASCAR Cup dirt track race since 1970.

I’d argue the Bristol event has run to more mixed reviews than the Charlotte ROVAL. But both tracks deserve credit: once ticket sales went down, they reacted and resolved to do something different.

Phoenix: It’s the finale. Yes, yes, I know; Homestead-Miami Speedway served as the NASCAR season finale for nearly 20 years and never had a second date. I can see an argument for Phoenix Raceway though for two reasons …

1) NASCAR’s modern testing rules. With no full testing dates for all teams in-season, plus only 15 minutes of practice time on race weekend, it makes sense to have a regular season event in the spring. Especially in years like this one, when you introduce a new chassis, it’s to NASCAR’s benefit to give teams as much knowledge as possible to make their Championship 4 event a competitive success.

2) Phoenix sells out. Not just for the championship finale; that should be a NASCAR expectation. Instead, the spring race sold out this year. During COVID-19 restrictions in 2021? That one, too. It appears to be the one track where NASCAR has rewarded those strong attendance numbers accordingly while tweaking the schedule.

All of these facilities have had wild swings in the competitive racing at their tracks. All of them have also faced attendance issues that were noticeable enough to be tracked. (Proof: Atlanta. Kansas (see above). Las Vegas. Richmond. Texas.)

Of course, those answers beg the question: why two race dates? I think the answer comes in two forms. One: the major markets these tracks are in. Texas and Atlanta are right in the heart of top-10 media markets (Nos. 5 and 7, respectively). Kansas City is much smaller (No. 34) but also the only major track in the heart of the Midwest without Chicagoland Speedway back on the schedule.

Las Vegas (No. 40) is one of the hottest markets for sports right now, recently acquiring both an NHL and NFL team. It remains one of the top tourist destinations in America when NASCAR tracks equate to a destination trip for many fans.

Richmond may be a mix of different factors. It’s within reasonable distance of the Washington, D.C. market (No. 9) but it’s also one of just three short tracks on the NASCAR schedule. It’s a track type fans have clamored for, leading to more patience from officials that the racing will improve, as many suitable alternatives don’t have the seats, the safety or the state-of-the-art facilities after a recent $30 million renovation.

Two of those racetracks are owned by NASCAR’s former track arm, what was International Speedway Corporation (ISC merged into the larger organization in 2019). The other three are owned by Speedway Motorsports, who control about a dozen race dates overall.

One of SMI’s tracks, Texas, will serve as the home of the All-Star Race a second straight year. If both attendance and the racing is still dismal, consideration should be given to moving that race around. It’s a win-win for both sides: one-date tracks would be guaranteed a second race every few years while NASCAR seeks a permanent replacement for a race that’s often failed to reach expectations over the past decade-plus.

Those tracks wouldn’t need to be limited to SMI-specific ones, either. The Circuit of the Americas race, as an example, came about when SMI President Marcus Smith entered into an agreement to lease the track for the weekend, giving up their second points-paying Cup date at Texas to do it.

That leaves an even split of four second dates for the taking and a lot of different options. Both NASCAR and SMI have other racetracks that could be revived by a future Cup date. Chicagoland Speedway and Iowa Speedway come to mind for NASCAR, tracks that would provide other options inside the Midwest.

For SMI? You have Kentucky Speedway, whose future (like Chicagoland) could potentially be revived through the Next Gen’s success on intermediates. And then there’s North Wilkesboro Speedway, currently being renovated for racing to return in 2022, although Smith has made clear the new infrastructure won’t support Cup events.

It’s not easy to revive a dormant racetrack for just one race weekend per year. So perhaps these two track-owning behemoths could investigate options like a street race in Chicago or a rotating stadium event like the Los Angeles Memorial Coliseum Clash exhibition. Both have already been inching in that direction, opening up the schedule and allowing for greater flexibility, including the influx of COTA and Road America, among other changes.

But Kansas’ attendance woes are proof that NASCAR can go farther. Just because you reward a track with two race dates doesn’t mean fans are going to automatically go. At the very least, if tracks with sagging attendance still get rewarded, there needs to be an in-depth marketing push and investigation as to why they can’t get butts in seats.

Your inclination was correct, Bristol and Charlotte should be considered tradition tracks. And I will buy into your Phoenix justification, but what if they move the final race to a different track, will that track get a second date and Phoenix lose one? That would only make sense.
As for all the other tracks on the list, the question shouldn’t be, “Should these tracks have two races?” but rather, “Would we have better ratings and attendance if we went to a track that isn’t currently on the schedule?”

My opinion only, the tracks that have two should keep them. The sport is not that solid because who are the new sponsors? Crickets.
Charlotte, Daytona, Martinsville, Darlington, Talladega, Atlanta are legacy tracks. No changes.
Now, in my opinion, Texas should have one date in even years and Kansas should have the date in the odd years. Move the All Star race to the opposite. Kansas was Lesa Kennedy’s doings and we are lucky the didn’t put the Hall of Fame there.
Kind of like having a Navy base in Oklahoma.

Kevin in SoCal
Reply to  Charlie

I thought Kansas having two dates was because then-sponsor Nextel/Sprint had their home base in Kansas.
I don’t know why they still have two dates.
I definitely agree with moving dates around. Every track should get one date at least. We can alternate years so more tracks get two dates, as mentioned.

Two weeks ago when Dover was postponed to Monday, we saw the quotes from Phelps that NASCAR was willing to sacrifice a couple of races running as scheduled for the sake of TV. Now quotes from the same Mr. Phelps surface about tracks with lackluster attendance. Is attendance important or not?

Attendence was important for North Wilksboro and Rockingham.

Every time I read articles like this I wonder how Nascar even grew as a sport. All I ever read is how everything about the sport needs to change. And don’t we all know that Nascar has done all it can to change the sport. The sport grew with tracks having two races and it wasn’t a problem. You know why it wasn’t a problem because the racing was excellent. Imagine that a sport built on racing cars had excellent racing. Why has that concept been lost for the last 25 years. A person doesn’t repaint a restaurant when the food is bad, make the food good and people will show up. And talk about the good food. Nascar needs to focus on racing, give people good racing at a decent start time. I know what a radical concept I am putting forth.

The sanctioning body should seriously consider further changes to next year’s schedule if certain tracks continue to underperform. My recommendations are as follows:

Did Dover become such a yawner that it was a no-brainer to give Nashville their other race dates?