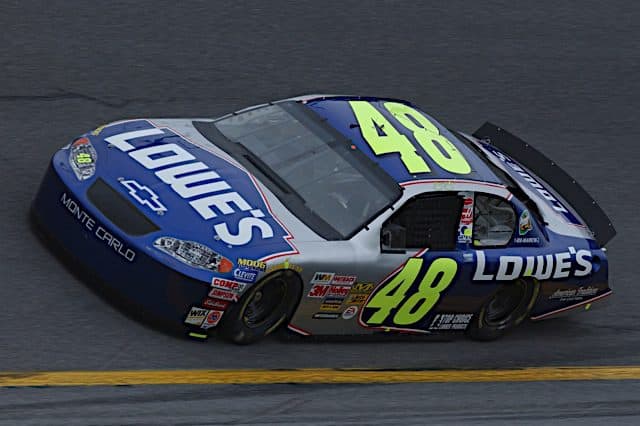 It was where the end of an era met the beginning of a different one.

2003 marked the end of Winston’s run as the tile sponsor of the NASCAR Cup Series. Matt Kenseth won the final Winston Cup title, over 30 years after Richard Petty won the first title under the Winston banner.

At the same time, the driver whose explosive win record would become synonymous with NASCAR’s top division for the next decade was in his sophomore season, not yet a champion, but learning to race like one.

On one May night, the two came together. NASCAR’s All-Star race had carried the title sponsor’s name since its inception in 1985, and named simply “The Winston,” it had the sport’s elite on its win list. That night, it would add another, though Jimmie Johnson’s legend had only begun to be written.

The race has had multiple formats over the years, but the affair was simpler then. The Winston Open was the last-chance race, but instead of three drivers transferring to the main event, it was a winner-take-all scenario. There was no fan vote to stump for.

See also
Did You Notice?: A Dozen NASCAR Tracks Still Have 2 Cup Dates. Should They?

The Open was just 30 laps, divided into two segments. After the first 20 laps, anyone from 15th on back was eliminated. The final 10 laps were for a chance at the big prize.

The cars that got eliminated were probably the ones expected to. Mostly running for small and underfunded teams, they didn’t have the money or speed to compete, even in a field without the season’s previous winners. Perhaps the most notable among them was newly-elected Hall of Fame crew chief Kirk Shelmerdine, who ran a couple of years as a driver in a self-owned car. His only race in 2003 was the Daytona 500, for which he’d failed to qualify.

Jeff Burton came away with the win and the lone transfer spot, beating Dave Blaney to the checkers by .799 seconds. Burton’s son Harrison will race in this weekend’s Open. Blaney’s son Ryan is in the All-Star Race.

The main event was a 90-lap affair, and that year it, too, featured eliminations after the first two segments, with 20 of the 24 entries continuing after the first 40 laps and the field whittled to 14 after another 30 circuits.

The winner would be named after a final 20-lap sprint.

Tony Stewart was leading at the end of the first segment. Johnson had started 16th and raced to 11th, but his pit crew gained him track position on the round of mandatory green-flag stops, sending him out in third spot after stops were completed. Johnson dispatched Kevin Harvick to run second at the caution for the end of the segment.

Hall of Famer Rusty Wallace was among the drivers eliminated; the others were Jamie McMurray, Elliott Sadler and Johnny Benson. Ricky Rudd sealed Wallace’s fate with a daring pass on the outside on the final lap of the segment.

Five laps into the second segment, Jeff Gordon got loose racing Sterling Marlin and slid into Marlin’s No. 40, sending Marlin spinning. Burton somehow managed to avoid Marlin from the position behind the No. 40, only to have another scare a few laps later after contact from his brother Ward.

Ward Burton smacked the wall just seconds later after contact from Gordon, ending Burton’s race. Race leader Stewart pitted under the caution along with Johnson, Newman and a few others. It put them in traffic and fighting to make it back into the top 14. That handed the lead to Harvick, who waged a terrific battle with Kurt Busch for that spot as the laps in the segment wound down.

See also
Dropping the Hammer: The World According to 23XI Racing

Meanwhile, the fight for the transfer spots was hot. Ricky Craven, Mark Martin and Newman entered turn 3 three-wide with Stewart right behind but didn’t exit that way. Newman, on the bottom, took the lumps with a hard crash that sent him to the garage to join Ward Burton. Newman had won the All-Star race the previous year as a rookie.

Newman climbed out of his car and looked ready to confront the others, but the race was red-flagged and the cars stopped before they reached him. Newman looked a little deflated after being denied the chance to toss his head restraint at someone. Replays showed that Newman hadn’t had contact with another car, which Newman acknowledged after seeing the footage.

That wasn’t the biggest incident in that segment, however. Kurt Busch won the segment as chaos broke out behind him. In a crash more reminiscent of Daytona or Talladega, Stewart tagged Terry Labonte and both spun across the track, collecting Mark Martin, Bill Elliott, Dale Earnhardt Jr. and Dale Jarrett.

The crash made the impending elimination a moot point, with only 12 cars able to start the final 20-lap portion of the race.

The final segment started with the top 10 cars being inverted (the number was determined by a fan vote and to nobody’s surprise, they picked the maximum number). That put Marlin and Gordon on the front row ahead of Craven and Johnson for the restart.

NASCAR waved off the initial restart because both Harvick and Busch jumped the start. Things got hot fast, with three-wide racing for second before the first lap was over. Gordon, whose car had struggled early, jumped to the lead after taking advantage of the inversion.

Johnson got by Gordon with 15 to go as positions changed hands throughout the field behind them. Up front, Johnson was challenged by Michael Waltrip, Craven and Joe Nemechek as Gordon fought to hold them all off. Busch charged from 10th to join the fray.

Johnson loved the hard racing behind him as it allowed him to open a big lead (clean air was a thing then too). Waltrip dogged Johnson but couldn’t close enough to challenge for the lead. Kenseth mounted an offensive but didn’t have time to crack the top five.

With five to go, Busch had passed all but one of the cars that he’s lost positions to in the inversion. Bobby Labonte had the fastest car, surging to third, but not enough laps to take advantage.

In the end, it was Johnson who took the checkers for the first of four All-Star race wins in his career, which is a NASCAR record.

Some other things to consider: 2003 The Winston:

2003 marked the last time the race would carry the Winston name. Had it not been for tobacco giant R.J. Reynolds, NASCAR may well have remained a regionally popular sport. There might have been no All-Star events, no Hall of Fame. The company’s title sponsorship helped take the sport into the national spotlight.

2003 was the last year the series was known as Winston Cup. Under that banner, two seven-time champions were crowned. Not all of Petty’s titles were in the Winston era, but his final ones were. All of Dale Earnhardt’s titles fell in the Winston years, too. As that time came to an end, it was certainly easy to believe that number would never be matched.

At the time of The Winston in 2003, Jimmie Johnson had three Cup wins, enough to earn him a spot, enough to show he had the talent to race in the Cup Series. He won his first title in 2006, when the series was under a new title sponsor. And he won his seventh in 2016.

Their paths only crossed for two seasons, culminating in that All-Star event in May of the sponsor’s final season.

The Winston Era was over. The Johnson Era was just getting started. They came together under the lights at Charlotte for one memorable dance.

And all these years later Jimmie is being tutored for the Indy 500 by Danica !