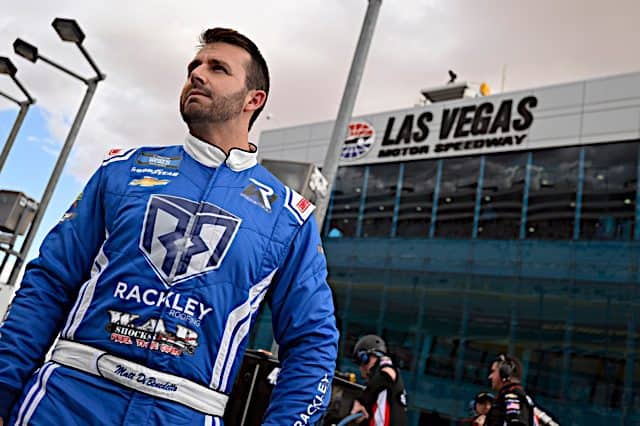 At the end of the 2021 season, Matt DiBenedetto was released from his NASCAR Cup Series ride when Wood Brothers Racing opted to put Harrison Burton behind the wheel of the No. 21 Ford.

With nothing on the Cup side of things, DiBenedetto joined with an opportunity to help the organization improve its equipment and become more competitive within the series.

He opened the year with back-to-back top 10s and it looked like he’d made the smart decision to drop back to the Camping World Truck Series and race competitively week after week.

But that’s when things turned south a little for the No. 25 team. Over the four races that followed, DiBenedetto finished 30th or worse in three of them.

“It is [disappointing]. It’s not easy, it’s frustrating,” he told Frontstretch. “There’s really no way around it; it’s just frustrating. Sometimes there’s a balance where I think it’s OK, we could be worse. When you only have bad things happening, it sucks.

“I’m more of an embrace the frustrations of it and keep the balance and perspective and just think of it through the big picture lens. But it doesn’t make it not frustrating.”

An 11th-place run at Darlington Raceway turned into a top 10 for a few days when Matt Crafton suffered a disqualification that was ultimately appealed and reversed. But instead of being disappointed in losing a top-10 finish, DiBenedetto opted to look at the positives.

“I think we were lucky to even get back on the lead lap. It was a mess of a race,” he said of the 11th-place run. “We were two laps down and pitted under green twice for flat tires and just battled the enemy big time.

“We have speed, obviously. We just need some smooth execution from start to finish of the race.”

Fast forward to Kansas Speedway and it was one of those races… almost.

An issue with the brakes during practice required a change prior to the race, and he was forced to drop to the rear of the field at the start. But by the time the checkered flag waved, DiBenedetto walked away with a seventh-place finish, his third top 10 of the season.

When John Hunter Nemechek opted to drop back to the Truck Series after spending some time in the Cup Series in an effort to race for wins and a championship, everyone saw the success he had. And suddenly, it was a viable option for a driver who didn’t have an Xfinity or Cup series ride to keep their career moving.

As you would expect, DiBenedetto entered the series with his own set of expectations. But how have those expectations measured up to this point in the season?

“I think speed and potential in our trucks and our team is, if anything, better than expected. They have great speed, they have nice trucks, we have good people. That stuff, as far as expectations, is excellent.

“But on the flip side, just as far as circumstances and trying to have some smooth execution, not having little things biting us, little failures we’ve had. At COTA, we broke multiple times, here we had the brake thing. It’s the little things we gotta clean up.

Obviously, any driver transitioning to a different series is going to have some growing pains as they familiarize themselves with their team as well as the change in vehicle. But in DiBenedetto’s case, having run Cup previously has actually worked out in his favor.

He compared the trucks to the 550 horsepower package Cup ran last season.

“Without that it would have been very different,” he explained.

“We have a relationship with the GMS folks and I’m comfortable talking with Grant Enfinger and he’s been doing this a while,” he continued when asked about who he’s turned to to help with his transition. “I’ve known Ben Rhodes for a long, long time. It’s crazy to think he’s so young and he’s been doing this for a way longer time than I realized, so I’ve asked him questions and such.

“You’ve got to be a student of the game in anything that you jump into. That’s been my approach to this season. I’d say the biggest difference is understanding the people I’m racing and minimizing mistakes.”

Many may scoff and say DiBenedetto put himself in a position to have the Truck Series be the only option for him. And while that could be true, it’s turned out to be a great decision for him.

“I like this a lot. Love the schedule, love the races. I like the race distance better,” he said with a big smile on his face. “It feels like everyone’s on qualifying mode from the drop of the green, so I think it’s fun. It almost reminds me a little more of my dirt racing days where it’s you drop the green and you’re hammer down. Not that you aren’t in Cup; every position matters.

“It just feels like the races are short enough, they drop the green and you’re on kill mode from the start. I enjoy that aspect, I enjoy the schedule, I enjoy the atmosphere, our team, all of that stuff. Aside from the circumstances and the frustrations on that front that I know we can clean up and start having lots of excellent runs, I’m having more fun that I ever have for sure.”

But given the choice, he “wouldn’t change [his] path and how it got [him] here.

“These guys (Crafton, Johnny Sauter, Todd Bodine, Ron Hornaday) might have had the right idea figured out because this is fun,” DiBenedetto explained as he described the level of fun he’s having. “Not that Cup isn’t fun. It’s just so much more stressful and the atmosphere is very different. It’s way more serious and way more corporate.

“This is more almost like racing a late model race or something and a bunch of racers. Much more old school. It feels like I stepped back 20 years. But I’m an old soul anyway, and I love racing and the roots of it.

“I’m thankful that at my age and because of my faith and perspective, I have a great appreciation for it instead of looking at it like I deserve to be in Cup. I’m pretty thankful to do this and have a great schedule and have a lot of fun. It rejuvenates the fun of racing.”

And that rejuvenation of the fun and passion for racing is something the 29-year-old needed after late last season. Unless you weren’t following NASCAR then, you’re well aware of the social media posts and the attention they garnered, and the response certainly wasn’t all positive. Despite that, it’s still something DiBenedetto has used as a lesson.

“I like to pick on myself or use myself as an example,” he explained. “I’m OK with self awareness and reflecting because if my crash course of a journey can help anybody, I have no pride or no ego.”

Instead, he and his wife spent the offseason really focusing on each other and their faith.

“My faith and my relationship besides having a relationship with the Lord since I became a born again Christian my life changed in an instant big time. It really saved my life,” DiBenedetto said as he suddenly turned serious. “When I went through that (social media outcry), it’s funny because how everything happens for a reason? Some of it isn’t fun. Some things are like ‘goodness, I know your ways are above my ways’ but some of that wasn’t fun.

“After all that stuff, it was like God the father is also the disciplinary father and I felt like I was getting off track and allowing the frustrations of this world to consume me like a lot of the world is right now. The world’s in a lot of chaos and I was allowing it to just frustrate me and then I realized, it was as if God came and smacked me in the head and was like ‘hey you’re supposed to be focused on me, dummy.’ You’re not supposed to get caught up in worldly things.”

Growing his relationship with God along with his wife “was the biggest blessing that ever happened at the time because it changed my perspective.

“All that stuff happened for a reason as much as it was like I look back at myself then and now I view all the political stuff very differently. I view it through a spiritual lens and I think it’s all a distraction from the only thing that matters. That’s just my personal belief.

“But it happened for a reason because it led me to where I’m driving for this team and I’m having more fun than I ever have. I’ve grown a lot, I’ve been disciplined a lot, I’ve been humbled a lot. My views and perspective have been changed a lot to where I’ve been filled with an immense amount of love for everybody and truly humbled before God to view. It really changed my perspective on life and it’s given me a peace beyond what I ever knew was fathomable.

When my wife and I were born again at age 32, it was for real and our lives turned on a dime, like 180 degrees. We gave our lives to the Lord and our journey began. Hope this is Matt’s and his wife’s experience. You will grow and make mistakes as you mature but there’s no turning back if it’s the real deal. Wishing you the best!

Happy that Matt’s personal life is great. As for the current state of his racing career….. eh. He’s doing fine for not having the best equipment. But if he doesn’t win a race or make the Playoffs this year, it’ll continue to stain his racing career further than missing the Cup Playoffs in a Penske car did in 2021. Hopefully he can put some consistent runs together and make the Playoffs, but as it is right now, he’s over a race out with no superspeedways left in the regular season, which would likely be his best shot to win and get in.