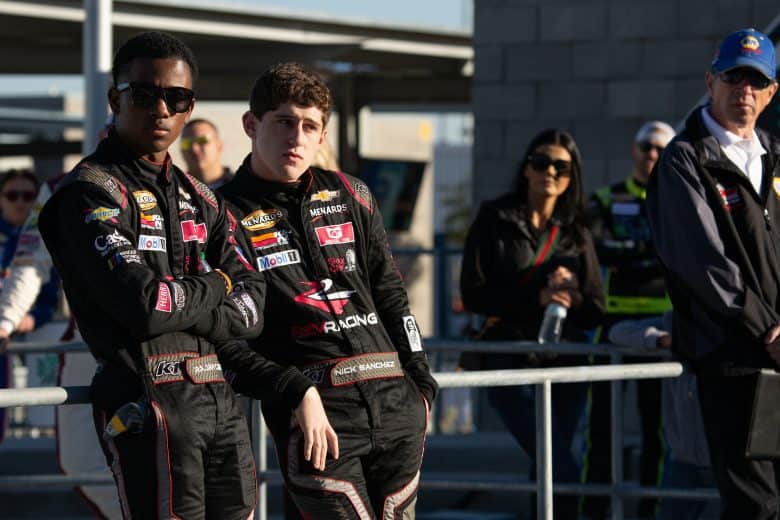 Fear not though, his two straight wins, and three ARCA wins overall, have not inflated Sanchez’s ego.

“Every race is a new race,” he told Frontstretch. “I try to keep my head down and learn what I can and then go with my gut.”

While battling for the ARCA title, Sanchez and Caruth still have a good relationship, which they both attest to a team mindset.

“We communicate pretty well I’d say,” Sanchez said. “We are close team-wise. Once we get on track, it is a battle, but we are teammates.”

“I agree with Nick,” Caruth said. “Honestly, we both understand when we put our helmets on, we race for ourselves. But other than that, we are a race team. We do what we can to help each other and at the same time we are very competitive.”

After finishing 0.775 seconds behind his teammate, would Caruth have driven aggressively, as showcased in the NASCAR national series, to move his teammate for the win?

“It’s situational,” Caruth said. “Obviously, if it is a late-race scenario, all bets are off. But we are not going to wreck each other; Nick is my teammate. That would just be foolish but there are aggression levels that need to be had. While we are a team, we race for ourselves but there are give and take situations in the longer races.”

In addition to serving as Rev’s competition director, Matt Bucher also is Sanchez’s crew chief this season. An employee with Rev for almost nine years, Bucher has been a crew chief before, calling the shots for Chase Cabre, Jay Beasley, current NASCAR Xfinity Series driver Ryan Vargas, and now Sanchez.

While Bucher understands hard racing means aggressive driving, he does not want his drivers to wind up with wrecked racecars from racing against each other.

“What we have put together as a program, when we go to the track, one of our cars should finish first and the other should finish second,” Bucher continued. “As a team, we are prepared to give these kids everything we can for them to show what they’ve got.”

Bucher has known Sanchez for a few years as Sanchez has ascended the ranks of the Rev development program. Now armed with Chevrolet support, Bucher attests the team’s success this year to the whole team.

“I have a good support staff out in the shop here,” Bucher said. “They get everything done in the shop. When I am running around paying bills, trying to figure out how to make our cars better, everybody in the shop pitches in, does their deal on everything. It is nice to have someone out there to lean on, to know the race cars are put together properly, and we are going to go to the racetrack and be competitive. That all-in team mindset we have is how I am able to do my job as competition director and then go with Nick and call the races.”

Looking forward to the next several races with @TeamBJMcLeod . Charlotte up next! pic.twitter.com/fXIa5MLhIi

While Sanchez ran 18 of the 20 ARCA races last season, Caruth only competed in five. His inexperience has not hindered his performance though. He has three top fives and seven top 10s in only nine ARCA starts so far. Caruth has relied on his Rev colleagues as he competes at many of the tracks on the ARCA circuit for the first time.

“It comes down to the people at the shop, to be honest with you,” he said. “Nick ran those racetracks last year. I ran some. I was fortunate to be at the races and be on the spotter’s stand with Mark [Green]. For the tracks I have never been to, there are plenty of people at the shop who have raced there who give me plenty of stories and information. I go off their baseline and then I learn the rest myself.”

Like Daytona International Speedway and Talladega, Caruth has never competed at the next course on the ARCA schedule before Charlotte Motor Speedway.

2nd at @kansasspeedway. Getting closer, onto Charlotte. Thank you everyone. pic.twitter.com/PJJ2eetKjP

Despite his inexperience, Caruth exudes confidence.

“Entering race day, I know I am prepared, I have worked hard, I have done everything I can to be ready for that moment,” the 20-year-old said. “I am ready, the team’s ready as they have busted their butts to get the car to the racetrack. So, I do not really have any nerves in that aspect. I try to stay as focused as I can, understanding there are some things out of my control, but knowing I have control of making moves in the car.”

To hasten Caruth’s learning curve, Brad Parrott joined Rev as Caruth’s crew chief. Parrott constantly gives Caruth feedback throughout an ARCA race weekend, but he knows his driver has the talent to succeed.

“He is young and talented,” Parrott said. “He does not have as much experience as the drivers I have worked with before, so I have to be easy and tell him to give it 120%, being this might be his first time at a racetrack. Overall, giving him confidence that he can get the job done and giving him a car that he can get the job done in. Then we are leaning on our teammates as much as possible.”

While Parrott will not compare Caruth to any driver he’s worked with before, Parrott sees some qualities in Caruth reminiscent of the great Dale Earnhardt Sr.

“Cause he can get the job done,” Parrott explained. “He is young and he has an intimidation style in his blood.”

“I’m flattered,” Caruth deadpanned. “To be honest, that means a lot. I do not know if I intimidate, I just try to keep my head down and do the best I can at the racetrack. Not many people get this opportunity; I know I have to take advantage of it.”