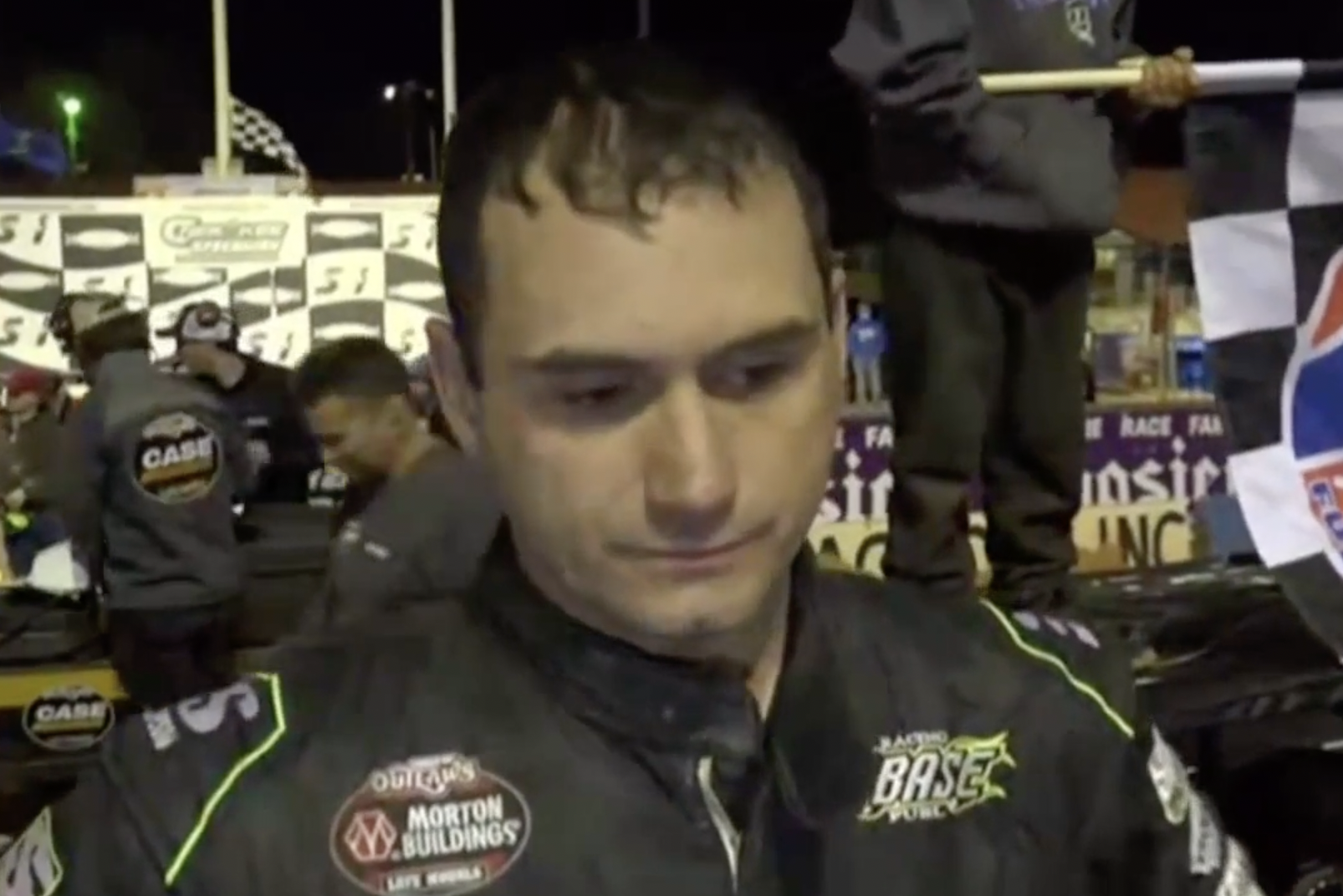 Rookie of the Year leader and current WoO points runner-up Max Blair has had the Pennsylvania swing of the WoO late model schedule circled all season long. He kicked that swing off in spectacular fashion, leading all 40 laps of Thursday’s feature at Bloomsburg to comfortably score his second tour win of the 2022 season.

The @viper_martin driver takes his second @WoOLateModels win of the year, shaving some points off Dennis Erb’s lead.

Now a perfect 3 for 3 at the Bloomsburg Fair oval. pic.twitter.com/vKU2tocDNe

The win also extended Blair’s undefeated streak at Bloomsburg; since the track re-opened last season, Blair has won all three late model races run on the track. Blair made up little ground in the WoO points however, with current series leader Dennis Erb Jr. finishing second in the feature.

Seven cautions peppered the feature, which saw track conditions prove choppy all evening after heavy rainfall hit Bloomsburg. Less than half of the 24-car field was left running at the finish.

It’s not really up for debate that the overall quality of the WoO regulars field took a dip after Brandon Sheppard and his Rocket house car team announced a few weeks back that they were dropping the tour to pursue the Lucas Oil Late Model Dirt Series crown. Thursday’s feature, however, saw both Blair and Erb drive clean, proficient races worthy of their current 1-2 standings on a national touring ladder. This points battle could very well prove worth watching.

Four-time WoO series champion Josh Richards is still far from contending for title number five this season, but his No. 1 team does appear to finally be turning the corner. Ending the Dairyland Showdown at Mississippi Thunder with a podium run, Richards overcame quarterpanel damage to finish third at Bloomsburg on Thursday.

That was a wild one 😨 pic.twitter.com/Nu6WgIv6xO

Brent Larson’s sixth-place finish was his first top-10 finish in a month on the WoO tour.

“Reaper” Ryan Gustin and team made a 950-mile haul after scoring the Flo Racing Night in America win in Marshalltown, Iowa, last night to race at Bloomsburg, scoring a track record in qualifying and winning the first heat race of the night. Gustin was running third in the feature Thursday …

Only Gustin came up limp with engine trouble in turn 3 with only five laps to go. All the credit in the world to Gustin and team for making the trip, they deserved better than that ending.

Running 3rd with 4 laps to go—engine expires. DNF. Get it changed and try again tomorrow.

Hyndman, Pa.’s Drake Troutman ended up qualifying his late model with a busted right-rear quarterpanel and no spoiler after pounding the turn 1 wall during hot laps. The 17-year-old didn’t come close to transferring to the A-main.

Jeff Rine’s night started on a hot streak with a heat race win and a pole position from the redraw, but from the drop of the green it was all backwards. Rine didn’t lead a single lap and lasted only seven laps before he slammed the turn 1 wall, causing heavy right-side damage.

Gregg Satterlee had about as bad a showing in a late model race in Pennsylvania as can be remembered, spinning twice during Thursday’s feature, the second of which on lap 22 saw his car all but destroyed after Boom Briggs had no way to avoid his spinning machine.

Josh Spicer and Paul Moyer both could lay claim to being the hard-luck driver in the 305 sprint car support feature Thursday night at Bloomsburg; Spicer flipped his car on the opening lap and suffered heavy damage, while Moyer broke while leading inside of 10 laps to go.

32 super late models showed up for Thursday’s race at Bloomsburg, a very solid car count. One has to wonder if that’ll happen the next time the late models are scheduled to race this track, given just how much sheet metal got torn up running this race.

The Bloomsburg Fair oval had proverbial teeth tonight. Goodness … of the 24 starters, 11 finished.

Special thanks to Guy Smith, TrackChaser extraordinaire for catching this one. Bloomsburg had the 305s in the headline slot for Thursday’s race program on its website earlier this week. I know that Pennsylvania is sprint car country, but that’s still a hell of a Freudian slip with the WoO sanction in town.

I’d have thought that Clarksville Speedway would have come up with this years ago, but credit to Bloomsburg for having a truly unique T-shirt cannon. And eagle-eyed viewers on Thursday’s DirtVision broadcast could see that the vehicle was parked on the backstretch to give its drivers a view of the racing surface come feature time.

Apparently at Bloomsburg Fairgrounds Speedway, they shoot T-Shirts out of a toilet the size of a tank: pic.twitter.com/vAZMMPVt06

I have to question the decision to run the 305 sprint car feature prior to the late models, considering that track work had to be done after the sprint cars ran anyhow and resulted in the WoO feature going green after 10 p.m. on a weeknight.

With the announcement this week that Shane Clanton had dropped off the LOLMDS tour to rejoin the ranks of the Outlaws, Clanton scored a top-five finish. More significantly, he got through an entire racing program without incurring the wrath of another competitor. Of course, maybe that’s because no driver with a No. 7 car started Thursday’s feature.

After a two-year absence from @WoOLateModels, @clanton25 is rejoining the series under Skyline Motorsports’ DIRTcar Platinum Team Membership.@TylerBruening16, meanwhile, has dropped off tour for an independent schedule.

Where it Rated (on a scale of one to six cans with one a stinker and a six-pack an instant classic): We’ll give the debut of the World of Outlaws late models at Bloomsburg three-and-a-half Yuenglings. The race certainly had drama courtesy of Satterlee and Gustin’s woes, but Blair made the proceedings academic up front.

Up Next: As mentioned Monday, Thinkin’ Dirty will be taking the coming weekend off, but will return for the Show-Me 100 over Memorial Day Weekend.