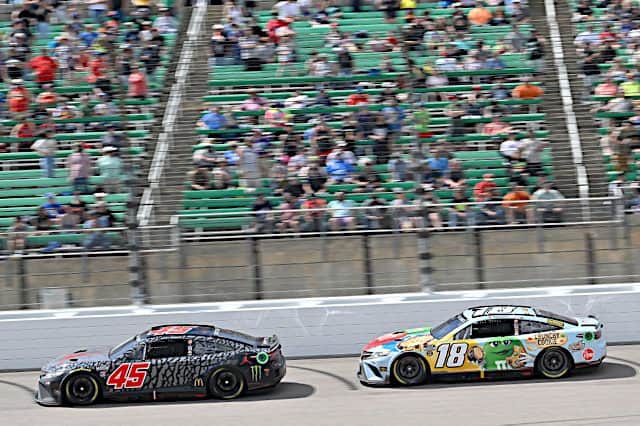 Kurt Busch‘s Kansas Speedway win in the NASCAR Cup Series wasn’t just a milestone for 23XI Racing, whose No. 45 team garnered its first win and second total for the sophomore organization.

It was also Busch’s 34th Cup win, a mark that moves him into sole possession of 25th all time, after previously sharing the ranking with Fireball Roberts, both at 33 victories apiece.

A 34th win, while substantial, isn’t necessarily a milestone moment for the Cup Series on paper — that is, until you combine it with Kyle Busch‘s 60 career wins in the series.

Entering the All-Star break, the Busch brothers now have 94 Cup wins between them, a mark that ties the pair with Bobby and Donnie Allison for the most between siblings in Cup history.

NASCAR’s long been a family affair, with siblings and later children (and grandchildren, and so on) of drivers trying their hand at stock car racing. But of all the blood relations to take to the track over NASCAR’s 70-plus-year history, Kyle and Kurt Busch are paralleled only by Bobby and Donnie Allison in terms of combined victory lane appearances. With one more win, would that make them the best ever?

Well, yes. But also … no? In the sense that they were already NASCAR’s greatest siblings, certainly in the modern era — pair, trio or otherwise.

It all comes down to the weakest link, really. In this case, it’s Kurt — which feels weird to write, since he’s a 34-time Cup winner and former series champion. Nonetheless, he’s still 26 wins behind Kyle’s mark, the latter doing so in less time, as Kurt entered Cup in 2000 and full time in 2001, while Kyle followed with a 2004 debut and a rookie season in 2005.

But 34 wins still put Kurt Busch much higher than Donnie Allison, who contributed just 10 of the 94 Allison brothers wins between 1968 and 1978. That isn’t to say Donnie wasn’t a good driver — of course he was; 10 wins in NASCAR’s premier division is nothing to sneeze at, and he did so while never running a full schedule. But all told, his stats still pale in comparison to Kurt’s, especially on a longevity front, as the latter has now been winning Cup races for two decades.

And to boot, the Busch brothers’ overall championship count trumps the Allisons’, too. Between them, Kyle and Kurt boast three titles, two for the former and one for the latter. Bobby Allison, meanwhile, managed just one, his 1983 triumph.

The only other siblings that come anywhere near either pair are the Waltrips, Darrell and Michael. But despite 88 wins between them, the disparity between the two is even more striking than that of the Allisons; Darrell accounts for 84 of the victories, Michael just four.

Next up: the Flock trio of Tim, Fonty and Bob. Again, not much to dissect here; 62 wins between them, and over a much shorter period of time than the Busch brothers, granted. But Tim accounted for most of the success at 39 wins and two titles, followed by Fonty at 19 victories and Bob with four nods. Even if one makes the argument that the Flocks were from a deeply different era of NASCAR racing and it’s therefore difficult to compare — and it is to a point, I get it — the sum of all parts still feels more formidable on the Busch side thanks to their longevity. We’re talking overall greats here, and points have to be given to Kurt and Kyle for not only being a presence in the series for two decades but also winning races all throughout.

Still, comparing pre-modern-era NASCAR to modern-era NASCAR can be a fool’s errand. So perhaps it’s better to instead look at the Busch brothers as, at minimum, NASCAR’s top siblings in the latter era. And the only others that haven’t yet been mentioned are Terry and Bobby Labonte.

The Labontes have a claim to the throne, sure. Like the Busch brothers, they have three Cup titles to their names, two for Terry and one for Bobby. The careers of both also fit squarely within the modern era, with Terry debuting in 1978 and Bobby following in 1991.

Wins, though — it’s all about the wins here. Neither Terry nor Bobby were slouches compared to the other here, but neither of their eventual win counts — 22 for Terry, 21 for Bobby — even came close to Kurt Busch, let alone Kyle. And that’s with hefty careers for both, as they were full-time Cuppers for two or more decades. They certainly won, and they were often so good during a full season that they’ve gone down in history as Cup champions. Both, too, are members of the NASCAR Hall of Fame.

It’s difficult to formulate an argument that sets them ahead of Kurt and Kyle Busch, though. And that’s why, at least in the modern era, the pair of still-active Cup drivers gets the nod. Taking into account pre-1972 statistics, I’d still wager the brothers are the best of the bunch, mostly due to more long-tailed success. But get them, the Flocks and the Allisons in equal equipment at the height of their talent, and who knows what could’ve been.

Regardless, one more win will give the Busch brothers the most victories for siblings in Cup history. And once that occurs, it’ll be time to set their sights on the next mark — most among families.

That’ll be a tough one, for sure. The Pettys, of course, may never be beat, thanks to Richard Petty’s 200 Cup wins alongside Lee Petty’s 54 and Kyle Petty’s eight, for 262 total. The Allisons follow with 113 when factoring in the 19 victories of Bobby’s son Davey, and then comes the Earnhardts, with 102 between Dale Sr. (76) and Dale Jr. (26).

Damn right! And NASCAR should’ve corrected the stat to reflect this 85th win a loooong time ago.

DoninAjax
Reply to  JD in NC

DW would cry if he had fewer wins than Bobby!

I won’t bother getting into the statistics but I am certain the numbers would prove me right. Bobby and Donnie raced in an era where maybe five or six drivers won a race in a season, and many races were won by one more more laps. The competition was nowhere near as tough then as it was and is in the modern era. My vote is for the Busch brothers as the best, with all respect to the Allisons.

Yeah it was a walk in the park beating Cale, Bobby, Donnie, Buddy, Darrell, Benny, Leeroy, Tiny, …. Baby Busch would be laughing as Junior Johnson smiled and let him past. Back then they would actually “race”, not the farce we have now.

Love ya Kurt! Not Kyle! Sorry about personal trouble. Bit probably for the best. Don’t sweat it. Just move on and beat the krap out of Kyle. 💖

Family with most Daytona 500s.

Family with most Southern 500s.