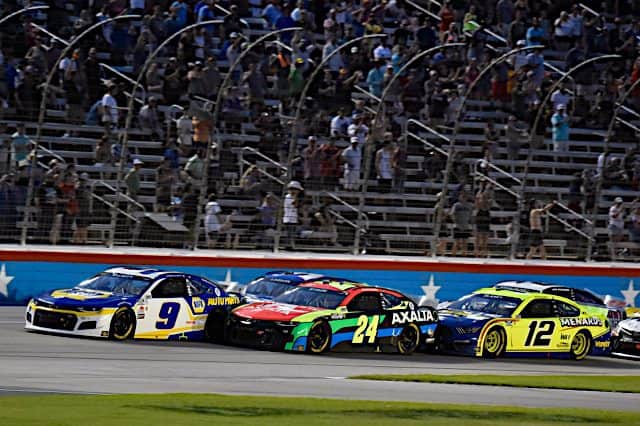 The NASCAR Cup Series’ All-Star Race has evolved considerably over the years, going through more than a dozen format reconfigurations as it nears its fourth decade of existence.

Held at Charlotte Motor Speedway through 2019, it was moved in 2020 due to COVID-19 restrictions in North Carolina to Bristol Motor Speedway, where the cars featured moved-back numbers and glowing manufacturer-specific lights under the rear bumpers. For 2021, the sanctioning body decided to shake things up even further by moving the race of its own volition, choosing to upend Texas Motor Speedway’s spring date and substitute that race out for the exhibition event.

This year, it’s a bit simpler, but with the retooled outline things have changed quite a bit. Automatic bids go to race winners from this season and 2021, including defending champion and reigning All-Star Race winner Kyle Larson. Bubba Wallace, who claimed his first career win last season, makes his first appearance in the main event, while 2022 first-time winners Austin Cindric and Chase Briscoe do the same.

A total of 19 winners between this season and last, plus former All-Star winner Kevin Harvick, mean 20 cars will make the race via automatic berth, while four will transfer from the 16-car All-Star Open. That quartet consists of three segment winners and the fan vote winner.

As for the main event, four stages make up the 125-lap affair, alongside a stage break-esque pit stop contest.

The opener is set to last one-fifth of the race’s duration, with the polesitter determined by qualifying the preceding evening. All three segments have relatively similar rules, but the winner of stage one likely has the hardest job: once his opening-segment triumph is complete, he must finish at least 15th or better in the other two stages to start on the pole in the final stage. This means avoiding any dust-ups that happen throughout the field and staying in contention, barring any disastrous mechanical failures.

Also 25 laps, stage two asks similar requirements of its winner, though with one less stage between them and the finale. Whoever is out front at the close of the second stage, like the stage one winner, must also finish 15th or better in the following 25-lap sprint to retain their front-row starting spot in the final sprint.

Stages two and three are bridged by the special stage break and the pit stop competition, during which the field will be required to come down pit road for four-tire stops. The overall fastest time on pit road means team and driver win the contest and will start fourth in the last stage.

Stage three also lasts 25 laps, bringing the overall length to 75 circuits prior to the 50-lap finale.

Provided all three stage winners managed to meet all the regulations, the stage one, two and three winners will start first, second and third, respectively, with the pit competition winner rolling off fourth. However, this final 50-lap duel has a catch: if no natural caution (i.e. debris, a crash, etc.) between lap 15 and lap 25, NASCAR will throw a competition yellow to reset the field and set up a restart with less than 25 laps remaining.

See also
Only Yesterday: The Day NASCAR's Past &amp; Future Met in The Winston

Winner of the final sprint gets a million bucks and their name alongside others in All-Star Race lore.

For as much criticism as Texas has faced in the past and how lackluster the racing’s been, here’s hoping the Next Gen All-Star Race gives us some hope for the points race there later this year.