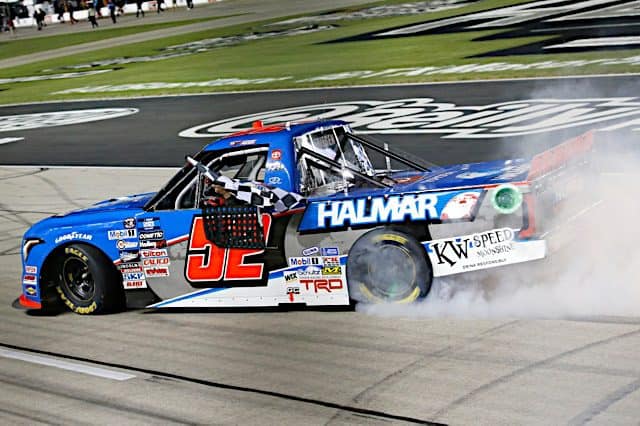 Stewart Friesen donned the cowboy hat and six shooters tonight in the SpeedyCash.com 220 as he took home the win at Texas Motor Speedway. Christian Eckes, Ryan Preece, Carson Hocevar and Ty Majeski rounded out the rest of the top five.

Preece took home the first two stages, but it was Friesen who had the last laugh after a whale of a drive for the win in overtime. This was Friesen’s first race win in the NASCAR Truck Series since 2019 at Phoenix.

Friesen’s win also clinched a much sought-after playoff spot, making him the fifth different winner on the season.

John Hunter Nemechek started stage three with the lead, but after a perplexing decision to pit, decided to trade the lead for tires after a late race caution. He finished sixth after the questionable decision. Crew chief Eric Phillips commented on the move after the stop.

We'll be pondering this perplexing proposition.@JHNemechek gives up the lead for fuel. pic.twitter.com/pE2c2vHuAY

“I expected more to come (down pit road) right there. Track position’s a big deal, you gotta pit under green,” said Phillips.

Friesen, and in turn Halmar Friesen Racing’s victory, broke a 12-race KBM/GMS streak at Texas, as the young team was able to put together a fast ride from the get go with Friesen finishing both of the first stages in second.

Hocevar notched his third top-five finish of the season, as the young fan favorite inches closer and closer to his first win of the year.

Friesen, a long-time dirt racer, stayed true to his roots post-race. Friesen spoke about the final restart on the bottom line in his frontstretch interview.

“When the 17 lined up with me I was like ‘alright, I got Preece. I got a real racer in my back pocket here,’ and he shoved the heck out of me,” Friesen said. “I’m terrible on restarts and that was probably the best one on old tires. (I) just didn’t spin the tires, got a jump and then threw a slider in one and two and it stuck.”

Next up underneath the Friday night NASCAR lights is Charlotte Motor Speedway for the North Carolina Education Lottery 200. The green flag drops at 8:30 p.m. ET, with the race airing on Fox Sports 1 and the Motor Racing Network.