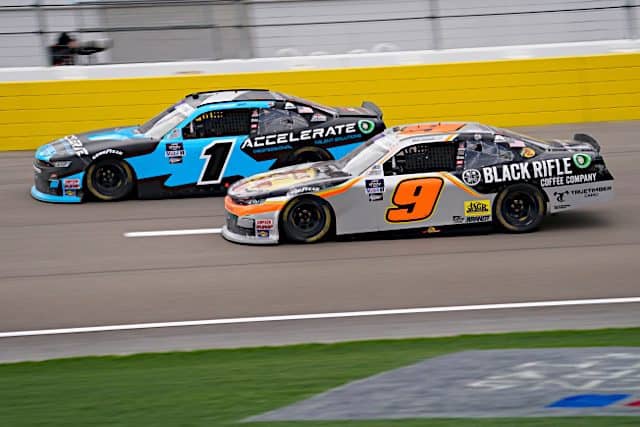 With roughly 100 laps to go in the SRS Distribution 250 at Texas Motor Speedway on Saturday afternoon (May 21), it looked like JR Motorsports was in for a banner day for the organization — but then it all went away.

JRM had won the past three NASCAR Xfinity Series events heading into Texas via wins by Noah Gragson at Talladega Superspeedway, Josh Berry at Dover Motor Speedway and Justin Allgaier at Darlington Raceway. So the organization had the opportunity for a four-peat for the first time in its 18-year history.

Gragson fired off the race with an early lead after winning the pole, and the other four JRM entries —including William Byron in his first start in the part-time No. 88 — quickly joined in on the fun. The opening 118 laps of the race were led by JRM, with all but Sam Mayer taking turns leading laps. It looked like the organization was about to lead every lap of a race for the first time since Kevin Harvick and Chase Elliott combined to lead every lap at Atlanta Motor Speedway in 2014.

Gragson and Allgaier swapped the lead back and forth in stage one, with the No. 9 Chevrolet taking the stage victory. When Gragson and Allgaier pitted during the stage break, Berry inherited the lead and led the next 46 laps, winning stage two and giving him the most laps led on the day. JRM put all five cars inside the top seven in the second stage.

But essentially all in a flash, JRM’s bid for a four-peat and a perfect race all went away. On the next restart, Allgaier pinched Berry down and Berry spun out into oncoming traffic.

Gragson was caught up in the wreck, and though he kept going, a flat tire 10 laps later ended his day.

“I’m fine, just self-inflicted there,” Gragson told FOX Sports 1. “We lost spots on pit road both times down, and you’re in a different position than if you maintained. … I guess the only positive is that we got a playoff point with a stage win, but it definitely sucks.

“It’s great to see all five of the JRM cars, they’re running really strong. … But overall, it’s just a bummer. … We were pretty quick, just biding my time and got caught up in it.”

When the race resumed, Byron wrestled the lead away from Allgaier with the latter making contact with the No. 88. Allgaier had a flat tire shortly after but didn’t hit anything and brought out the caution.

Byron gave up the lead to Austin Hill when he pitted during the caution, and JRM never saw the lead again for the rest of the race. The JRM trio of Byron, Mayer and Allgaier made a late run through the field, working their way up to positions second through fourth. But it was too little, too late, as Tyler Reddick had checked out and cruised to the race win.

Berry finished seventh, and Gragson was credited with 36th, his first finish outside the top 30 all season.

Despite losing out on the win on a day where the cars were so strong, there were still silver linings for JRM. The third place for Mayer tied his career best, and he did so with fill-in crew chief Andrew Overstreet, as regular crew chief Taylor Moyer is out due to suspension for the car losing a tire. It was his third consecutive top five and his fifth in the last six races.

“That’s pretty cool,” Mayer told FS1. “That consistency that we’ve found, and this team working really hard together even though we don’t have Taylor on the box. Still working really hard at the shop and here at the racetrack getting everyone else ready. …

“We were a little bit short. I was really thirsty for it. I was searching around all day for it. We were really fast, I held off the [No.] 7, I think that’s a first for me, so baby steps, I guess.”