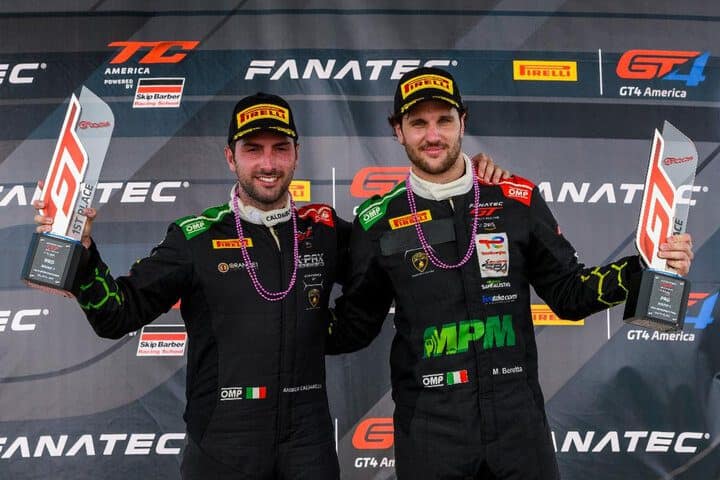 K-PAX Racing’s Andrea Caldarelli and Michele Beretta could not be touched Saturday at NOLA Motorsports Park.  The duo managed to drive away from the pack to win Race No. 1 for Fanatec GT World Challenge America Powered by AWS.  For Caldarelli, it is his third win in a row to start the season.  Beretta claimed his first win on debut with the team.

“It was a great job from everybody,” Beretta told SRO America’s Amanda Busick.  “We did a clean race with no mistakes.  Looking forward to the next one.”

Beretta led from the overall pole while teammate Misha Goikhberg was able to move up to second.  The full course caution (later changed to a safety car) came out at the end of the first lap due to a spin for Wright Motorsports’ Charlie Luck.  Luck went way too fast into turn 3 and charged into the left rear corner of DXDT Racing’s Scott Smithson.  Luck spun out and damaged the front end of his Porsche, while Smithson ended up with a tire rub.

Luck ended up having to go behind the wall for repairs.  Following the replacement of the front splitter, Luck returned to the race, 13 laps down.  He would finish 16th overall, 10th in Pro-Am.

After the restart, Beretta slowly but surely drove away from the rest of the field.  Meanwhile, Turner Motorsport’s Michael Dinan and US RaceTronics’ Steven Aghakhani had a multiple-lap duel for third.  25 minutes into the race, it ended in tears when Aghakhani spun in turn 6.  He was able to continue without issue, but lost a lot of time.

Beretta was able to expand his lead over Goikhberg to over 20 seconds by the time the pit window opened 40 minutes into the race.  The stop cost the No. 1 team part of their lead once Caldarelli got in the car, but the advantage was still very comfortable.  The real race was for third overall between Turner Motorsport’s Robby Foley in the Pro class, Pro-Am leader Bill Auberlen and US RaceTronics’ Loris Spinelli.

Spinelli was able to get past Auberlen and put the pressure on Foley was third.  With 18 minutes to go, side-to-side contact between Foley and Spinelli cut Foley’s left front tire and put him into a gravel trap to bring out the race’s second safety car period.  The contact effectively put Foley and Dinan out of the race.

The caution wiped out a lead of nearly 25 seconds for Caldarelli.  Ultimately, there were only three laps to go when the race restarted.  Having such a lead previously meant that Caldarelli had lapped cars between himself and teammate Jordan Pepper.  As a result, Caldarelli was able to pull away and take the win.

The final margin of victory was 5.474 seconds over Goikhberg and Pepper.  US RaceTronics’ Aghakhani and Spinelli were third.

In Pro-Am, Racers Edge Motorsports’ Ashton Harrison started from the pole in her Acura NSX GT3 Evo22.  Harrison was able to lead early, but could never shake BimmerWorld Racing’s Chandler Hull.  Hull was able to get past for the class lead and fourth overall, but Harrison kept the pressure up.  Crowdstrike Racing’s George Kurtz was another 13 seconds back in third.

The pit stops allowed BimmerWorld Racing to expand their advantage a little bit, making Auberlen a bit more comfortable.  However, the cars started to pack up as they caught lapped traffic.

The caution completely changed the game with lapped traffic playing a big role.  Racers Edge Motorsports’ Mario Farnbacher was right up to Auberlen’s rear bumper, but traffic forced him wide in turn 3 while fighting for the lead.  This allowed Crowdstrike Racing’s Colin Braun to sweep to the inside and pass both Farnbacher and Auberlen to take the lead for himself.  From there, Braun tried to threaten Pepper for second overall and managed to hold off Farnbacher for the win.

Braun and Kurtz ended up third overall at the finish.  They were just a third of a second ahead of Racers Edge Motorsports’ Farnbacher and Harrison.  Auberlen and Hull were third, then the Lamborghini of TR3 Racing’s Giacomo Altoe and Ziad Ghandour.  RealTime Racing’s Michael Cooper and Erin Vogel were fifth in their Acura.

In the Am class, Triarzi Competizione’s Charlie Scardina and Onofrio Triarzi took the victory in their Ferrari 488 GT3 in 12th overall.  They were a full lap ahead of AF Corse’s Conrad Grunewald and Jean-Claude Saada.

Race No. 2 is scheduled to go green at 2:15 p.m. ET Sunday afternoon.  The race will be streamed live at the GT World YouTube channel starting at 2 p.m.  The race will air via tape delay on CBS Sports Network at 6 p.m.