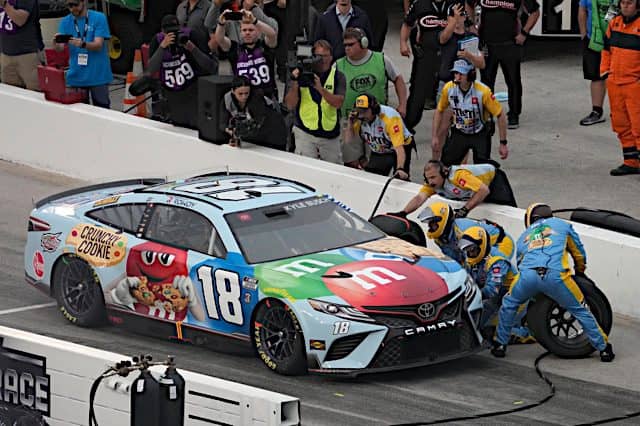 Kyle Busch won the pole for Sunday’s (May 22) All-Star Race. Also, Tyler Reddick is on the pole for the All-Star Open after posting a fast lap of 186.981 mph in qualifying.

Qualifying for the main event featured a knockout-style bracket for the eight quickest drivers from round one. The fastest driver of round one, William Byron, went against Aric Almirola, who was eighth-quickest. It started with a simultaneous pit stop, and who ever got off pit road first likely had the advantage on the track.

Byron, Ryan Blaney, Kyle Larson and Kyle Busch advanced to the next round of the bracket. Then, Blaney overtook Byron while Busch beat Larson after the latter stalled when the lights went green.

In the final round of the bracket, Busch topped Blaney to win the pole for Sunday’s Race. Blaney will join the No. 18 on the front row, while Byron and Larson make up the second row. Kurt Busch and Ross Chastain line up fifth and sixth, and the final drivers to make the top eight were Martin Truex Jr. and Aric Almirola.

Four drivers will be added to the ASR lineup after the Open event: Two stage winners, the race winner and the fan vote winner.

Reddick’s time bested Daniel Suarez by four hundredths of a second to take the top spot in the Open race. Unfortunately, Reddick will have to drop to the rear after the team made some changes to the car. Ricky Stenhouse Jr. slots in third, Erik Jones is fourth and Chris Buescher rounds out the top five.