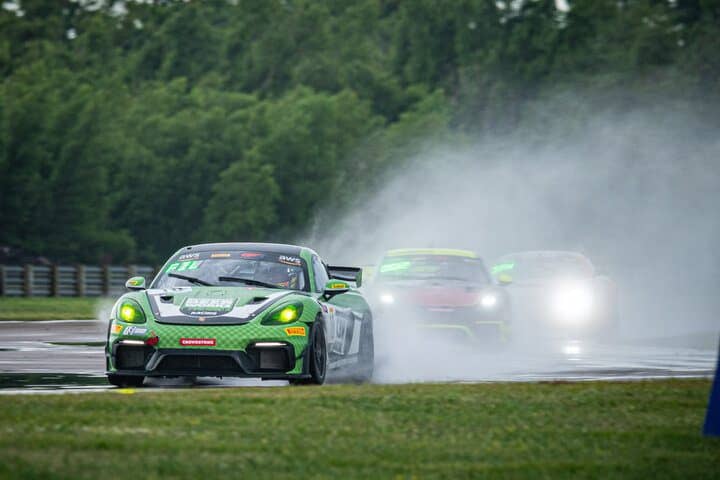 Rennsport One’s Eric Filguerias and Stevan McAleer claimed their first Pirelli GT4 America SprintX victory of the season Saturday (May 21) at NOLA Motorsports Park.  However, there was approximately four minutes of racing under green due to crashes.

Filguerias won the overall pole in his Porsche Cayman GT4 RS CS and tried to sweep into the lead.  However, there was a crash just after the start-finish line as BSport Racing’s Bryan Putt and BimmerWorld Racing’s James Walker collided and crashed.  The BMW of AutoTechnic Racing’s Rob Walker was also involved, along with GMG Racing’s Elias Sabo.  Both Walkers and Putt were out on the spot.

During the safety car period for this crash, dark clouds descended upon NOLA Motorsports Park.  After a few laps behind the safety car, lightning was sighted nearby, resulting in a complete stop down.  During the stopdown, the heavens opened, resulting in the circuit being hit by torrential rains.  The circuit was full of standing water and track crews had to take care of it before cars could go back out.

96 minutes later, the race resumed with the rain having passed, but the track completely wet.  Drivers seemed to be able to race fairly well on the wet circuit, but the Aston Martin of GMG Racing’s Jason Bell and Random Vandals Racing’s Paul Sparta spun off and went hard into the tire barriers just before turn 10.  This brought out another yellow right before the pit window was going to open.

Normally, you cannot make mandatory pit stops under yellow.  However, given the time crunch involved, SRO America officials decided to to allow it to happen under yellow.  As a result, the whole field came in for driver changes.  Filguerias exited his No. 18 Porsche and gave way to McAleer.

Given that the stops happened under yellow, McAleer was able to get the lead back once the round of stops.  Unfortunately, that was it for the racing.  The 96-minute red flag threw the schedule for the day out of whack.  The checkered flag was thrown with 14 minutes to go on the clock due to a substantial barrier repair after Bell and Sparta’s crashes.

Filguerias and McAleer’s overall victory is also a win in the Silver class.  Smooge Racing’s Kevin Conway and John Geesbreght were second in their Toyota GR Supra GT4.  AutoTechnic Racing’s Austen Smith and Zac Anderson were third, then Dexter Racing’s Ryan Dexter and Dominic Starkweather.  Conquest Racing/JMF Motorsports’ Gavin Sanders and Michai Stephens ended up fifth because they pitted a lap after the leaders.

In Pro-Am, Premier Racing’s Adam Adelson qualified his Porsche on pole and was able to keep it on the road without too much of an issue.  He was second overall to Filguerias when the red flag came out, then switched to Elliott Skeer.  They took the class win when the race was stopped.  AutoTechnic Racing’s John Capestro-Dubets and Tom Capizzi were second, then the Aston Martin of The Heart of Racing’s Ian James and Gray Newell.  NOLAsport’s Jason Hart and Scott Noble were fourth, while Fast Track Racing’s Raphael Matos and Tim Horrell.

Race No. 2 is scheduled to go green at Noon ET Sunday afternoon.  The race can be streamed live on the GT World YouTube channel.