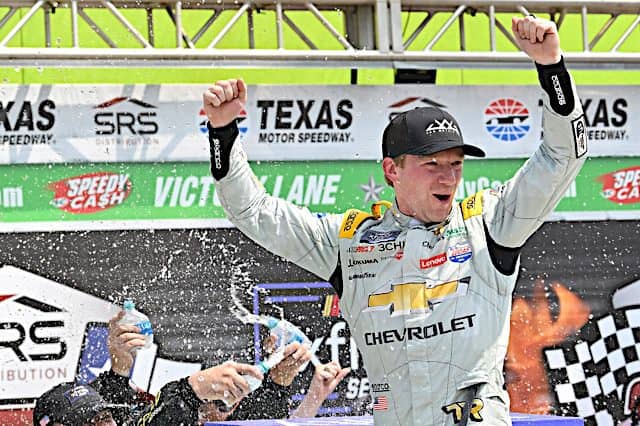 He took the No. 48 of Big Machine Racing to its first Xfinity victory and Reddick’s 10th in his career.

“First off it’s just a huge opportunity,” Reddick said after the race. “Thank you to Big Machine Racing, Scott Borchetta, Jag Metals for coming on for this race, our Jag Metals Spiked Cooler Chevrolet was just so good. Nobody at RCR (Richard Childress Racing) was really happy with where the cars were at and I wanted to help and try and make these cars get better. Try to figure out what we need to do to get back up front. We figured it out pretty quick, I guess …

“Great day, really happy to get this team their first win. What a day.”

Noah Gragson led the bulk of stage one, briefly losing the lead to JR Motorsports teammate Allgaier when Patrick Emerling slid up in front of the No. 9. The caution flag waved right after for Ryan Vargas, who appeared to blow an engine.

The No. 9 took the lead on the ensuing restart and maintained it through the next two cautions, brought out by a couple of CJ McLaughin spins. During the first caution, Daniel Hemric pitted for repairs after he hit the wall. The second caution ended stage one, and as cars slowed down, Ty Gibbs got tagged by Jeb Burton in the left rear and spun as well.

Some cars pitted before the stage break, allowing them to start stage two ahead of Gragson, Brandon Jones and Allgaier. A third JRM driver, Berry, grabbed the first position right away over Reddick. But the yellow flag flew once again on lap 56, this time for Sheldon Creed, who hit the wall in turn 4. The No. 2 Richard Childress Racing car suffered major rear-end damage as a result.

But Berry kept the lead on the way to the win in stage two, holding off charges from Allgaier, Reddick and Byron.

On the following restart, mayhem ensued. Berry got loose racing side-by-side with Allgaier on the front row and skidded down the track. As cars checked up, Gragson and Gibbs spun around and hit the outside wall, while Matt Mills slammed into Berry further back.

Things went from bad to worse for Gragson, as he spun around again and rear-ended the wall hard after a tire blew, ending his day.

Back at the front, the No. 7 had the helm for several laps until Byron passed him on lap 112. His tire slowly went down and by lap 118 it blew, bringing out the caution once again.

But as the saying goes, cautions breed cautions. Joe Graf Jr. bumped David Starr’s left-rear corner, sending Starr spinning. The No. 08 tagged Ryan Sieg, who also spun around and into the outside wall. Sieg hit the wall a second time and brought his car to the garage.

Another big wreck occurred on about lap 137 when Alex Labbe hit the outside wall and came back down into traffic. Anthony Alfredo had nowhere to go and ran into him. JJ Yeley had a big hit in the outside SAFER barrier, and Emerling and Jesse Iwuji were also among those involved. Yeley exited the car under his own power.

In the end, Reddick held on to the lead to win at Texas.

Xfinity teams head to Charlotte Motor Speedway next Saturday, May 28. Coverage for the Alsco Uniforms 300 will air at 1 p.m. ET on FOX Sports 1.