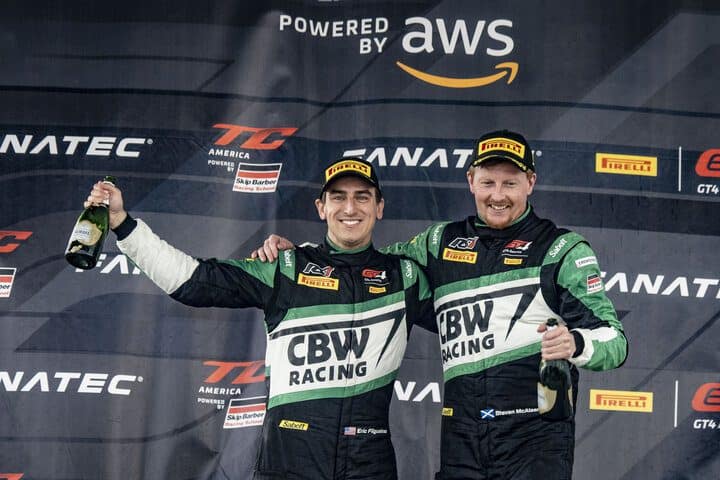 Rennsport One’s Eric Filguerias and Stevan McAleer scored their fourth straight overall Pirelli GT4 America SprintX victory to start the season Sunday (May 22) at NOLA Motorsports Park.  Combined with their win in the IMSA Michelin Pilot Challenge season opener at Daytona in January, they now have five consecutive victories together.

“I think it’s the energy that we bring,” Filguerias told SRO America’s Amanda Busick when asked about the best part of Rennsport One is.  “We’ve got such a great camaraderie.  Rennsport One brings such a great car every time we’re on track.  They put in the extra hours and care about every little detail.”

McAleer, fresh off his victory from Saturday, started from the pole in his Porsche.  The man on the move in the opening lap was Eric Curran in the invitational class Saleen 1 (the Saleen is not currently homolgated as a GT4 car).  Curran quickly moved up from the third row to second on the first lap, then took McAleer for the overall lead in his blue and yellow racer.  Curran’s time at the front was short-lived as McAleer was able to charge back past a couple of laps later.

The safety car came out 12 minutes into the race when NOLAsport’s Sean Gibbons pulled his Am-class Porsche off-course in turn 4 with a mechanical issue.  Curran made a pit stop here that dropped him out of the hunt.

Once the green came back out, McAleer had to deal with the similar Porsche of Premier Racing’s Elliott Skeer, who had the Pro-Am pole and won Pro-Am Saturday with teammate Adam Adelson.  During the pit stop window, Rooster Hall Racing’s Johan Schwartz stopped on course with smoke coming from his BMW M4 GT4, but he managed to pull off in an area that SRO America officials were comfortable with.

During the stops, Premier Racing’s No. 120 with Adelson was able to jump Filguerias and take the lead.  However, Filguerias was able to quickly run Adelson down for the overall lead and make the pass with 25 minutes to go in turn 3.   From there, Filguerias drove away to take the win.

The final margin of victory was 13.932 seconds over Adelson and Skeer.  Smooge Racing’s Kevin Conway and John Geesbreght were third, then Dexter Racing’s Ryan Dexter and Dominic Starkweather.  NOLAsport’s Jason Hart and Scott Noble were fifth.

In addition to winning overall, McAleer and Filguerias won the Silver class.  Their margin there was 41.059 seconds over Conway and Geesbreght.  Dexter and Starkweather were third.  Conquest Racing/JMF Motorsports’ Gavin Sanders and Michai Stephens had a very strong run Sunday, but were forced to make an unscheduled stop with 10 minutes to go due to a flat tire.  Additional problems ultimately put them out in the closing laps.

In Pro-Am, Adelson and Skeer dominated the day, leading nearly flag-to-flag to take the weekend sweep.  They ended up 40.188 seconds ahead of Hart and Noble at the finish.  BimmerWorld Racing’s James Walker and Devin Jones recovered from Saturday’s crash to finish third, followed by AutoTechnic Racing’s John Capestro-Dubets and Tom Capizzi.  GMG Racing’s Andrew Davis and Jason Bell were fifth.

The second half of the race was not a good experience for BSport Racing’s Bryan Putt.  First, Putt spun out on his own in turn 3 and lost a bunch of time.  Later on, Putt and GMG Racing’s Elias Sabo collided in turn 4 and spun off course.  The contact broke the radiator in Putt’s car and put him out on the spot.  Sabo tried to drive away, but ultimately pulled off as well.  Sabo was not happy with the situation afterwards.

In the Am class, NOLAsport’s Alain Stad and Seth Thomas dominated the day.  However, Zelus Motorsports’ Matt Guiver ran Stad down in the final couple of laps while Stad was right behind a battle at the back of the top 10 overall between Bell, Capizzi and Hattori Racing Enterprises’ Sean Lucas.

At the beginning of the final lap, Lucas managed to wedge himself between Stad and Guiver, spoiling the battle.   That was enough for Stad to hold on to take the Am-class weekend sweep.  Stad and Thomas ended up 10th overall, .321 seconds ahead of Guiver and Sean Whalen.  TRG’s Jason Alexandridis and Derek DeBoer were third in their Porsche, then AutoTechnic Racing’s Rob Walker and Alex Filsinger.  Rennsport One’s Nelson Calle and Juan Martinez were fifth.