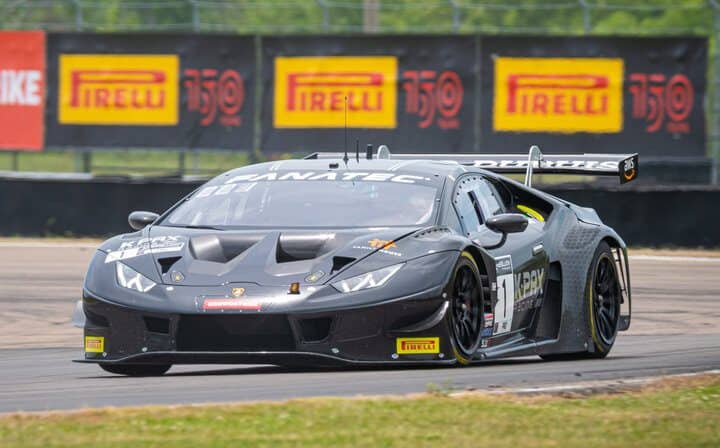 K-PAX Racing’s Michele Beretta ran down and passed Racers Edge Motorsports’ Ashton Harrison with 33 minutes to go Sunday (May 22).  From there, he pulled away to give himself, teammate Andrea Caldarelli and K-PAX Racing the weekend sweep at NOLA Motorsports Park in Fanatec GT World Challenge America powered by AWS competition.

“Honestly, I didn’t expect [this weekend] to be so…perfect,” Beretta told SRO America’s Amanda Busick.  “We missed [it] a little bit with Andrea [yesterday].  He did a very good job in the first part of the race.  He closed the gap to the cars in front and we undercutted the field.  There is nothing better than this.”

Qualifying on Saturday resulted in a jumbled starting grid.  The start of the race was even more wild as rain resulted in half the track being wet and half being dry.  US RaceTronics’ Loris Spinelli started on pole in his Mercedes with Pro-Am teams in between him and the other drivers in the Pro class.  TR3 Racing’s Giacomo Altoe started alongside and a big scramble broke out on the first lap due to the conditions.  That allowed Racers Edge Motorsports’ Mario Farnbacher to take the Pro-Am class lead and move up to second overall.  Meanwhile, Spinelli, who was fastest in the second practice session on Friday, started to pull away from the pack.

The rain that resulted in the mixed conditions at the start stopped quickly.  Given NOLA Motorsports Park’s location in Southern Louisiana, the fierce sunshine dried up whatever actually fell.

The mid-race pit stop completely changed the look of the race.  Spinelli pitted from the overall lead with a six-second lead.  He had been the class of the field for the entire race, then problems emerged with the wheel gun.  The team had problems getting the new left front wheel affixed to the car.  When the tire changer tried to change the right front tire, it just plain didn’t work.  Eventually, another new tire was put onto the right front of the Mercedes so that Steven Aghakhani could continue.

For this weekend, the minimum pit time delta for Fanatec GT World Challenge America Powered by AWS at NOLA Motorsports Park was 79 seconds.  US RaceTronics’ stop was 115 seconds.  That dropped Aghakhani from the overall lead to 11th and fourth in Pro.

As a result, Harrison in the Pro-Am Acura ended up with the overall lead and a decent advantage over Beretta.  Beretta put down a series of quick laps to run down Harrison.  Once there, Beretta hounded Harrison before making the move for the overall lead stick in turn 10.

Once in the overall lead, Beretta slowly began to pull away from Harrison.  He ultimately ended up with a lead of well over 20 seconds over teammate Misha Goikhberg with 20 minutes to go.  At that point, it began to rain again, but just lightly.

Meanwhile, Aghakhani staged a substantial comeback over the final 40 minutes of the race.  After exiting the pits in 11th, Aghakhani methodically made his way forward.  Turner Motorsport’s Michael Dinan ended up breaking a halfshaft and pulling off right as Aghakhani was sweeping past.  He then passed a fleet of Pro-Am teams to get up to fourth overall.

Eventually, Aghakhani ran down Goikhberg for second in Pro.  The two battled for a couple of laps before Aghakhani made an aggressive move in turn 8 to take the spot as Goikhberg went wide.  Even then, Aghakhani had absolutely nothing for Beretta as he continued to pull away for the win.

The final margin of victory was 13.486 seconds over Harrison and Farnbacher.  Aghakhani and Spinelli were third, then Goikhberg and Jordan Pepper.  BimmerWorld Racing’s Bill Auberlen and Chandler Hull were fifth.

In the Pro class, Beretta and Caldarelli’s margin of victory was 45.987 seconds over Aghakhani and Spinelli, while Goikhberg and Pepper were third.

In Pro-Am, Farnbacher made the pass on Altoe to take the class lead on the first lap.  For the majority of Farnbacher’s time in the Acura, Altoe remained very close behind in third overall.  He never directly challenged Farnbacher to get the lead back, but did pressure him.

The pressure for Racers Edge Motorsports disappeared entirely after the stops as they had an excellent pit stop to get Harrison into the car quickly.  That resulted in Harrison exiting the pits with a comfortable advantage over Ziad Ghandour.  Harrison only increased that lead as Ghandour ended up in a duel with Hull, Crowdstrike Racing’s George Kurtz and DXDT Racing’s Scott Smithson.  Ghandour held onto second until he slipped off-course.  That allowed Hull to get past for second.  Meanwhile, no one was catching Harrison as she easily took the win.

Farnbacher and Harrison ended up 39.789 seconds ahead of Hull and Auberlen.  Kurtz and Colin Braun were third, then Smithson and Bryan Sellers.  Ghandour and Altoe were fifth.  In Am, Triarzi Competizione of Charlie Scardina and Onofrio Triarzi finished 14th overall and took the weekend sweep.  They were a lap ahead of AF Corse’s Conrad Grunewald and Jean-Claude Saada.

Fanatec GT World Challenge America Powered by AWS teams will take a few weeks off.  The next race weekend is scheduled for the weekend of June 17-19 at VIRginia International Raceway.