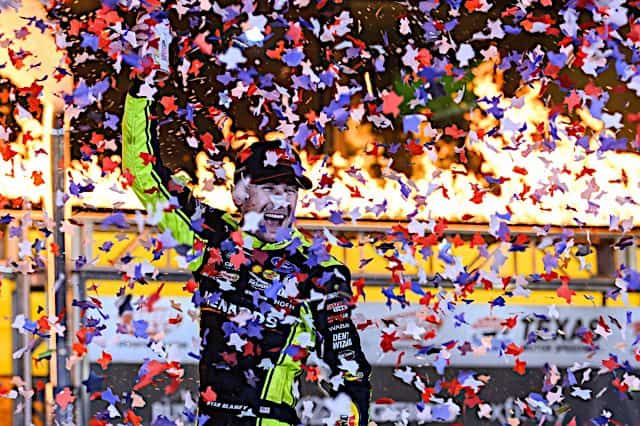 Under the Fort Worth lights on Sunday night (May 22), Ryan Blaney crossed the finish line to win the NASCAR Cup Series All-Star Race at Texas Motor Speedway and the all important oversized novelty check for $1 million.

And then he did it again.

When he approached the start/finish line on lap 125, he came within a hundred yards of an All-Star Race victory when the caution came out for last-place Ricky Stenhouse hitting the wall. FOX had already transitioned to its race finish graphics. The No. 12 team were patting each other on the back. Blaney even put the window net down.

But under special All-Star rules, NASCAR stacked them back up for overtime.

To his credit, Blaney put the window net up himself, and got back to work. It wasn’t a pass in the grass, but two laps later, the Wrangler Jeans car took the checkered flag.

Speaking to FOX’s Jamie Little after the race, Blaney acknowledged, “it was about to be real bad for us. . . I do want to thank NASCAR for letting me kinda fix [the window net] and not make us come down pit road.”

Maybe as proof of the old adage that it doesn’t matter how you win them, the old-school young gun concluded, “I know it’s not a points-winning race, but it’s gonna be a lot of fun, party’s gonna be pretty big.”

Team Penske played the All-Star game perfectly, taking advantage of the special format to start the final 50-lap stage with all three of its cars locked into the podium positions: Blaney and Austin Cindric for being the two remaining stage winners, and Joey Logano for winning the Pit Crew Challenge. It was Blaney’s outright pace in the final stage, however, that allowed the High Point, N.C, native to decisively claim his first victory in NASCAR’s All-Star event, no matter what the format was.

He looked on his way to a sure victory in the second stage as well, but with three laps remaining, Busch slowed on the racetrack with a flat left-rear tire. Ross Chastain, then running a strong third place, had nowhere to go, slamming into Busch’s Toyota at over 180 miles per hour. Chastain’s No. 1 launched into the air, collecting 2020 All-Star winner Chase Elliott. All three were eliminated.

Ross Chastain slams into Kyle Busch at Texas and launches off the No. 18 car. Wow. He's okay. pic.twitter.com/3QSt8GdPVj

Thankfully, all three were also checked and released from the infield care center.

Stage two was truly cruel to pre-race favorites. Defending All-Star winner Kyle Larson suffered a right-front tire blowout on lap 37 that sent his No. 5 Chevy into the turn four wall. Larson was running second before the failure.

Kyle Larson talks with @vincewelch after a crash ended his All-Star run. pic.twitter.com/B5ePfkalEF

Speaking to FOX’s Vince Welch outside the infield care center, the 2021 Cup Series champion had some harsh words about Texas Motor Speedway;

“You can’t pass at all, especially the leader,” mused Larson about the All-Star venue since 2021, “we’ll move on and look forward to the [Coca-Cola] 600 [and] hopefully put on some good racing there.”

After a lengthy red flag, rookie Austin Cindric got his elbows out, outdueling his Team Penske teammate Blaney for the stage two victory and the all-important first-place starting position for the 50-lap final stage.

The end of stage two saw a whole new meaning of “money stop,” as a 36.353-second total pit road time by Joey Logano’s team won $100,000 in the Pit Stop Challenge and got their driver a third-place starting position for the final stage.

Blaney won the third stage in Overtime for the second-place starting spot, giving his crew the chance to take it easy on the final pit stop. That gave him the car and the position to lead the rest of the way home.

Next Sunday, May 29, the NASCAR Cup Series once again caps off Memorial Day weekend’s long day of racing with the Coca-Cola 600 at Charlotte Motor Speedway, with coverage getting underway at 6:00 p.m. EST on FS1.

NASCAR this was the worst contrived finish in your history of god awful decisions.
There was zero reason for the caution and if Blaney had not won, the NASCAR idiot race control person should have been hunted down by the race team because that was about as stupid as stupid gets for a caution.

That ending had Brian Z(ombie) France all over it and removed any doubt that he is still in control. With five laps left I was anticipating a bogus caution just like in the past. A Ford in front and a Reverend Joe car in second place clinched it.

I had the same thought’s watching the race as Larson. It may be a new car, but clean air is still king, and racing on 1 1/2 mile tri-ovals still sucks. I’m not sure Texas deserves one race, let alone two. Every year they change the format, yet it never gets any better.

How is a race with 24 cars in it, more than half the number of regular NASCAR entrants, an “All Star Race”?

If they’re going to keep the All Star race, I suggest putting the winner of the Open in the Chase. Most Open teams are underdog’s, with no chance of getting in the Chase, this would give them all something really worth racing for. And it would sure shake up the chase too!

Last edited 1 month ago by gbvette
1
0

This was almost on the level of the tire debacle at Indy all those years ago. An absolute sh*t show of inept officiating, convoluted rules and crappy racing. I hope it kills off the useless All Star Race once and for all.