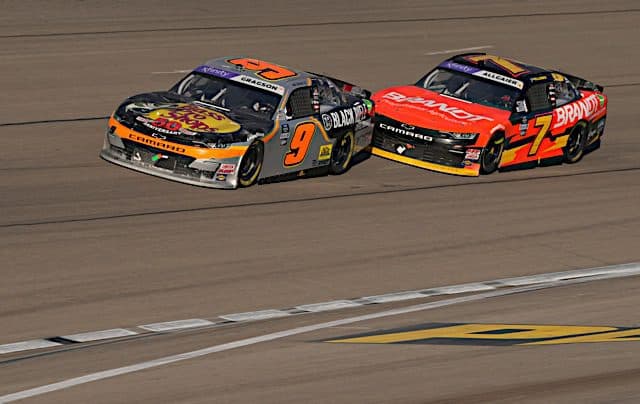 It was an all Chevy front five at the end with William Byron, Sam Mayer, Justin Allgaier and Austin Hill rounding out the rest of the group. You know the drill, though. Even though plenty of the race was run under caution, we’ve got lots to dive into, so let’s get to it.

To start out with the obvious, our first spot goes to Big Machine Racing. If you haven’t heard of them, that’s your loss. Team president Scott Borchetta is a music mogul and has proven to be quite the talented driver himself. Jade Buford piloted the first eight races in the team’s No. 48 Chevrolet, but it was Reddick who brought home its first victory today.

Personally, I’m a huge fan of their paint schemes. I mean good Lord, check out their Darlington Raceway throwback that won my scheme of the week.

If you didn't get a team photo, were you even there?
We're ready to throw it back today at @TooToughToTame! Stay tuned here for race updates and follow along as @TylerReddick drives this 48 car to the front! #NASCAR #NASCARThrowback #throwback pic.twitter.com/8yNq8ATLAp

Now, Reddick is a great driver, but he wouldn’t have been running up front all day unless the car was fast. The team has put together some great rides this season, and there should be more to come for BMR, so keep them on your radar.

The second winner of the week is none other than AJ Allmendinger, who found himself in ninth place when all the smoke had settled. Allmendinger has been red hot this season, and what’s more impressive is that he’s been able to stay consistent. He’s finished inside the top 10 every single race this season, which has earned him an average finishing position of 5.2.  Allmendinger will have bad days on the track — everyone does — but they haven’t happened yet (this will more than likely jinx him), and that fact alone is immensely commendable.

Noah Gragson earns the spot of our biggest loser this week, as after he took home the green and white checkered in stage one, catastrophe struck.

Enter: late race restarts. Berry and Allgaier were on the front row with 80 to go. Berry got loose on the bottom line, and the rest was history. Traffic behind the leaders had to swerve, and in the process, Gragson was collected and knocked out of the race. JRM was set up for another perfect day at the office, but the high banks of Texas were taking no prisoners, as evidenced by the crab-walk of shame that Gragson had to take back to the garage.

A frustrating end in Texas for Noah Gragson and the No. 9 team after winning Stage 1. https://t.co/cyf6DE1UUj pic.twitter.com/IO8xS2Y5yl

The second spot on this week’s list goes to Sheldon Creed, who simply cannot catch a break. Creed won the NASCAR Camping World Truck Series championship just a few years ago, and just about everyone agreed that a promotion was due in the near future. The promotion came this past offseason in the form of Richard Childress Racing, but Creed has had about as bad a stroke of luck as any Xfinity Series rookie in recent memory.

Today was yet another example, as he was collected in his latest late-race crash, knocking him out of any real contention and warranting a 26th-place finish. Creed is a talented, young and competitive driver. He has all of the skills it takes to compete at this level of racing. All he has to do now is get the monkey off his back, but that will have to wait another week.

Ryan Vargas did not have a great day at the track. In fact, according to his Twitter account, he was “heartbroken” after his blistering fast ride fell victim to engine trouble in the early laps. Well, Ryan, if it’s any consolation, I thought your paint scheme was badass enough to earn my scheme of the week, so let’s talk about it.

(Sorry for the tweet of choice, it’s the best picture I could find.)

This is how two-tone is meant to be done. It’s not begging for your attention ¯ it’s simply following the body lines and making a crisp, clean race car. The matching red border around the number makes the roof pop, and the simple, white sponsor logos make it an eye catching, sleek design. I’m typically not crazy about the all-white wheels, but in this case, it works. Good on you, Ryan, and better luck in the future.

With Reddick only being a part-timer in the Xfinity series, not much has changed since last week. Ty Gibbs, Hill, Gragson, Allmendinger, Brandon Jones, Berry and Allgaier are all locked in at the moment, waiting for another driver to join the ranks of the race winners.

This week’s Fuel for Thought was a tough one to come up with, I won’t lie. Could it be due to the 12 hour shift I just worked? Absolutely, or could it be for another reason?

According to racing-reference.com, 62 of the 167 laps of the race were run under caution. There were eight lead changes, and the margin of victory was almost two seconds.

The point and the question that I think needs to be asked, is this: Was this race boring? I think it depends on what type of fan you are.

If you’re the type of fan that enjoys “the Big One” and a cloud of smoke every 10 laps, this might have been your favorite race of the year. However, if you’re like me, a fan of long-run, green flag racing, then this couldn’t have been your cup of tea.

That leads me to my last and possibly biggest question: If you are the type of fan that enjoys watching the spins and wrecks, at what point is it too much? Did the 11 cautions today make it a “bad race” even from the perspective of the carnage lovers?

As always the comments thread is open, and for once, I will be diligently reading all of them, because I’m just plain out that interested. I apologize for the short and rather empty Fuel for Thought section this race, and without a doubt next week we will return to our regularly scheduled programming.

Next up on the circuit is one of the crown jewels of American stock car racing: Charlotte Motor Speedway for the Alsco Uniforms 300. Allmendinger took home the checkered flag in the last Xfinity race at Charlotte, right in the heat of the playoffs. This time, however, a new face will look to secure their spot in the playoff picture, and with it a spot in our playoff pit. The green flag drops at 1 p.m. ET, and the race will be aired on Fox Sports 1 and the Performance Racing Network.

Well you have to give Gregson some credit here. True his exit looked like me landing my Cherokee in a 25 knot crosswind.
But despite the crab, he was able to make the turn into the garage area. Rather than just blocking the entrance, & stomping off to his motorhome.

Noah Grayson will win on Saturday..

It’s a shame Big Machine dumped Jade Buford. He was improving. It’s too bad that they’re going the Buschwhacker route, although I get it.

I’d like to see someone give Parker Kligerman a shot at a full-time ride in Xfinity or Trucks. He’s run well recently as a part timer. He over performs in the equipment he gets. Look at his numbers since 2017. He usually has significantly better Average Finishes vs. his Average Starts. In trucks, 2020 he had 8 starts, Avg Start of 31/Avg Fin of 15.9. 2021, Avg Start 26.5/Avg fin 14.5 in 11 starts, and 2022 he’s had 5 starts, Average Start of 13.2 and Average Finish of 10. 2 Top 5s and 3 Top 10s. In Cup last year at Kansas, he started 40th and finished 20th, his only Cup race last year, in the friggin Gaunt Bros #96. And finally, this year in one start in Xfinity driving the #35 for Emerling-Gase, he qualified 11th and finished 12th. That’s amazing in THAT car. Someone give Kligerman a ride.