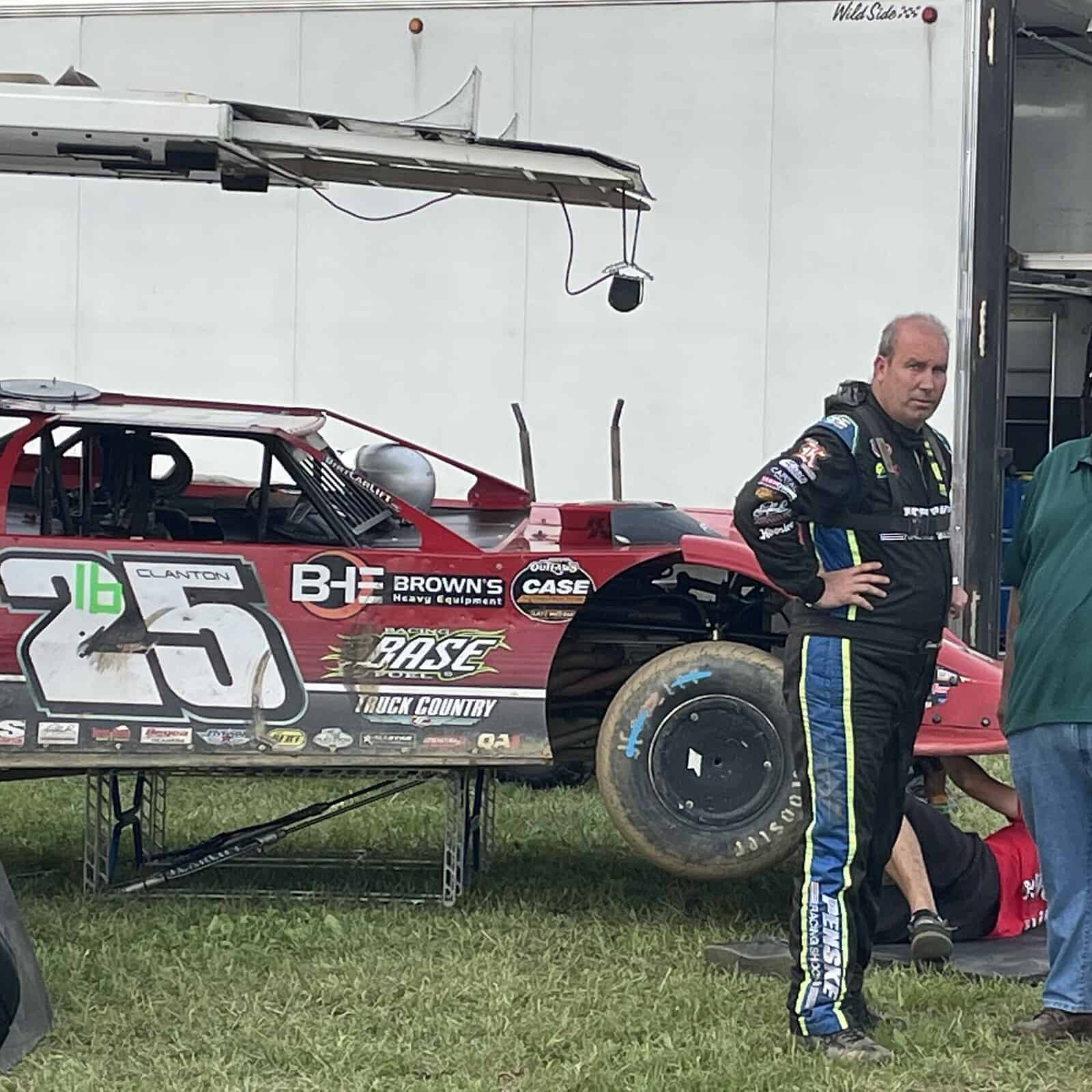 1. Did Shane Clanton get a bad rap for once?

Shane Clanton is a new regular on the World of Outlaws late model tour, and following a month of May that saw him involved in well-publicized disputes on track with both Ross Robinson and Ricky Weiss on the Lucas Oil and XR Super Series tours, Clanton was again facing wrath on his new circuit, with Tanner English verbally harassing the veteran after a caution early in their Friday heat race at Marion Center Raceway.

I was at Marion Center for this race and was honestly surprised to see English going after Clanton under the yellow. Having seen the actual video replay now (Friday night the DirtVision crew opted not to utilize their replay screens at the track, citing wind concerns), it’s a little clearer to me why English took exception to Clanton’s driving. The No. 25 definitely drove turn 1 about as wide as he could immediately prior to English’s accident.

Having said that, Colby Frye was the driver that actually tagged English. And that marked the second time in as many restarts that Frye’s No. F1 car was legitimately out of control entering the turn after a restart (Frye tagged English’s quarter panel on the first start of the same heat race, though English was able to keep his car under control on turn 2 exit).

If there’s any takeaway to be had here, Clanton better watch his back. Top-five finish or not, the Georgia Bulldog is going to have to treat every race night like a trip to Bryant-Denny the way his season is going.

2. The Greatest Show on Dirt?

As I just mentioned, Friday night marked the first World of Outlaws race I’ve attended in 2022. While the race at Marion Center isn’t likely going to down as a classic in the series annals, there’s no doubting that the event absolutely packed the pits and the grandstands; 42 super late models showed up for the race, while the crowd was proclaimed the largest in Marion Center Raceway history.

Close to home tonight with a huge crowd for 42 @WoOLateModels at Marion Center Raceway. Race #21 for 2022. #WoOLMs pic.twitter.com/LxT8LTFhy5

That can’t have been an exaggeration, because there was no place left for anyone to fit in the grandstands (the empty seats in that photo were spoken for).

In those terms, the debut of the WoO late models at the track was a rousing success. There was, however, one moment on the night that did leave me scratching my head as to what the race officials were thinking.

Immediately following opening ceremonies, WoO MC Dylan Coyle asked the crowd as is customary if they were ready for some racing, a question that the jam-packed crowd answered with a deafening roar. Pennsylvania race fans are never short of passion, but this crowd was fired up.

Only all that energy led into … the limited late model support class running their heat races. And that first heat race saw two yellow flags fly before the first lap was scored. Easy recipe for sucking the life out of a place: starting with a support class that isn’t on their A-game. How a track starts a headline program without the headline class is beyond me.

Actually, while I’m thinking about it, I do have a second quibble: The decision not to use the at-track video screens because of wind. There was definitely a breeze going at Marion Center, but if the wind that was at the track Friday night is enough to render DirtVision’s investment in those screens useless, then that’s a major design flaw. There’s a difference between a stiff breeze and a gale.

3. Up on a high hill? Trash at the racetrack

Let’s stick with “design flaws” for a second. Hilltop Speedway in Ohio appeared to nail its track prep on a night it needed to do so, hosting a big money unsanctioned super late model show on Friday night that drew several national ringers, including Winternationals hot shoe Devin Moran and Florence Speedway ace Josh Rice. The track surface proved racy, and both Rice and Freddie Carpenter kept Moran honest before he scored the $10,000 win.

The track was visibly packed from what could be seen on The Cushion’s stream of the event, so it wasn’t surprising to see the track post later in the weekend about an apparent trash problem that resulted from the Friday night race.

I’ve previously commented on this type of situation before, specifically after seeing the pit area at Talladega Short Track left looking like a landfill after the Ice Bowl in January. I’m less sympathetic here. For one, putting out trash cans is one thing, but said cans also have to be emptied. If the grandstands are full (and they sure looked it at Hilltop), the idea that cans will fill up is a no-brainer.

But the larger issue I have with this post is the track threatening to end outside food and drink over a trash problem. OK, yes, that image includes a pizza box and beer cans of a variety that I doubt fans bought from a track concession stand. But the idea that a packed crowd is going to (a) generate less trash buying concessions and (b) continue to fill said stands when told they can’t bring their own coolers in is ill-advised at best.

And did anyone else note that the trash can in that picture looks a lot like it’s upside down covering something up? It’d have fooled me in the dark.

This weekend’s Iowa swing marked the first true standalone stretch for the Lucas Oil Late Model Dirt Series to have new regular Brandon Sheppard and his Rocket Chassis house car team officially competing for the points title. And the three-time defending WoO late model champs took to their new home like a fish to water, scoring top-five finishes in the tour’s events Friday and Sunday.

Having said that, despite being in prime form for both races, each night saw the vaunted No. 1 team kept at bay by series regulars, with Tyler Erb holding him off to win at 300 Raceway on Friday night and defending series champion Tim McCreadie whooping Sheppard by nearly 10 seconds Sunday night at 34 Raceway.

Sheppard remained the series points leader after the weekend, but if new competition is what the Rocket team was looking for in switching tours, they certainly seem to have found it. It’s too bad Jonathan Davenport dropped off the tour.

Rewind back to the World of Outlaws race at Attica Raceway Park Friday night, a caution-filled affair that Kyle Larson won. The qualifying session was an apt preview of what was to come, with half a dozen cars jumping the track in turns 3 and 4. Most notable of those incidents came when both Wyatt Zimmerman and Zeth Sabo each jumped turn 4 … while on track with each other.

Whewwww hang on to your seats, Zeth Sabo and Wyatt Zimmerman 😅😅

Humor aside, I can’t say for sure whether the track opted not to throw a yellow flag or if Sabo kept his car at speed despite instructions to slow down. DJ Foos could audibly be heard being all but screamed at by race control to slow down later in the same qualifying session.

Having said that, I sure hope this was a case of the driver opting to stay in the gas rather than a conscious decision not to throw the yellow by race control. Without two-way radio communication in the cars, drivers that spin off the racing surface are left even more vulnerable than their asphalt counterparts. And sprint car drivers are the most vulnerable of the bunch, as their cars lack a starter for them to even try to get turned the right way.

It was sheer dumb luck that two drivers qualifying didn’t slam into each other on the same track on Friday. There’s no excuse for that. Either the caution flag needs to fly faster or single car needs to actually mean single car.

6. Fast and loose with Ultimate rules

Ross Bailes was credited with one of the largest wins of his career Saturday night, scoring the $20,000 King of the Commonwealth super late model race at Virginia Motor Speedway. Problem is, he was credited the win after completing only 23 of the 60 laps run.

The @ULTIMATESupers Main Event is official. Current lineup will be the finishing order for the event. Fans, thank you for sticking with us tonight.

Bailes can commiserate with Bubba Wallace on having an asterisk next to a rain-shortened win. The issue that can and should be raised here is that the decision to call the race final and award Bailes the win is in direct contradiction of the Ultimate Super Late Model Series rulebook, which states:

“any event with 50% of scheduled laps +1 completed shall be considered FINAL. Should an event be postponed due to inclement weather, the event will be rescheduled and event will start all over. No qualifying, heats, etc. will be held over. COMPLETE NEW SHOW!”

Now look, similar to last week’s rulebook confusion with the All-Star Circuit of Champions, there’s some merit to the decision that was made. In this case, rescheduling the race would have been extremely difficult and would have likely prevented the big-name national drivers that did show up from returning. But in this current climate, the decision more importantly meant that the drivers that did race the 23 laps got paid. That’s a huge deal with gas and tire prices being what they are.

Still, fast and loose with the rules is fast and loose. And the Ultimate Super Late Model Series said it themselves on their Facebook page, the race was simply called official due to “extenuating circumstances.”