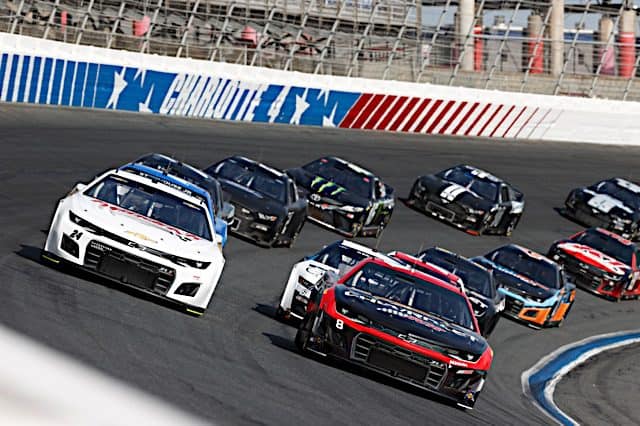 It’s a big week for NASCAR and also Speedway Motorsports.

For the 62nd time, the NASCAR Cup Series will hold its longest race of the year: The Coca-Cola 600 at Charlotte Motor Speedway.

There are 36 races on the NASCAR Cup Series schedule, plus two exhibition events: the brand-new Clash at the L.A. Coliseum and the “please put it out of its misery” All-Star Race that was run Sunday (May 22).

And for my money, as the first year of the Next Gen era unfolds, the 400 laps of the Coca-Cola 600 is the ultimate litmus test for the new car.

Because, quite frankly, for the better part of a decade, Cup racing on the Charlotte oval has failed to deliver.

Since the 1.5-mile track was repaved in 2006, followed by the introduction of the Car of Tomorrow, frequent changes to the rules package and a race surface that just plain refuses to age, the Charlotte oval has been fighting a losing battle.

There was the time the All-Star Race had two different tire compounds for teams to use throughout the race. They only tried it once.

Charlotte’s woes came to a head in 2018 when the fall Charlotte race was converted to the ROVAL road course.

For the last handful of years, the Coke 600 had the same fate as other races on intermediate tracks: being held with the high downforce, low horsepower 550 HP package.

With the Next Gen car proving to put on entertaining races on tracks like Auto Club Speedway, Kansas Speedway and Las Vegas Motor Speedway, is there hope that one of NASCAR’s “Crown Jewel” races can return to must-see viewing rather than feeling like an obligation?

“I don’t know how to answer that question,” Kyle Busch said last week at Kansas Speedway. “It’s important that we put on good shows every single week and have great races, that’s a really hard one to have a really great race on and have side-by-side action and have close knit, tight-knit racing the entire time, because let’s be honest, it’s a four-and-a-half to five-hour race. 600 miles is a long time. Anytime that you are putting yourself in a side-by-side predicament that’s taking a chance, and until it comes down to that final pit stop is when the race really starts.

“There will be times where we are running around and trying to bide time and save ourselves and our equipment. Unless you want to call it the Coca-Cola 60, it’s going to be hard to sell a 600 as intriguing.”

As a result of off-season testing, through which NASCAR came to the decision to abandon its 550 HP plans for the Next Gen car in favor of the 670 HP package, Charlotte is one of the tracks the Next Gen car has been in action the most at.

But that was before teams had 12 points races and the All-Star Race under their belts with the new car.

“Charlotte has been one of our toughest racetracks to put out a good race,” Coca-Cola sponsored driver Joey Logano said. “But I also think when we tested there a lot over the offseason we actually got to where we were racing pretty good around each other. So hopefully that’s the same case. A lot has changed since then. Right? We didn’t have cars figured out or anything like that.”

Tyler Reddick had his hands full during one of the Charlotte tests, spinning out multiple times. His accidents and others showed off a somewhat unpredictable car, which foreshadowed this season’s races at Auto Club, Las Vegas and Kansas.

It’s hard to remember a time when the Coke 600 could be described as “unpredictable.”

“The few (Coke 600s) I’ve participated in the weather didn’t really help us much with cooler temperatures with that 550 package that we had with that last car,” Reddick said. “Just a lot of on throttle time and not really having to search around the racetrack for grip. I believe that the resin and compound has all been scrubbed away from the track. It was when we did our test in the fall and it really helped the track just widen out and we were running all over it pretty quickly in our test.

“I think the potential is certainly there, but you just never know. … I think with the length of the race, how challenging the car is to drive, a lot of character and bumps at Charlotte, I think you’re really going to have to really work at it all night long inside the car. It’ll be a challenging race. I think, based off of how the test went, it has the possibility to be a really good event.”

Burnett believes the Next Gen car has, with the obvious exception of Martinsville Speedway, produced better racing everywhere this year.

“I think we’re seeing a good amount of (tire) fall off on the mile-and-a-half tracks,” Burnett told Frontstretch. “So I think that will come into to a big factor with the 600. I think you’ll see a lot of green-flag racing there … because you’re not having to move the guy in front of you or put them in a bad aero situation to get them loose or tight or whatever to get them out of the way. So when that happens, you’re less likely to have cautions.”

One crew chief whose getting his first crack at the 600 in a leadership role is Petty GMS Motorsports’ Jerame Donley.

After nine years as an engineer at Chip Ganassi Racing, he’s tasked with making the race plan for Ty Dillon‘s No. 42 Chevrolet.

“We only had one 20-lap test race back in January or December with this package,” Donley told Frontstretch. “Everyone’s setup concepts and the drivers are adapting. I think you’ll see a little bit different complexion, and you would have saw in December to the race. I think if it can spread out from the bottom, middle, I don’t know that you’ll ever get all the way to the top (lane), maybe you will in (turns) 3 and 4.

“If it can spread out there, have a couple of different groups, I think you’ll see a better race. I think in the past at Charlotte with the 550 package and high downforce you were in the throttle so much, you just run the shortest distance around the track. So nobody would really adventure up because you’re just giving up distance because you’re already carrying throttle. So this year, if it’s warm, and you see off throttle time, I think you’ll see comers and goers, and you’ll see a little bit better race.”

I think NASCAR made the right call as far as the higher HP package.

And yes, there is tire fall off. Sometimes still attached to the wheels, but mostly just from blowing out. Tires should never be the story of the race, but that’s been the case lately.

NASCAR needs to mandate the recommended pressure, so everyone knows if the problem is the tires, or the teams. As has been amply demonstrated, (think Kurt Busch, & Watermelon Man) a blown tire at speed is as much of a safety hazard as a lost wheel. Yet NASCAR body slams one, & winks at the other. That needs to change.

We’re coming to the biggest single day in racing. And I love it, but unfortunately, the 500 is usually the only really good race of the 3. Like it or hate it, stage racing does liven up what tends to be just a lot of riding around & waiting for “go time.”
I’ll have my eye on Martin Truex Jr.”

Oops, sorry, my brain was thinking Kyle, but my fingers said Kurt.

Another legacy race that should be taken out back and shot, right alongside the All Star race.

Let’s see, same car, same tire, a track the same length as Texas, and just about the same shape, what are the chances we’ll see a replay of the All Star race?

Snoozer coming. I am taking a book. I do like the long green flag segments as the crews have to work under the pressure and there will be glaring mistakes and amazing work, all on the same series.
This car has the same problem as the others: clean air is king.