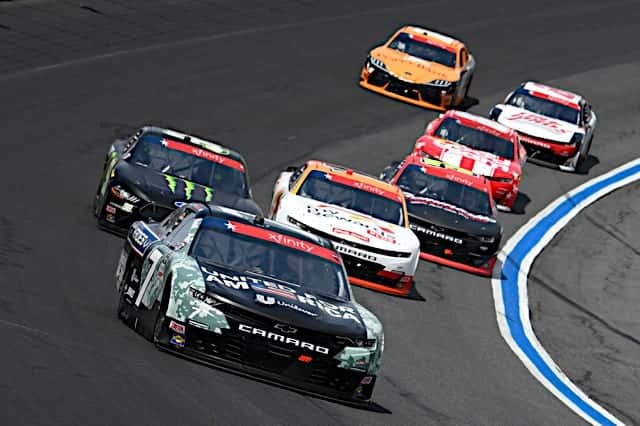 The NASCAR Xfinity Series heads from one mile-and-a-half track in Texas Motor Speedway to another, as the series shifts home for the Alsco 300 at Charlotte Motor Speedway.

Forty-two drivers will attempt to qualify for 38 spots to make the race, barring any entry list changes.

Ryan Preece will attempt his second start of the season with BJ McLeod Motorsports in the No. 5 Hunt Brothers Pizza Chevrolet. Preece finished 16th in his lone start thus far at Richmond Raceway in April.

Trevor Bayne returns to Joe Gibbs Racing in the No. 18 Devotion Nutrition Toyota. Bayne will look to make his fourth start on the 2022 campaign.

RSS Racing puts Kyle Sieg in the seat to qualify the No. 28 Ford into the race. It will be Sieg’s ninth appearance of 2022 and the No. 28’s first attempt since Talladega Superspeedway.

Shane Lee also looks to make his return with Emerling Gase Motorsports, running for the fifth time this year. Lee will pilot the No. 35 Kitty Kat Coin Chevrolet.

After Tyler Reddick took Big Machine Racing Team to victory lane for the first time at Texas, his NASCAR Cup Series teammate Austin Dillon will attempt to do the same this weekend. Dillon is set to drive the No. 48 Chevrolet in his first series start since the Darlington Raceway fall event in 2021.

Ronnie Bassett Jr. seeks to make his season debut for Bassett Racing in the No. 77 Chevrolet. Bassett has attempted to qualify for two races but failed to do so in both.

A two-time winner so far in the 2022 ARCA Menards Series season, Nick Sanchez looks to make his second career Xfinity start with BJMM in the No. 99 Chevrolet. Sanchez finished 26th in his debut at Phoenix Raceway earlier this year.

It makes no sense to have 40 spots for Cup, but less for Xfinity and Trucks. NASCAR supposedly wants to help smaller teams out, but then they do crap like this, which hurts underfunded teams trying to get something going.