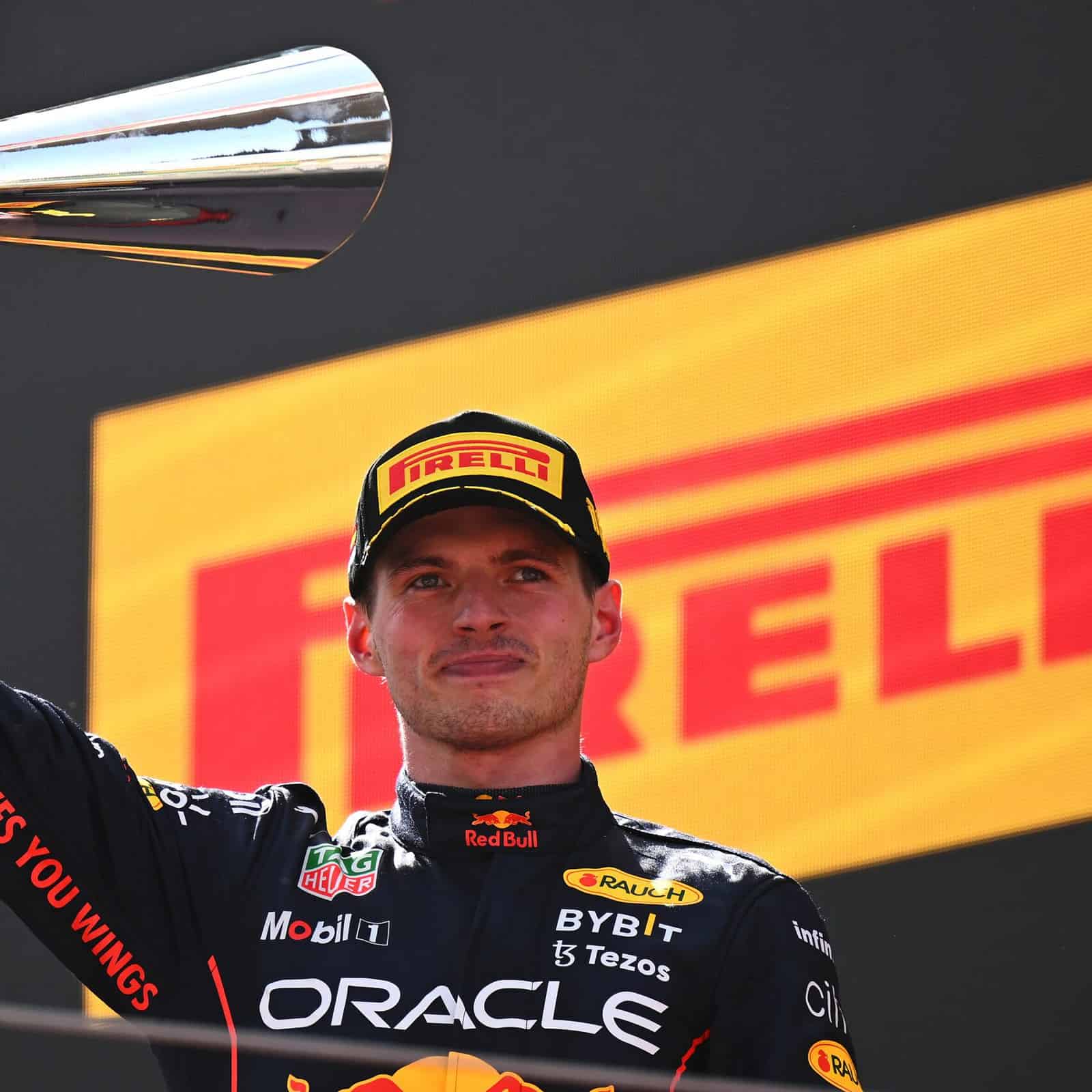 BARCELONA, SPAIN - MAY 22: Race winner Max Verstappen of the Netherlands and Oracle Red Bull Racing celebrates on the podium during the F1 Grand Prix of Spain at Circuit de Barcelona-Catalunya on May 22, 2022 in Barcelona, Spain. (Photo by Clive Mason/Getty Images) // Getty Images / Red Bull Content Pool // SI202205220434 // Usage for editorial use only //

Max Verstappen started second, spun into the gravel on lap nine, kept his Red Bull going, rejoined the track in fifth, and then drove his way to the front to win the Spanish Grand Prix.  The victory gave him his fourth of the year and moved him into the points lead, taking over from Charles Leclerc, 110-104.  With the win, Verstappen has put together a remarkable record of winning every race he has finished in 2022–employing a Formula 1 version ʻif you ainʻt first, youʻre lastʻ that looks more efficient than might be expected.

Sergio Perez gave Red Bull a massive points haul by finishing second, moving the team ahead of Ferrari, 195-169.  George Russell put together a wonderful race, starting fourth, giving both Red Bull drivers fits at times and managing to hold on to a third-place finish.  Since joining Mercedes this year, Russell has yet to finish outside of the top five.  He is holding down fourth in points with 74.

Carlos Sainz also spun, the same spot as Verstappen at turn four, and then rebounded, passing a compromised Lewis Hamilton in the final laps to finish fourth.  Finishing fifth, Hamilton put together his most Hamilton-esque performance of the season, starting sixth, suffering a puncture after tangling with Kevin Magnussen on the first lap and dropping to 19th, and then methodically driving through the field.

Valtteri Bottas again drove a fantastic race for Alfa Romeo, finishing sixth, continuing his string of solid performance for a team considered to be an afterthought.  Esteban Ocon put together a smooth and efficient race to finish seventh, while Lando Norris worked his way up from 11th to take the eighth position.

Fernando Alonso started last after a power-unit swap and worked his way to ninth, equalling his best finish of the season.  Yuki Tsunoda earned the last points-paying position, giving him three top-ten finishes in 2022.

The race appeared to be Charles Leclercʻs to lose.  The Ferrari driver started on pole, bolted away clean at lights out, and then proceeded to lock down control of the race.  While his teammate Sainz spun into the gravel on lap seven, and then Verstappen on lap 9, Leclerc continued to pace the field and made no errors.

Verstappen then fought with his DRS system, putting him in a position where he battled Russell for a number of laps and dropping him further behind Leclerc in the scoring.  In fact, for all the mid-pack battles, especially as Fernando Alonso drove his way from the back, much of the focus of the race became the battle of strategies.  Teams continually adjusted between two and three-stop plans, figuring out which worked best as the Catalunya circuit ate up Pirellis.

On lap 27, and with little warning, Leclerc suddenly lost power, sputtered to the paddock and parked his car for the day, registering his first DNF of the season.  Not long after, another Ferrari-powered ride, the Alfa Romeo of Alfa Romeo, also retired and concern spread as to whether reliability, not only for Ferrari-powered cars, but others might also face reliability issues on the hot Spanish track.

No other driver encountered the same issue, however, and Red Bull put together a masterful second half of the race to put Perez and then Verstappen in the lead.  From there, differing tyre strategies wound up putting Verstappen in front, but not without a bit of a nudge coming in the form of team orders.  For the last 15 laps, Verstappen opened up a gap and cruised to a win at the track where he earned his the first of his career five years ago.

– One of the good things about this race is how much teams opted for differing ways of managing their drivers.  At one point, some drivers seemed to be on one-stop strategies, hoping to make medium compound tyres last for a long stint and blast through with fresh softs at the end.  The track had other ideas.

What became apparent by lap 20 or so is that teams would be forced into choosing between two or three-stop approaches.  Even when teams pitted became a big part of the discussion, but ultimately, the faster teams manipulated things best and there would be no performance like Alex Albon using one stop to finish tenth and surprise by walking away with points.

– The season has brought about nothing that signals Lewis Hamilton is still a driver to beat.  He has routinely been beaten by his teammate Russell, his race pace has been down, sometimes he has seemed to be disengaged, and perhaps overall he has been acutely aware that the current Mercedes is not up to form.  This weekend, with upgrades enabled, the usual Hamilton returned.

Even though he offered to park his car after his collision with Magnussen, thinking it best to preserve the engine, the team refused to let him do so, telling Hamilton that P8 was a potential finish.  Apparently, their math was off because Hamilton made it to P4 before the team found a water leak that meant he had to coast to the finish and allow Sainz to pass.  This kind of driver, one that netted him Driver of the Day, is exactly the time of thing expected from the seven-time champion and might be the ignition for better results for the year.

– Watching Leclerc drop out of the race from the lead looked terrible.  He was in a clean and clear position to walk away with the win and yet his Ferrari could not hold together to get to the finish.  Coming the race after Verstappen passed Leclerc for the lead in Miami with relative ease, and there is reason to believe that Ferrari is once again faltering.

Ferrari has shown speed at times throughout the past decade but has never maintained their performance.  The team has often given fantastic races and followed with ones where they look like a wholly different team.  With Red Bull taking over the constructorʻs lead and Verstappen doing so in the driverʻs there is reason to question as to whether the Maranello outfit is once again not up to the task of competing for championships.

– Valtteri Bottas continues to show that he was the best hire of the offseason.  Aside from a DNF, he has yet to finish lower than eighth and his sixth-place finish puts him eighth in the standings one point behind Lando Norris.  Considering his teammate, Zhou, is a rookie, and Bottas is a driver doing the most with what has been a forgettable organization.  For Alfa Romeo, every point that Bottas scores is a boon, and the team currently sits in fifth–a position no one would have thought possible at the start of the season.

– Lewis Hamilton after his comeback to fifth, “I’m just really grateful that I was able to come back and grateful to the team for keeping their head down and for all the amazing work to get us to this improvement. The car felt great in the race, our pace is closer to the top guys which is amazing. I was just really unfortunate at the start to get the puncture but I didn’t give up – that’s what we do, right?”

– Charles Leclerc reflected on his DNF with positive attitude, “Of course this one hurts, because we were in front all weekend and worked really well. I know that things like this can happen sometimes and in moments like these, it is important to look at the positives. Our pace was very strong in qualifying and in the race and the feeling in the car was really good. We made progress in terms of tyre management, which is something that has been a weakness in the past few races.”

– Fernando Alonso celebrated his ninth-place finish in front of his home fans, stating, “It’s great to finish in the points today especially after our bad qualifying yesterday, so I’m very happy with that. The atmosphere was special today and even though we were starting last I feel like we managed to put a show on for the fans. It feels a bit like a victory!”