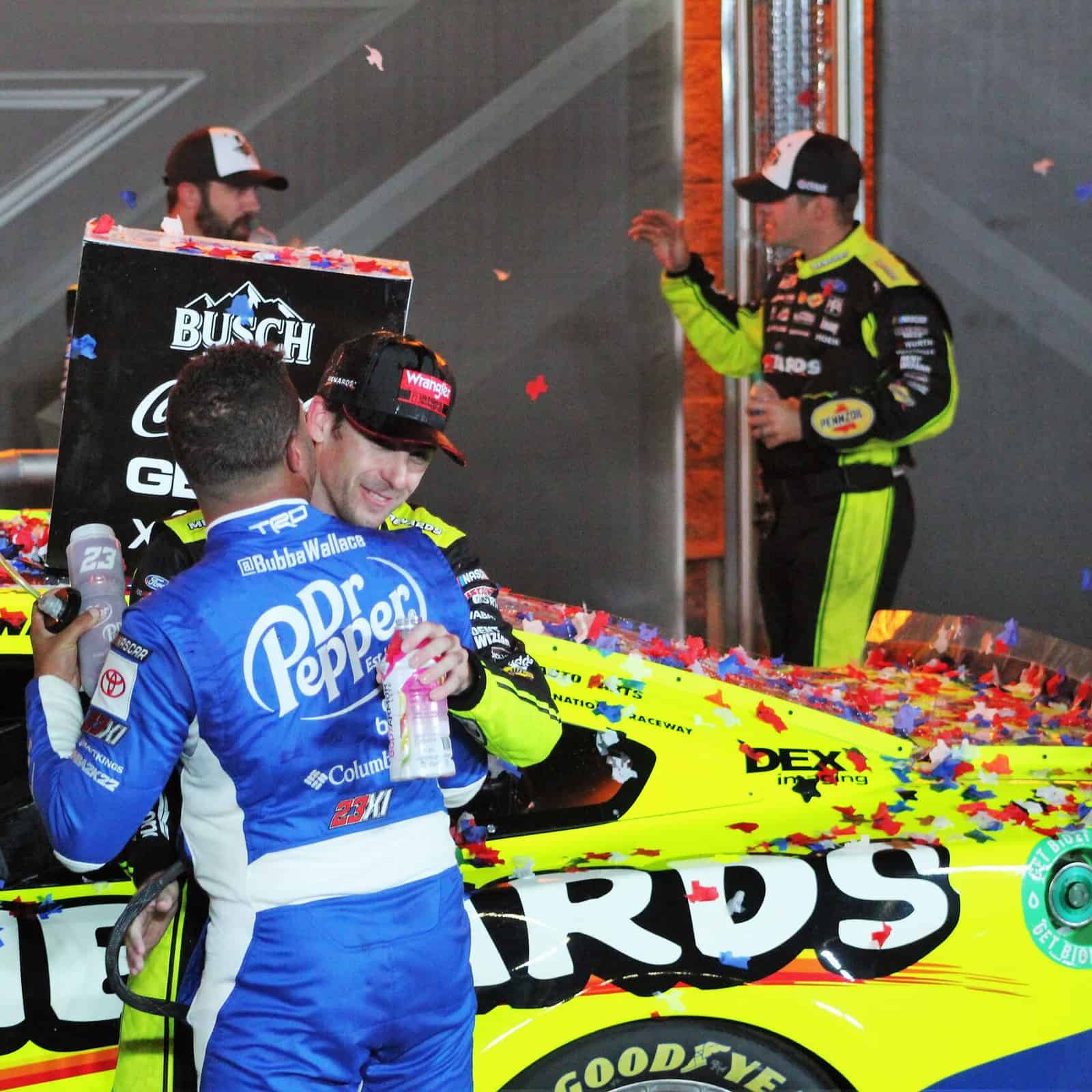 Who… should you be talking about after the 2022 NASCAR All-Star Race?

Despite being winless in points-paying races this season, Ryan Blaney edged out Denny Hamlin in overtime to win $1,000,000 in the 2022 NASCAR All-Star Race.  The Team Penske driver won stage three, which put him in a great position on the restart for the final stage.

Blaney was just one of four drivers to lead the entire race, and he ended up leading 84 of 140 laps run.  He took the lead from William Byron on lap 57 and never looked back.  The race was extended 15 laps over its original 125-lap distance due to overtime restarts in various stages, as well as the final caution occurring mere seconds from the finish line.

Unfortunately, people may not remember Blaney’s win as much as they’ll remember the problems that plagued this event.  Who knew an exhibition race could be filled with so much controversy?

And don’t forget… Daniel Suarez put on a show from the start of the night, all the way up through the final lap.  The Trackhouse Racing Team driver transferred into the All-Star Race by winning the All-Star Open, then attempted to do what Michael Waltrip did in 1996 – win the All-Star Race before he even won his first career points-paying event in Cup.  Although Suarez came up short, he ran in the top five for over half the race and brought his No. 99 home a strong fifth.

Last week at Kansas Speedway, tire issues plagued teams throughout the race.  With a new car and wheel, mistakes will be made, which is understandable.  The new 18-inch wheel has proven to be a challenge for teams to get adjusted to, and Goodyear is also learning how to make racing tires in accordance with the wheel specifications.

But we have reached the point in the season where tire failures are becoming common every week, and that’s never good.  Sometimes, tire failures can be chalked up to teams not preparing their sets well enough, whether it’s air pressure or some other extenuating factor.  Other times, it might just be the track itself that proves it’s time to go back to the drawing board and find a new compound that works.

However, we’ve seen a variety of teams lose tires at a variety of tracks.  While no one lost a wheel completely during the All-Star Race, tire failures were aplenty, costing several drivers a chance at contending for $1,000,000 as well as resulting in some scary hits.  At some point, Goodyear and NASCAR need to evaluate this new wheel and tire themselves to determine if the failures are something more than simple team miscalculation.  Goodyear has continued to deflect the blame, but when will Goodyear themselves step in and say enough is enough after yet another race with tire issues?

Where… did the other key players wind up in the 2022 NASCAR All-Star Race?

Aside from Suarez, the other Open transfers produced mixed results in the All-Star Race. Segment two winner Chris Buescher had a quiet, consistent performance, running in the upper mid-pack for most of the event.  Further back, Fan Vote winner Erik Jones as well as segment one winner Ricky Stenhouse Jr., struggled to even crack the top 15 most of the night. Both suffered bouts with the wall during the final stage with Stenhouse’s incident sending the race into overtime (and controversy).

Defending All-Star Race winner Kyle Larson finished dead last after blowing a right front tire and sliding head on into the turn 4 wall on lap 37.  Larson then slammed NASCAR and Texas Motor Speedway, saying that it was polesitter Kyle Busch’s race to lose because it was hard to pass anyone – especially the leader in clean air.

Well, that sure jinxed Busch, who led all 25 laps en route to the stage one win as well as the number one starting position for the final stage. All Busch needed to do was finish inside the top 15 and on the lead lap in every subsequent stage.

Two corners after the Larson interview, Busch’s right rear tire went flat off turn 4. As he was attempting to get out of the way of everyone, Ross Chastain had nowhere to go and drove over the left rear of Busch.

Chastain’s car lifted up onto its side for a scary moment before landing on all four wheels.  Chase Elliott was tagged in the left rear by Chastain’s uncontrollable car and he smacked the wall hard as well.

For the first time since 2013, the red flag was displayed during the All-Star Race to clean up the crash.  In a span of 10 minutes, four of the fastest cars in the race, including the polesitter, were done for the evening.  That opened the door for stage two winner Austin Cindric to claim the pole for the final stage.

When… was the moment of truth in the 2022 NASCAR All-Star Race?

Blaney had the race won off of turn 4 on the final lap.  Stenhouse hit the wall coming off turn 2 and the caution came out.  In a normal, points-paying race, Blaney would have taken the caution and the checkered flag to win.  But for this event, NASCAR said that the race must finish under green, so they had to run under a green-white-checkered finish.

An additional problem was that Blaney had removed his window net, thinking that the race was over.  This move caused a panic within the No. 12 team, because once they figured out the race was not over, they realized that the window net would need to be reattached. The FOX Sports broadcast team noted that usually the biggest, strongest person on the team fastens the window net at the beginning of the race (or after a rain delay).

Blaney said in his frontstretch victory interview that NASCAR allowed him to fix the window net as best as he could and continue, and he managed to hold on to the lead in overtime to win.  In some people’s eyes, he held on to win twice.  In other people’s eyes, he should have been black-flagged for safety reasons.  Regardless, in the end, the overtime finish was unnecessary given that Blaney was only a few car lengths from crossing the line anyway before that final caution.

NASCAR heads home to Charlotte Motor Speedway for its traditional Memorial Day marathon, the Coca-Cola 600.  This race will be another test of the Next Gen car, this time a test of endurance as the Cup Series runs its longest race of the season as a kickoff to the summer stretch.

As the final race on a day that has typically been called “The Greatest Day in Motorsports,” fans will see special patriotic paint schemes as well as tributes to fallen soldiers on the windshield where drivers’ last names are usually placed.  For the teams, Charlotte presents an opportunity to compete in NASCAR’s backyard in front of everyone who stays back at the shop from week-to-week.

How… much does the NASCAR All-Star Race mean in the context of a season?

The All-Star Race doesn’t have as much impact on the season as one may think it does as its winner typically doesn’t go on to win the Cup title. However, the last two All-Star Races were won by the eventual champion, so if Blaney capitalizes this year, there might be an argument that a trend is forming in that regard.

However, the All-Star Race may give teams an idea of what they have come playoff season.  Texas Motor Speedway is the first race of the Round of 12 in the Playoffs and most, if not all, of the drivers who will be in the 2022 postseason competed in the All-Star Race.

Therefore, the All-Star Race, in a way, helps playoff contenders recognize what they have for when they return here in the fall. Texas also provides a decent comparison to a good majority of intermediate races left on the schedule as summer approaches.  Granted, each track runs differently to a driver, but it still gives teams an idea of where their intermediate program is without the risk of losing points toward the championship.  It gives teams a chance to try new things and not worry about points if it doesn’t work.

I dont understand why the media and others blame goodyear for tire problems. Its the teams trying to be to aggressive with camber and tire pressure. All the cars run the same tire. So if it was the tire all teams would blow tires. And in this race the penske cars did not have tire problems. Larson, bush and maybe a few others had problems but its normally the same teams in every race. Its not the tires or if it was every team would be blowing tires and that is not happening so why blame the tire.

I was thinking the exact same thing about Larson’s comment about Busch, at the time.

As for thinking that Blaney should have been black flagged for the window net.

I expect Hamlin was about the only one thinking that. But I do think he should have been allowed to pit W/O penalty to get it secured safely.

Maybe the NA$CAR brain trust in their infinite wisdom can figure out a way for the driver to secure the window net. BUT! I wouldn’t count on that being a priority when they have EVENTS to manipulate.

Hey one question we haven’t answered is why do morons that are more worried about t.v. ratings/appearance keep embarrassing themselves trying to control these races?

The BZF sycophants are still trying to set up game 7 moments at the end of each of the examples of Brian’s product.