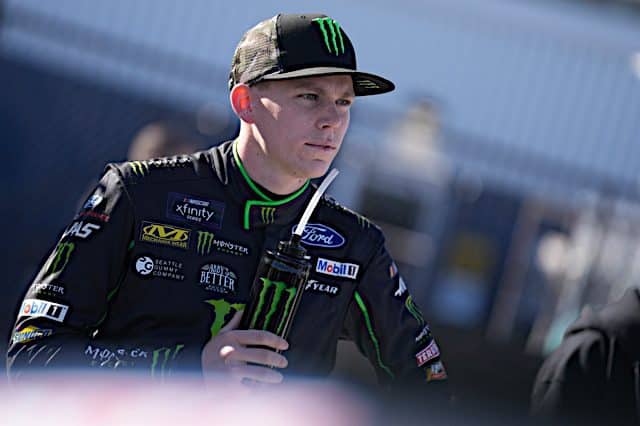 The 2022 NASCAR Xfinity Series is 12 races into the season — just beyond the one-third mark.

Several moments have highlighted the season so far, such as Austin Hill winning at Daytona International Speedway and the run-ins Ty Gibbs has experienced with Ryan Sieg, John Hunter Nemechek and Sam Mayer. And most recently, Tyler Reddick scored the first victory for Big Machine Racing at Texas Motor Speedway this past Saturday (May 21).

Meanwhile, Riley Herbst is one highlight that is flying just below the radar.

Herbst stepped into the No. 98 Stewart-Haas Racing Ford in February 2021 to replace Chase Briscoe, who scored nine wins in 2020 and raced for a title in the Championship 4 race at Phoenix Raceway before graduating to the NASCAR Cup Series. Before that, Cole Custer had a successful 2019 season for SHR, winning seven races and finishing second in points.

The level of expectation for Herbst was substantial. He stepped into a car that competed for wins every week the year prior and nearly won the championship. He was essentially nearly doomed to fall short of expectations.

In all of 2021, Herbst scored 13 top 10s, five top-five finishes and averaged a finish of 17.1. Not only were these numbers down from 2020 when he was with Joe Gibbs Racing (four top fives, 17 top 10s and a 16.0 average finish), it could be argued that a major factor in him making the 2021 Xfinity playoffs was due to Michael Annett’s absence in five of the final nine regular-season races.

In the first 12 races of last season, Herbst only finished inside the top 10 three times and finished 25th or worse five times. His results averaged a 19.3 finish.

After 12 races in 2022, Herbst has nine top 10s under his belt, accompanied by four top fives. His three finishes outside of the top 10 are a 14th at Las Vegas Motor Speedway, a 38th at Phoenix and a 26th at Circuit of the Americas. He’s slashed his average finish to an 11.1, year-over-year.

To be fair, Herbst’s resume was and still is not as stout as Briscoe’s. Briscoe won the 2016 ARCA Menards Series championship before competing in the 2017 NASCAR Camping World Truck Series campaign, where he won the season finale race before also scoring a one-off win at Eldora Speedway in 2018. Briscoe also won twice across 50 Xfinity starts from 2018-19.

Herbst has two ARCA victories, at Pocono Raceway (2017) and Michigan International Speedway (2020). Briscoe experienced more success in his career before 2020. Yet, Herbst drove two full-time seasons (2017 and 2018) for Joe Gibbs Racing in ARCA, scoring only a single win. When he drove for JGR in Xfinity in 2020, you could count the number of races in which Herbst was a contender on one hand.

Maybe the expectations for Herbst should have been a reflection on what he had accomplished before stepping into the No. 98, instead of being set by what that car accomplished in 2020.

But focusing on the positives, in six races in 2022, Herbst has matched or bested his career-best finish at six tracks: Atlanta Motor Speedway (fourth), Darlington Raceway (third) and Texas Motor Speedway (eighth) were tracks at which he posted a career-best, while Daytona (fourth), Richmond Raceway (fifth) and Martinsville Speedway (sixth) are the three at which he matched his best result.

It is rare for a driver, especially a young gun like Herbst, to step into a car and immediately experience success. Look at Austin Cindric; he split his 2018 season between three cars at two different organizations and didn’t have much success. When he was given the full reins to the No. 22 Team Penske Ford in February 2019, Cindric was nowhere near the driver that eventually won a championship in November 2020, let alone the driver who nearly repeated in November 2021.

Similarly, Briscoe spent a year in the No. 98 where he won just one race before his tear in 2020.

In the final two-thirds of 2021, Herbst and the No. 98 team showed signs of improvement. After 12 races last year, he was 40 points behind the cutoff. By the end of the regular season at Bristol Motor Speedway, he had a 100-point advantage over Annett, the first driver outside the playoffs (Annett was 14th and Gibbs 13th in points, but Gibbs was ineligible for the playoffs due to being part time).

In fact, in the final six races of the regular season in 2021, Herbst scored five top 10s. The head of steam that had been built crashed back to Earth after three DNFs in the opening round of the playoffs. Crashes at Las Vegas Motor Speedway and Talladega Superspeedway, married with a suspension failure at the Charlotte Motor Speedway ROVAL, buried any chance of Herbst advancing from the Round of 12 to the Round of 8.

In the final four races, Herbst posted four finishes inside the top 13, and aside from the three-race stumble, the foundation for solid finishes that began at the Indianapolis Motor Speedway road course in August has carried over into 2022.

After Texas, Herbst sits eighth in points and has a 78-point advantage over 13th-place Anthony Alfredo. The one thing Herbst isn’t doing is leading laps — he’s only led a single lap all year long, which came at Martinsville. However, I won’t consider that a negative at this time. The goal of the No. 98 was to finish races and capture top-10 finishes. Herbst is on track to top his 2021 mark of 12 top 10s in the next six or seven races, just beyond the season’s halfway point. That is a drastic improvement in and of itself.

So, are we sleeping on Riley Herbst? A little bit of ‘yes’ and a little bit of ‘no.’ ‘Yes’ because he is running considerably better throughout a race from one year ago, and I don’t believe he will have an issue making the playoffs. However, I say ‘no,’ and it is a light one because Herbst and the SHR team are still missing the last little bits to find themselves in victory lane without a wild finish.

With the speed JR Motorsports and JGR cars possess, I don’t see Herbst beating them straight up at this time. But with the right circumstances, I wouldn’t count him out in a last-minute shootout. The more he finishes inside the top 10 and doesn’t make mistakes, the more it looks like he just needed more time to adjust to the team and learn the car. The 2022 version of Riley Herbst is the best one yet.

The needle is moving in the direction of victory and not defeat. The expectations were probably too high in 2021, but in 2022, Herbst may have been written off too soon as an also-ran amongst the “Power 12” teams.

Only A.J. Allmendinger has more top 10s than Herbst. How many people predicted Allmendinger would be 12/12 in top 10s in 2022? Very few. But what about those who predicted that Herbst would have the second-most top 10s 12 races into the season? I’d venture to say zero.

Currently, Herbst has a six-race streak of top 10s, and as long as he keeps his Monster Energy cans square and facing straight, I see no reason why that streak has to end at Charlotte — or anytime soon.