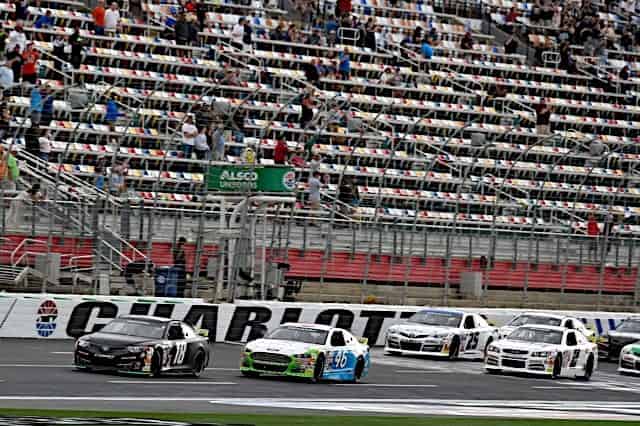 The fifth race of the 2022 ARCA Menards Series season hits Charlotte Motor Speedway this Friday (May 27) to kick off a patriotic weekend of racing across every major NASCAR series.

Current NASCAR Xfinity Series competitor and last year’s winner Ty Gibbs will not be racing in the event. However, Gibbs’ Xfinity teammate Brandon Jones is entered in the race driving the No. 81 Toyota. Jones won the ARCA race in Charlotte back in 2018.

“I will be looking for how the car progresses, work on passing areas and competitive restarts the whole time to use towards Saturday’s race,” Jones said in a team release.

Corey Heim and Drew Dollar had the two best cars at Kansas, but they crashed out. Billy Venturini, Heim’s car owner, had some colorful words for Dollar who caused the wreck. Although Venturini and Dollar exchanged tweets, only time will tell if the tension between the teams has simmered. Both drivers will be competing in this race. Heim and Dollar finished second and third in last year’s race at Charlotte.

“We were really good there last year,” Dollar told Frontstretch. “Then at the finish, on old tires we were able to get into the top three. I feel really good about Charlotte and I hope to take my Kyle Busch Motorsports team to victory.

Rev Racing teammates Nick Sanchez and Rajah Caruth enter the race tied for the points lead after Caruth entered Kansas Speedway as the points leader. Sanchez drove his No. 2 Chevrolet to back-to-back wins at Talladega Superspeedway and Kansas to tie his teammate for the lead.

“I’m going to have to make sure I’m ready both physically and mentally for the Xfinity race, but the goal for each race is the same,” Sanchez said in a team release. “I’m always ready and I prepare myself to achieve the best performance on the track.”

Seeking his first ARCA win, Caruth will debut a new paint scheme for his No. 6 Chevrolet.

I’m so honored and excited to finally get to represent my school on the track!! Check out our @WSSURAMS and @WSSU_MSM Chevrolet for next Friday’s @ARCA_Racing race at @CLTMotorSpdwy.#hbcupride | #teamchevy pic.twitter.com/5vFGjQyVuZ

Daniel Dye looks to crash the Rev championship party while looking for his first win of 2021. Dye currently sits third in points looking for some momentum to jump Sanchez and Caruth after overcoming some off-track legal issues between the Talladega and Kansas races.

A fitting entry for the Memorial Day weekend race is Josh White who is a U.S. military veteran. The 31-year-old former marine will pilot the No. 03 Ford for Clubb Racing Inc. A native of West Virginia, fellow company Kanawha Ammunition from his home state will be the primary sponsor.

“I’m very excited to finally go back out on track and race,” White said in a press release. “Especially at Charlotte, which is in NASCAR’s backyard. I’m excited to meet my crew as well, and make new friends.”

“I’ve been following the season for sure, and I have a good eyeball on who is going to be the ones to beat,” White added. “I’ve been prepping with iRacing, which I know is not a real car, but it’s close enough. I’m very familiar with the track and I’m very confident that we can finish well if we can stay out of trouble.”

The ARCA starting lineup will be set via the results from the 45-minute practice session earlier on race day.

The General Tire 150 will take place on Friday, May 27 at 6 p.m. ET with TV coverage provided by FOX Sports 1.

Thank goodness that little pip squeak Ty Gibbs won’t be running in the ARCA event. Now, it can be a fair race.