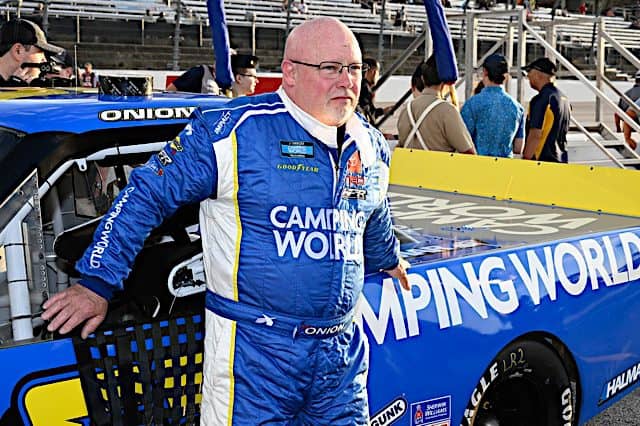 Last Friday night (May 20) at Texas Motor Speedway, Todd Bodine made his third of six scheduled NASCAR Camping World Truck Series starts in a quest to reach 800 across the board in the sport’s three national touring series.

Bodine made his Truck Series debut during the inaugural season in 1995 when he made five starts for RFK Racing. During that short timeframe, he posted five top 10s, including a best finish of fourth in his debut.

After that, it wasn’t until 2004 when he returned to the series to run 10 races that included wins at Auto Club Speedway and Texas for Germain Racing. He returned the following year to run full-time and made 10 starts for Tom Eldredge before returning to Germain Racing where he spent the majority of his Truck Series career. During the 2005 season, Bodine scored five wins, including three straight to close out the year but came up short in the championship battle.

In 2006, Bodine scored the first of two championships he has to his name, but only won three races that year. He started off with a runner-up in the season opener at Daytona International Speedway and never dropped lower than third in the standings. Completing 99% of the laps run that season (4,075 of 4,079), Bodine scored 16 top 10s and an average finish of 8.4 en route to a commanding championship win by 127 points over Johnny Benson.

He won the championship again in 2010, this time with four wins, 17 top fives, 20 top 10s and an even more impressive 6.4 average finish. In fact, Bodine was so consistent that season that he wrapped up the title a week before the season finale.

The last time he raced in the Truck Series prior to this season was in 2013 when he ran a handful of events for ThorSport Racing and a single one for the now-defunct Turner Scott Motorsports. What started as a single-race deal for the season opener at Daytona International Speedway turned into a few more races, but ultimately, sponsorship sidelined the two-time champion. At the time, he had a combined 794 starts in the NASCAR Cup, NASCAR Xfinity and Truck series.

Fast forward to late 2021 and it looked like Bodine might be heading back to the race track. A social media campaign led by Camping World chairman and CEO Marcus Lemonis resulted in enough fan backing for Lemonis to foot the bill to put Bodine behind the wheel for six races this season.

The challenge seemed simple enough. Lemonis wanted just 800 reasons why fans wanted to see Bodine back behind the wheel.

Hey @Team_Onion people say you are 6 away from 800 starts. I need 800 reasons from your fans to do this for 6 .. they must use #goodsamOnion pic.twitter.com/5ra46C7ghA

“We had talked about it the year before and of course, COVID going on and everything, we just kind of let it go and didn’t think about it and didn’t do anything with it,” Bodine told Frontstretch last week at Texas Motor Speedway. “And when he did it the second time, it was like OK that was all on his own. He came out with it and he must be serious because he wouldn’t do it if he wasn’t serious.

“Then for the fans to step up and give… how many did they have, Janet?”

“That was incredible to know the fans appreciated and cared about me enough to do that,” Todd said with a big smile on his face.

But getting that sponsorship backing for those six races was only part of the puzzle. He also needed a team to race for.

Last December, Bodine revealed in an interview with FOX Sports that he would return to Toyota, the same manufacturer he drove for during both of his championship seasons.

That quest for 800 starts began nearly three months ago at Las Vegas Motor Speedway and continued at Darlington Raceway less than two weeks ago before moving to Texas last weekend with finishes of 21st, 10th and 13th.

“Obviously, we’re here to win,” Bodine explained. “That’s why these guys work on it so hard and that’s why we unload it every week.

“But the reality is for us and where we are and the seat time I’ve had, a top 10 is really good. We did that at Darlington, should’ve done it at Vegas. I made a mistake at Vegas. To me, that’s satisfying.”

Interestingly enough, despite being away from the series for nearly 10 years, getting back behind the wheel is “pretty seamless” and “not as hard as you would think” for Bodine.

“It’s like riding a bike. It comes right back to you.”

See also
Dropping the Hammer: Will Next Gen Car Revive the Coca-Cola 600?

Being behind the wheel is a bit different this time around, though. Bodine has a different perspective now, having spent time in the booth watching his current competitors race, along with interviewing them.

“Watching it every week from my couch at home and interviewing these guys and doing reports on them, you learn who’s doing what and it hasn’t been that big a learning curve because I kinda knew already. It’s pretty much you gotta be careful around everybody.”

Of course, seeing the joy in Bodine’s face every time he’s back in the driver’s suit leads to the natural question of whether he would return to racing full-time.

“I’ve been asked that question a lot lately. If we had full sponsorship and it was the right deal, I would consider it. But it’s going to take a lot. I’ve gotta get in shape, not just physically but mentally and there’s mental exercises you can do for it. It would take a lot, it really would. But right now I’ve got a great job at FOX and it’d be hard to give that up.”

When it comes down to the basics, though, the best part for Bodine being back racing is “just turning the wheel. Just getting in there and going.

“People don’t realize how much it means to a driver to get that opportunity. If it’s not even the truck series, it’d be doing some vintage racing somewhere, which I’ve done some. It’s just so much fun.

“And that was the one thing to do these six races. Yeah, we wanna win but we wanna have fun and if we can’t have fun, we don’t want to do it.”

Bodine has already had numerous friends at his three starts with plans for more to come at Sonoma Raceway, Nashville Superspeedway and Pocono Raceway where his final three races are scheduled.

“It’s about enjoying this,” he explained. “When athletes, drivers particularly, usually when they come to the end of their career it just stops because you didn’t get a ride or something like that and there’s no fanfare, there’s no sendoff.

“You see these guys doing retirement tours and that’s great that they have that opportunity. Well I never got that. In the middle of ’13 we just quit racing and for us, this is like a retirement tour, a sendoff, a thank you to the fans and everybody involved and when we’re done, we’re done.”

Onion Head is back. Let the cautions begin.