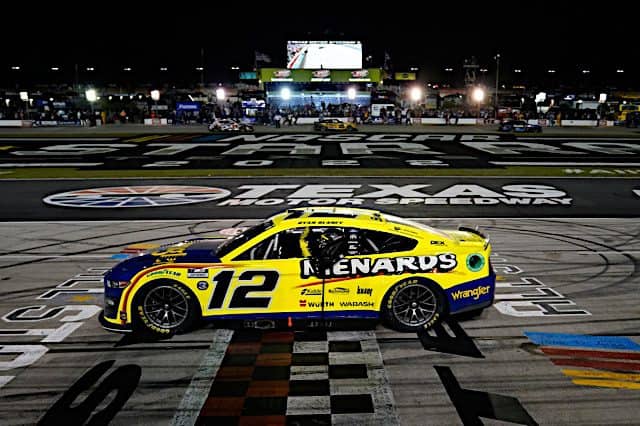 Ryan Blaney‘s window net debacle in the NASCAR Cup Series All-Star Race happened five days ago — everything that can be said about that incident has already been said — but I still can’t get over how it’s just the latest step down a bad road for NASCAR safety.

In case you missed it, Blaney was like 50 feet from taking the checkered flag when a caution that shouldn’t have been a caution flew because Ricky Stenhouse Jr. hit the wall and kept going.

Normally, the race would’ve been over. But because it was the All-Star Race, the race has to end under caution, which is a great move. It’s just the situation that brought out the caution that was questionable, something that NASCAR Senior VP of Competition Scott Miller admitted it messed up on after the race.

The entertainment cautions did not exist until the past 20 years or so. Dale Earnhardt Jr. reflected on the switch in mentality in this week’s Dale Jr. Download podcast.

“If you’re managing a race or overseeing an event, your mentality ought to be, ‘I do not want to throw a yellow. I really need a good reason for me to have to stop this race, pause this race,'” Earnhardt said. “That was sort of the way NASCAR operated since its existence, all the way up until somewhere around the early 2000s. … We had those fake debris yellows. You’d have a yellow in the middle of a race, and TV wouldn’t be able to show you where this debris was because it didn’t exist.

“… Over the last couple of decades, the mentality of throwing yellows flags has went from, ‘We’d rather not do that. We want this race to continue. We want the green flag and the race itself to play out.’ The mentality has [gone] to, ‘Give us a reason to throw a yellow. We can’t wait.’

“They’re so damn eager to throw it, they got their hand so close to the button, they can actually throw a yellow with a car 50 yds. from the finish line.”

I respect that NASCAR wants to make the race or finish more exciting for the fans. But there comes a point when fabricating excitement breaches the authenticity of a product.

sports are known for some of the greatest stories that you couldn’t write. why you can’t try and orchestrate it, fans will smell artificial and be turned away.

And what’s even worse than that is when the created excitement comes at the cost of safety, which is what happened when NASCAR made its second and much bigger error Sunday night (May 22).

Blaney put the window net down on the cool-down lap, as most drivers do when they think the race is over. But upon learning the race wasn’t over, he was unable to get the window net back up. He strung it up like he had it fastened back up, but by every account I’ve heard, it is impossible for a driver to reach over with one hand and put it back up. It usually takes the biggest, strongest guy on the crew each week.

I guess Blaney somehow tricked NASCAR into thinking he had the window net back up. Either that or it chose to ignore it. Had NASCAR used common sense or also looked closer at the window, it would’ve known it wasn’t secure.

Blaney should’ve been black flagged. I’m not going out on too big of a limb by saying NASCAR didn’t because it felt bad that its entertainment caution would’ve cost him the win. Since it was the All-Star Race, letting him come down pit road and secure the window net under caution and keep the lead would’ve been acceptable as well.

But to let Blaney drive the final two laps with no window net at all? That was extremely careless and continues a trend of NASCAR getting more relaxed with safety recently.

Mike Bliss lost his window net during the 2013 Daytona Duels. They black flagged him and he missed the show. Ryan Blaney lost his window net at the All-Star Race in Texas and won without it. Fair or unfair? #nascar #AllStarRace pic.twitter.com/tQz2JuP1ul

Last year at Kansas Speedway, during a round of green-flag pit stops, an uncontrolled tire from Tyler Reddick rolled past pit road and into the grass. Had a car spun through the grass and hit that tire, things could’ve gotten dangerous fast.

But instead of throwing a caution right away, NASCAR waited 14 laps for Chris Buescher to pit so that the No. 17 team wouldn’t gain an advantage over everyone who already pitted. Making sure Buescher didn’t have an advantage was more important than safety that day.

Last year at New Hampshire Motor Speedway, NASCAR was determined to get the race started on time. Everyone at the track knew it was still raining, but the field got the green flag anyway, resulting in Kyle Busch, Martin Truex Jr. and others crashing. I guess TV ratings were more important than safety that day.

Earlier this year in the Camping World Truck Series race at Las Vegas Motor Speedway, Spencer Boyd crashed into the inside wall with two laps to go. The hit was so brutal, it dislocated Boyd’s shoulder. The caution flag did not wave, and instead the field came back around and passed by Boyd’s truck at full song.

The race had an exciting battle for the win going on between Zane Smith and Chandler Smith. I guess that battle was more important than safety that day.

Denny Hamlin, who finished second in the All-Star Race, noted on Dale Jr Download that there needs to be repercussions for whenever NASCAR messes up in the area of safety. Hamlin will be without his crew chief Chris Gabehart and two pit crew members for the next four races because a tire coming off his No. 11 at Dover Motor Speedway, and he thinks those in NASCAR involved in the window net call should have a similar fate.

"Who are they (NASCAR) suspending up in the tower cause they need to be gone for four weeks as well."@DaleJr | @dennyhamlin
LISTEN
Web: https://t.co/Bifc95ifTg
Apple: https://t.co/yWSE7hCgoi
Google: https://t.co/AOrz0CP3Ta pic.twitter.com/KoKjaPO6DY

I couldn’t agree more with Hamlin. Suspend anyone at NASCAR anytime they choose entertainment, ratings, anything over safety. Actually, no, fire them for that.

It’s been 21 years since a NASCAR national series driver last lost their life behind the wheel of a racecar. Unfortunately, it seems that time has led many to take safety for granted.

The last time safety wasn’t put at the forefront was right before the deaths of Dale Earnhardt, Adam Petty, Kenny Irwin Jr., Tony Roper and Blaise Alexander in 2000-01. Jeff Burton said on the Scene Vault Podcast that prior to those deaths, the rulebook had a driver’s helmet listed as only recommended, not required. How ridiculous is that?

My fear is if NASCAR keeps putting other things ahead of safety then something bad will happen soon, whether it’s a death or a serious injury. I hope I’m wrong about that, I really do. But regardless, NASCAR needs a course correction on that really soon.

No fan of Blaney’s at all, but NASCAR did paint themselves into the usual corner. What a mess. MO. Sheet show, that’s what it was. It’s done, move on.

You are right about the time frame for putting entertainment above safety and competition. It started about the same time as NASCAR getting their first gargantuan television contract with FOX in 2001. I don’t remember the amounts but I do remember it was a quantum leap from the one before it. When you sell your soul to the devil…..

Is the sport more important than any opportunity for entertainment? Safety is merely another ‘tool in the toolbox’ to create the coveted ‘game 7 moment.’ The bastardization of the sport of auto racing will ultimately lead to its demise. A very good article that should Nascar officials should be forced to read.

You don’t need to force NASCAR brass to read the article, they already do read them. They know very well what they are doing (have done) and simply don’t care – as the view from the vacation house or the G5 is such a long way away. The next tragedy on track sadly helps them as well – no such thing as bad publicity as long as it brings eyeballs to the screens.

Let’s not forget last year when they let Chase Elliott ride around with his car’s back bumper flapping around until it came off. Instead of black-flagging him, it resulted in a debris caution which benefitted him greatly. Fortunately, the bumper didn’t hit another car or person.

The new race director who made the blockhead move should be fired. Then, independent officials should arrive on race day for each division. Random assignments. Four or five race directors. Have an independent scheduler assign them and rate and rank them. The race director gets race basics from Miller, but the call they make is final.

They checked a box with this new race director. He hasn’t earned anything. That’s just a fact. It will get worse before it gets better.

Simple solution. Nascar’s sandbox, their rules. they could easily have announced the yellow was put out by accident, there was no caution, thus Blaney won. See? That was easy wasn’t it? easier than allowing backup cars when cars wreck going into a rainy corner.

“But because it was the All-Star Race, the race has to end under caution”

Am I the only one to catch this obvious error? 3rd paragraph needs to be re-written. It should be “…the race cannot end under caution”