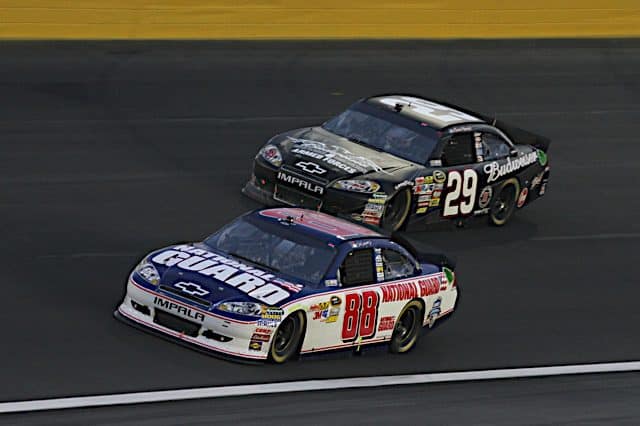 The very first NASCAR Cup Series race at Charlotte Motor Speedway was 600 miles, and I may or may not have triggered some memories with the featured photo.

More than 50 years later, we’re still doing it, and it’s part of the Greatest Day in Motorsports, during which Sunday (May 29) features Formula 1’s Monaco Grand Prix, the NTT IndyCar Series’ Indianapolis 500 and NASCAR’s Coca-Cola 600 unfolding back-to-back-to-back. It’s a trio of superlatives: F1’s most prestigious race, Indy’s biggest event of the season and NASCAR’s longest contest in terms of distance.

Bridging evening to sunset to night, the endurance event is the longest race on the NASCAR schedule, period, and has been run to its full distance or farther (thanks to caution laps) all but five times. That quintet attributes its shortenings to three instances of rain, one early-morning noise ordinance and an energy crisis.

It’s had its share of chaotic and memorable moments: 2011 featured the cars of Mark Martin and David Gilliland getting stuck together after crashing, Landon Cassill‘s No. 09’s splitter being violently ripped off by the infield grass and leader Dale Earnhardt Jr. running out of gas in the final corner, extending his winless drought.

Dominance has been key of late, though: three of the past six Coca-Cola 600s have featured the winner out front for well over 300 of the 400 scheduled laps. Defending winner Kyle Larson led 327 last year en route to his first victory in the race, while Kyle Busch (2018) and Martin Truex Jr. (2016) led 377 and 392 circuits in their wins, respectively.

In the beginning, though … there was chaos.

Kidding. Joe Lee Thompson won the first-ever Cup race contested there, a 600-miler (then called the World 600) featuring 60 cars, just 18 of which were running at the end, and six disqualifications before the race even started. The 600 was Johnson’s second (and last) triumph at NASCAR’s top level.

In its early years, the winner list was a who’s-who of stars. Fred Lorenzen won twice, David Pearson three times and Buddy Baker with an additional trio of victories, while more recent dominance came at the hands of Jimmie Johnson, who came out on top four times in just over 10 years. It’ll be weird to see Johnson competing in an entirely different racing discipline this Memorial Day weekend.

Kasey Kahne also has three 600 wins, while since 2010 Truex and Kevin Harvick are the only drivers to win it multiple times.

With Truex’s two triumphs, Busch’s 2018 win and Carl Edwards scoring a win in 2015, Toyota has won four of the past seven. Rarely, though, does a Ford come out on top in this race of late. Until Brad Keselowski‘s mid-pandemic that was essentially handed to him by a bizarre Chase Elliott pit call, Ford hadn’t won since 2002; to that point, they’d won four straight.

Chevrolet’s more or less ruled the 600, reeling off consecutive victories multiple times throughout its history in NASCAR. That includes four straight in the 2010s, as well as nearly half (10 of 22) the 600s so far this century.

Also of note: last year’s average speed was the highest since 2016 and a 15-mph jump from the previous year. In fairness, though, the 2021 running also had the fewest cautions (four) since 2016.

We’ve got more than 1,250 miles lie ahead of us on Sunday. Let’s get rolling.