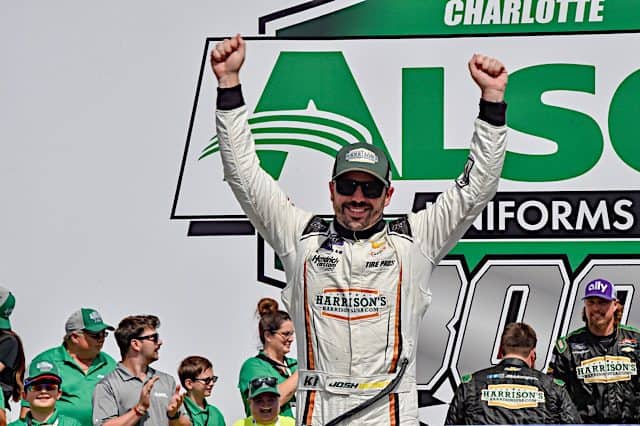 Berry had a brief battle with JR Motorsports teammate Justin Allgaier for the lead until Allgaier cut a tire and had to pit with about 14 laps left. From then on it was smooth sailing for the No. 8 car, winning by 18 seconds over Ty Gibbs.

“Man, it’s so amazing,” Berry said after the race. “This car was so good, Mike (Bumgarner, crew chief) and this whole group have worked so hard, we’ve been getting better every week. I think the sky’s the limit as we continue to learn about each other and keep getting better.

“That was a battle with Justin, it always is with us. We always just seem to run good at the same places and always have to race each other. He slipped up in (turn) 1 and I got loose too, I was following off him and he got loose and I got loose too. It all worked out.”

Stage one featured multiple lead changes between the JR Motorsports drivers and Preece. It also saw several cautions, mostly for slides and spins from Brandon Jones, Brandon Brown and Timmy Hill. Hill ended up going to the garage after starting the race up front.

Near the end of the first stage, Jeffrey Earnhardt, Kyle Weatherman and Snider all were caught up in a crash. The No. 26 of Earnhardt suffered the most damage after he hit the outside wall, ending his day early.

A multi-car caution to end Stage 1 at Charlotte! Here's what happened: https://t.co/jNMKxm3TdX pic.twitter.com/S8lD2Td5is

Berry won stage one, but one of his JRM teammates, Gragson, encountered problems. Gragson reported during the opening stage that it felt like his No. 9 was losing a cylinder. The team worked on it during the stage break.

Another car also had issues during that caution: the No. 10 of Landon Cassill, who eventually went to the garage for a possible fuel pump problem.

Stage two was relatively calm, save for a caution for Jeb Burton sliding around. Jones also skidded but saved it, while Austin Hill slowed a bit near the end of the stage when he felt that a tire was going down.

See also
Up to Speed: Watching the NASCAR Chevrolet Prospects

At the front, JRM earned its 10th straight stage win, this time with Allgaier.

Later in stage three, a big wreck occurred when Austin Dillon cut a tire after some contact with Jones. His No. 48 slowed down and those behind couldn’t get checked up in time to avoid Dillon. Ryan Sieg, Stefan Parsons, Anthony Alfredo and Joe Graf Jr. all collected together in the outside wall.

Big trouble for several cars in Stage 3 of the Xfinity race at Charlotte. Here's the replay: https://t.co/3Ov86ZMUpX pic.twitter.com/2yBqnn3JNa

But in the end, Josh Berry claimed his second victory of the year and JRM’s first at Charlotte.

Next up for the Xfinity Series is the inaugural Pacific Office Automation 147 at Portland International Raceway. Coverage begins on Saturday, June 4, at 4:30 p.m. ET on FOX Sports 1.