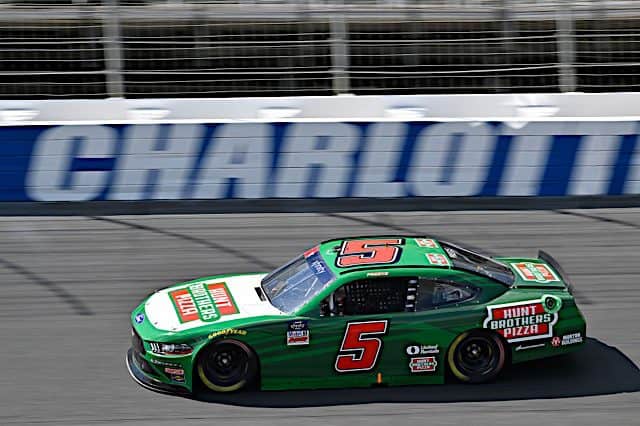 Ryan Preece continues to seek a full-time ride in 2023. In the interim, the Berlin, Conn., native boosted his resume with a fifth-place finish in the NASCAR Xfinity Series’ Alsco Uniforms 300 at Charlotte Motor Speedway Saturday (May 28).

Preece’s finishing position was no fluke as he was running toward the front in his No. 5 Hunt Brothers Pizza Ford throughout the race, finishing seventh in stage one and fifth in stage two.

The performance marked the second NXS race of the year for Preece, a substantial improvement over his 16th-place showing at Richmond Raceway back in April.

Afterward, the veteran remained positive but was not entirely satisfied with his performance.

“We just didn’t have what it took,” Preece told TSJSports’ Peter Stratta post-race. “I think we ended up where I feel like we probably should have, maybe a spot or two more, but ultimately proud of these guys and the top five.”

5th-place finisher @RyanPreece_ talks about changing track conditions all race long, especially with the resin in the higher lanes.

Preece will try and make it 3 strong races from Charlotte tomorrow. #NASCAR pic.twitter.com/k33421nh76

After losing his Cup Series seat with JTG Daugherty Racing following the 2021 season, Preece is spending 2022 as a stand-by driver for Stewart-Haas Racing while making a handful of starts across all three of NASCAR’s top series.

They’ve come with varying degrees of success. In the Camping World Truck Series, Preece has posted a best finish of third in five starts for David Gilliland Racing, a team he won with at Nashville Superspeedway in 2021. In his lone Cup Series start of 2022, Preece settled for 25th piloting the No. 15 United Rentals Ford for Rick Ware Racing at Dover Motor Speedway.

This weekend at Charlotte, Preece is pulling triple duty. He finished a disappointing 11th in the Truck Series race after crashing late in the No. 17 Ford for DGR while battling Carson Hocevar in the No. 42 Chevrolet of Niece Motorsports for the lead.  Preece is also slated to start in the Coca-Cola 600, making his second effort of the season running the No. 15 for Rick Ware Racing.

On Saturday, Preece was not the only one who benefitted from his fifth-place run. For BJ McLeod Motorsports, which fields the Nos. 5, 55, 78 and 99 in NXS, it was only their third top-five finish ever in series competition and their first since Kevin Harvick drove their car to a fourth-place result at Circuit of the Americas last year.

Preece’s success is just the latest example of how a former Cup driver can drop down and help a lower-tier NXS program. Cole Custer won at Auto Club Speedway in the No. 07 Ford for SS Green Light Racing earlier this year while Tyler Reddick went to victory lane last week at Texas in the No. 48 Chevrolet for Big Machine Racing.

Time will tell if Preece’s successful 2022 part-time rides can lead to a successful 2023 opportunity. For now, he’s simply making the best of the opportunities laid out in front of him.

It’s a Ford not a Chevy lol