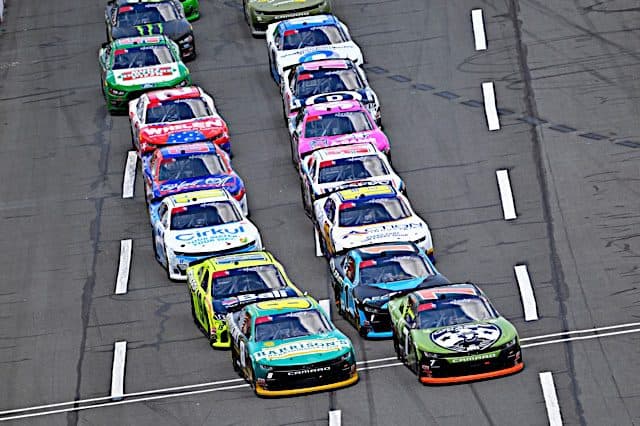 Josh Berry took home his second NASCAR Xfinity Series win of the year at Charlotte Motor Speedway in the Alsco Uniforms 300 on May 28 after beating Ty Gibbs by a whopping 18.039 seconds.

Sam Mayer, Noah Gragson and Ryan Preece rounded out the rest of the top five, with Berry and Justin Allgaier taking home stages one and two, respectively.

You know the drill by now, though. That’s not all that went down in the heartland of stock car racing.

I bet you thought I would say JR Motorsports again, huh? Nope. Our first winner of the week is Preece.

On a day when JRM most definitely did capture the attention of the masses, Preece ran up front with the leaders all day long. As the lone Ford inside the top 10, the most impressive part of that might be that Preece did it with little to no help. Preece is also starting in the NASCAR Cup Series this week after competing in the NASCAR Camping World Truck Series a day before (May 27), making it a busy weekend for the 31-year-old driver.

Then there’s Sheldon Creed. After appearing on our Losers list just one week ago, Creed bounced back in a big way with a top-10 finish, bringing his No. 2 Chevy home in eighth place. Creed needed a good race, as his rookie Xfinity season hasn’t quite gone as planned. However, there’s still plenty of racing left, and he has plenty of talent to grab at least one win this year and a playoff spot with it.

Let’s start with whomever is Nick Sanchez‘s jackman.

After a mid-race pit stop, Sanchez decided to take a little bit of the pits out on the track with him.

Did anyone have "jack still attached" on their bingo card? pic.twitter.com/q84aDbMyUl

I actually think it’s a touching act of remembrance. Sanchez didn’t let it drag him down too much, though (see what I did there?), as he did wind up bringing his No. 99 Chevy home in 18th. It’s always a good thing to finish in the top half of the pack, if only just.

I’ll touch on this more later on, but the final loser of the week has to go to Brandon Jones. Jones might as well have just parked it after the first spin.  It seemed like he ran half of the race sideways.

Now, the bottom line at Charlotte is pretty slick at times, and that appeared to be where Jones had the most trouble. However, it seemed like he spent more of the race looking out of a net instead of a windshield, and it brought him a rather disappointing 23rd-place finish.

This was picked out way ahead of time, and I don’t even care that it didn’t even make the actual race.

Kyle Sieg was supposed to pilot this absolutely stunning No. 28 yesterday but was unable to make qualifying, knocking him out of the race.

This weekend in Charlotte, Kyle Sieg will be racing a special throwback scheme honoring Davey Allison and his 1990 #28 RYR car. With RSS having a partnership with @roushyates and running the #28 Ford, it was a perfect fit. Great job @ryandaleydesign nailing the design. pic.twitter.com/1s5sLn98KA

The 1990 Davey Allison throwback might be my new favorite of the season, and since we didn’t really get to see it today, I’m hoping that it will make a throwback. I’ve said it once, though, and I’ll say it again: It’d be even better if it had gold wheels.

For the second week in a row, the playoff picture has remained the same. Berry notched his second win today, tying him with his JRM teammate Gragson. Elsewhere, Gibbs, Austin Hill, AJ Allmendinger, Allgaier and Jones are all locked in at the moment.

Yes, I know, he already has a win on the season. However, especially the last few weeks, the fall-off has felt real. His average finish of 13.2 is not necessarily bad. In fact, that’s pretty solid.

But with the equipment he has, shouldn’t it be better? His counterpart Gibbs is one of the few Toyotas in the field that have the ability to go out and compete with the JRM crew week in and week out. Should Joe Gibbs Racing look for another driver to do the same, or keep Jones on as a No. 2 option?

The Xfinity Series is off to the Northwest to Portland International Raceway for the Pacific Office Automation 147. Plenty of drivers could make their Xfinity debut, and the road course specialists running the full Xfinity schedule will undoubtedly be looking to stake their claim to a playoff spot. Portland wasn’t on the circuit last year, so it’s anybody’s guess as to who’s g0ing to take home the checkered flag.

The green flag drops at 4:30 p.m. ET and can be found on Fox Sports 1 and the Motor Racing Network.