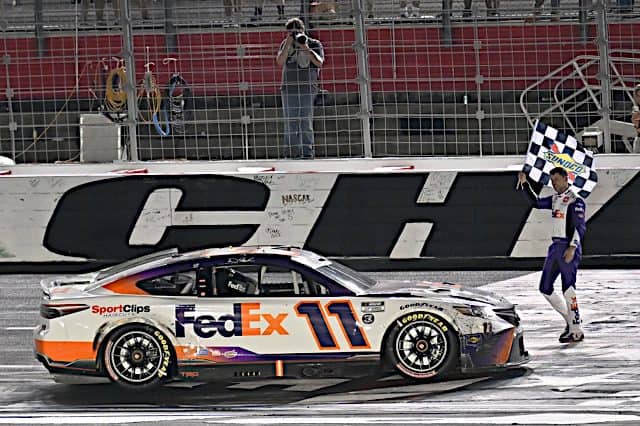 Denny Hamlin brought the greatest day in motorsports to a close Sunday (May 29) by winning a grueling, record-setting NASCAR Cup Series Coca-Cola 600 at Charlotte Motor Speedway. Almost 15 hours, six time zones and more than 1,200 miles of racing kicked off by Formula One’s Grand Prix of Monaco, the driver of the No. 11 persevered through a pair of overtime finishes to emerge on top.

His first Coca-Cola 600 victory is Hamlin’s second win of the year and the 48th of his career. It came in a race of serious attrition that broke the Cup Series race record for distance at 619.5 miles.

Yes, he started on pole, but Hamlin didn’t look a serious threat to win until the first attempt at overtime. With a four-wide move to the bottom on Austin Dillon, Kyle Larson and Ross Chastain, Hamlin seized the top spot as his chief rivals went spinning.

He then held off his teammate Kyle Busch in the second overtime, emerging on top after a record-setting 413 laps by a narrow margin of just 0.119 seconds.

THE COCA-COLA 600 COMES DOWN TO THE FINAL LAP! @dennyhamlin beats @KyleBusch to the line! pic.twitter.com/vFQpUfI9SD

“It’s so special,” Hamlin reflected after the race. “[The Coca-Cola 600] is the last big one that’s not on my resume. . . I’ve been a Coke family driver for 18 years and never won the Coke 600 before, so this means a lot. Man, we just weren’t very good all day, just got ourselves in the right place at the right time.”

Hamlin’s win was Kyle Larson‘s loss, one of a long list of drivers who had the win slip through their fingers in an ultra-competitive 600. Larson dominated to win this race last year, only to stumble through most of the weekend. Crashing in practice, he started 36th and before halfway, had already written off 2022’s edition as “the worst race of [his] life.”

"We've 𝙇𝙄𝙏𝙀𝙍𝘼𝙇𝙇𝙔 caught on fire." @DanielsCliff out here pumping his driver and crew up! 🔊 pic.twitter.com/DcBHV1AGh5

Crew chief Cliff Daniels put his motivational speaking skills to the test, saying, “we went from the back to the front more times than I can count, we hit the wall, we spun out, we’ve literally caught on fire. We were also the most penalized people on pit road in this half. . . so I don’t really know what the hell you’re worried about. I’m fine.”

The reigning NASCAR Cup champion got the message. In a race of attrition that saw more than half of the field fail to finish, Larson somehow fought his way to the lead, passing Ross Chastain with just 48 laps to go in regulation.

But Chase Briscoe in second spent 46 laps reeling Larson back in. With two laps remaining in the original 600-mile distance, Briscoe threw it deep into turn 2. For the second time since Easter, the No. 14 went spinning to the inside of the leader, setting up the first attempt at NASCAR Overtime.

Unfortunately, for fans of the comeback, with the white flag in sight, Larson was collected in the second Big One of the night when Austin Dillon got a little overzealous on fresh tires. Charging from sixth place on the restart, Dillon got alongside Larson for the lead by turn 4 but was unable to hold his line on the inside, clipping Larson’s bumper and spinning out.

“I sent it in there as hard as I could,” Dillon said. “I didn’t want to wreck nobody. I wish I could have finished the corner. I had four tires and thought that was going to be enough. Somehow, the No. 5 was still out there.”

As the field scattered, Hamlin scooted ahead on the inside and took the lead while all his major competitors wiped out.

It was the cherry on top of a long, long night in Concord for everybody, which saw 18 cautions over the 619.5 miles, the most of any race this season. There were more yellow flags in the calamitous first stage alone than the entire 2021 running of this race, including one for early leader Kyle Busch. Busch held a solid advantage for much of the early going, but after losing the lead to Daniel Suarez, Busch’s No. 18 broke loose in turn 2.

The full field avoided the spinning M&M’s Toyota, and thanks to quick repairs by the No. 18 team and a couple of free passes, the 2018 winner got back on the lead lap before the end of the stage.

Chase Elliott’s crew was able to take advantage of the caution to get their driver off pit road with the lead, an advantage he would hold until the end of the first stage for his third stage win of the season.

Trackhouse Racing Team showed up in the second stage, with both its drivers leading laps and Suarez besting teammate Chastain for his second stage win of the season and his first on an oval.

A 12-car wreck stole the stage two headlines, with a heavy crash on lap 191 eliminating pre-race favorites Ryan Blaney, William Byron and Kurt Busch, among others.

“Just kind of hit the apron and got me loose,” Blaney said. “I hate that other cars got tore up.”

The Big One couldn’t have come at a worse time for Elliott, who had broken a toe link and spun after contacting the wall just three laps earlier.

The No. 9 Chevrolet was sent to the garage after exceeding the six-minute Damaged Vehicle Policy.

Stage three was still all about Trackhouse. Both Chastain and Suarez led laps, but after first a tire call and then a bad pit stop forced the No.99 back in the pack, the Melon Man cruised to his third stage win of the season.

On a restart with 56 laps to go, Suarez, once again recovering from mid-pack, made an aggressive block on Briscoe exiting turn 4. The two made contact and the stage two winner got sent spinning in front of the field.

Chris Buescher, trying to avoid the incident, got hit from behind and bounced off Suarez into the frontstretch turf. The damaged right-front suspension rolled underneath the No. 17 and sent Buescher tumbling violently, coming to rest on his roof. Thankfully, the RFK Racing driver was unharmed.

Kyle Busch recovered from his spin to finish second, while Kevin Harvick, Briscoe and Christopher Bell each recovered from their respective bevy of issues to finish inside the top five. Tyler Reddick, Ricky Stenhouse Jr., Michael McDowell, Larson and Alex Bowman rounded out the top 10. According to FOX, Ty Dillon in 13th was the only lead-lap finisher to not suffer either an accident or a penalty.

Next week, Sunday, June 4, the Cup Series makes its debut at WorldWide Technology Raceway at Gateway outside of St. Louis. The Enjoy Illinois 300 will is scheduled for 3:30 p.m. ET with television coverage provided by FS1.

What a clusterF! Bonehead move by Dillon. It’s not the first time either.

That’s what happens when you sit on your brains for too long and your butt goes to sleep.

Austin Dillon has always been a moron. Now he is getting a reality TV show.