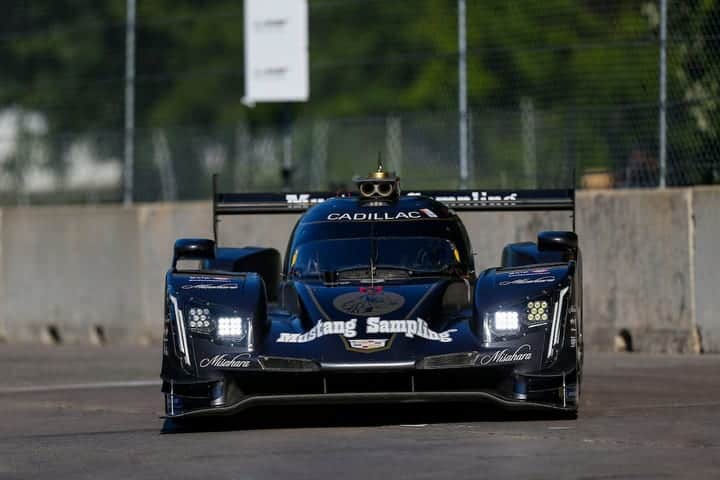 The IMSA WeatherTech SportsCar Championship will return to Belle Isle Park for the final time in this weekend’s Chevrolet Sports Car Classic.  16 teams will take on the bumpy street circuit.

In the DPi class, the six full-time teams will do battle for 100 minutes.  Traditionally, street courses heavily favor the Cadillacs.  GM-based vehicles have won all but one of the races at Belle Isle since the Grand-Am/ALMS merger.  The sole exception to the rule was when Juan Pablo Montoya and Dane Cameron won in 2019.

Last year’s race was won by Chip Ganassi Racing’s Kevin Magnussen and Renger van der Zande.  With Magnussen back in Formula 1, van der Zande could defend his victory with Sebastien Bourdais.  Pipo Derani and could also threaten.  This weekend, he’ll have a new teammate that is a known quantity to him in Olivier Pla.

The two Acura teams will still be competitive despite the ORECA 07-based Acura ARX-05 not being the biggest fan of bumpy surfaces.  Don’t count them out.

In the GTD class, only 10 teams are entered, down from 13 that were originally entered and 11 that raced at Mid-Ohio.  The team that has opted out of Belle Isle is Inception Racing, but for a different reason.  The Belle Isle weekend is a clash with the Fanatec GT World Challenge Europe Powered by AWS Endurance Cup Paul Ricard 1000k.  As a result, the team is back in Europe to focus on the endurance event.

With the GTD Pro class not competing at Belle Isle, VasserSullivan is once again fielding two Lexus RCF GT3s in the GTD.  The regular No. 12 lineup of Frankie Montecalvo and Aaron Telitz is unchanged.  However, the No. 17 team has had a late change.  Jack Hawksworth was recently injured in a motocross accident.  As a result, he will have to sit out the race this weekend.  Ben Barnicoat, Hawksworth’s regular teammate in the GTD Pro class, will take his place.

. @jackhawkrace sustained an injury in a motocross incident that will prohibit him from competing in Saturday’s #IMSA race at @detroitgp. Fellow Lexus factory racer @BenBarnicoat will replace Hawksworth in the No. 17 Lexus RC F GT3, which will compete in the GTD class. pic.twitter.com/UKPZ5sn4Wz

Barnicoat has never previously raced at Belle Isle Park.  Given his resume that consists primarily of GT racing since leaving karts, he has very limited experience racing on street courses in full-bodied race cars.  That said, he did finish second at Long Beach back in April.  Barnicoat spent Memorial Day weekend in Charlotte, checking out the Coca-Cola 600.

Brought @BenBarnicoat to see some of the drivers before the race so he can get some insight on what these cars are like to drive. pic.twitter.com/oF4DHHkYRY

Hawksworth drove at Mid-Ohio with Richard Heistand as a teammate.  The original entry list had TBD as Barnicoat’s teammate.  VasserSullivan announced Tuesday that Kyle Kirkwood will drive the No. 17 alongside Barnicoat.

Kirkwood has seven previous starts with VasserSullivan in his role as an endurance driver for the team, including this year’s Rolex 24 at Daytona.  In those seven starts, Kirkwood’s best finish was fourth in the GTD Pro class back in January alongside Barnicoat and Hawksworth.

The other nine teams on the entry list are unchanged from Mid-Ohio.  It is a rather thin entry list, but the race should be competitive.  Note that the race will count only for points in the WeatherTech Sprint Cup and not the full season GTD points.

The Chevrolet Sports Car Classic is scheduled to go green at 3:10 p.m. ET Saturday.  The race will air live on USA starting at 3 p.m.