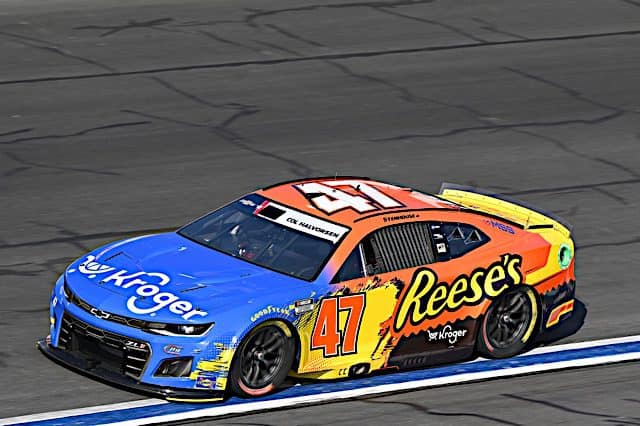 Ricky Stenhouse Jr. had about the roughest start to a season a driver could have, failing to finish four of the first 10 races of the 2022 NASCAR Cup Series season while slumping to 31st in the standings.

Since then? The driver of the No. 47 JTG Daugherty Chevrolet has turned into a top-10 machine.

Stenhouse finished seventh in the Coca-Cola 600 on Sunday night (May 29) at Charlotte Motor Speedway to extend his top-10 streak to four races. The streak is the longest of not only Stenhouse’s career but for his organization since they entered the Cup Series in 2009.

The longest race on the NASCAR Cup Series schedule was all about attrition, with only 20 of the 37 entrants running at the finish. Still, Stenhouse not only managed to keep his No. 47 Chevrolet out of trouble, he showed consistent speed throughout the night. Stenhouse scored points in two of the race’s first three stages, finishing seventh in stage one and fifth in stage two.

The 34-year-old then survived a melee of wrecks at the end of the race and found himself restarting from the second row on the final restart. Stenhouse dropped a few spots in the final two laps but still brought home that seventh-place result despite only taking right-side tires for NASCAR Overtime.

Stenhouse now has four career top 10s at Charlotte, with all four coming in the past six races at the track.

More importantly, Stenhouse now has four straight top 10s after starting the season with only one top 10 through the first 10 races. Stenhouse finished outside the top 25 eight times through the opening 10 races, squandering 42 laps led and opportunities to win at pack races at Daytona International Speedway and Atlanta Motor Speedway.

But a second-place outing at Dover Motor Speedway turned the season around for the JTG squad. Through this four-race top-10 streak, Stenhouse has moved up to 24th in the standings although he remains some 83 points outside the final playoff spot.

As for JTG, the team hasn’t had one driver score more top 10s in a season since AJ Allmendinger had nine in 2016.

Stenhouse and JTG will try to extend the career-long top-10 streak next week in the Cup Series’ first trip to World Wide Technology Raceway at Gateway.

He’s finding out it’s better not to win the race than to try to force the issue to win and end up wrecked.

That’s got to be a record for Ricky, 600 miles without crashing out!