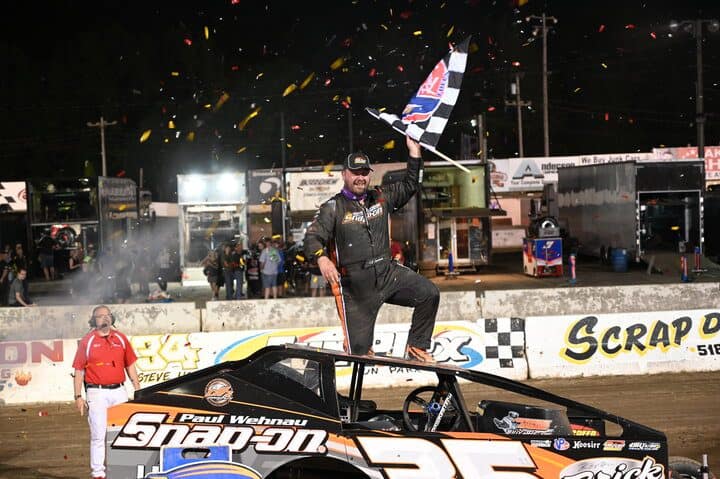 A dominant Andy Bachetti’s transmission failure handed LJ Lombardo the King of Spring 100 at Lebanon Valley, one of the biggest wins of his career.

Lebanon Valley Speedway devoured a number of contenders in the top five over the course of the King of Spring 100 feature, but it couldn’t devour LJ Lombardo, who led the final 31 laps of Monday’s feature to score $13,500 and a guaranteed spot in the Super DIRT Week feature at Oswego later this fall.

Polesitter Peter Britten led the opening 17 laps despite heavy pressure from Lombardo from lap 10 on, eventually conceding the lead on lap 18. Britten would then bow out on lap 24, with second-place Brett Haas cutting a tire two laps later to bring out the yellow.

The lap 26 restart saw Andy Bachetti blow past Lombardo to the race lead, a lead that he would hold for the next 44 laps until the caution flew on lap 70 for Brian Berger slowing on the frontstretch. Under that yellow flag, Bachetti suddenly came to a stop on the frontstretch, diagnosed with a terminal transmission failure that handed the lead back to Lombardo for good.

Monday’s race caused complete chaos in the series points race, with Mat Williamson proving the big winner after a fourth-place run; points leader Stewart Friesen ended up a distant 19th after cutting a tire early in the feature and failing to finish the race. Defending series champion Matt Sheppard cut a tire with less than 10 laps to go while running fifth.

What more can be said about LJ Lombardo? He was a top-five fixture all race long, and as much as he benefitted from Bachetti’s mechanical troubles, Lombardo was definitely the fastest car at Lebanon Valley when the checkered flag flew. This was a convincing performance.

The points aren’t updated at the time of this writing, but for Mat Williamson to come through with a top-five finish on a night that both Friesen and Sheppard have tire troubles and Max McLaughlin proved a non-factor all night long was a major win for the No. 88 as it relates to the Super DIRTcar standings.

This is also unofficial at the time of this writing, but Staatsburg, N.Y.’s Kolby Schroder appeared to be Monday’s King of Spring 100 hard charger, improving from 24th to 11th in the feature.

Pittsfield, Mass.’s Wayne Jelley blew an engine with four laps to go in the second Last Chance Showdown race while running in a transfer spot, ultimately missing the King of Spring 100 feature.

If DirtVision reported this, I missed it, but former Lebanon Valley regular Ronnie Johnson was disqualified from his heat race and didn’t start his scheduled Last Chance Showdown. According to at least one Twitter user, something was amiss about this DQ.

Lebanon Valley dq'd RJ for absolutely nothing. Just because the owner still is nut sore because RJ left to run Fonda

Editor’s Note: We contacted Super DIRTcar Series director Dean Reynolds to get an explanation for the DQ.  In his explanation, Reynolds stated, “Ronnie [Johnson] didn’t go to scales after his heat race. He went to his pit stall. Did he go to scales after? Yes, but when you pull into your pit stall that unfortunately is when the infraction occurs.” Reynolds continued on to stay that the DQ had to be implemented since Johnson’s crewmembers were around the No. 2RJ in his pit after he stopped there before he went to the scales.  It also appears that Johnson passing up an interview on the frontstretch post-heat race for DirtVision did not play a role in the DQ.

In addition, the DQ was completely the call of the Super DIRTcar Series officials, not Lebanon Valley’s.  Speedway owner/promoter Howard Commander had no part in the decision that was made.

Polesitter Peter Britten is nicknamed Batman, which is fitting for a driver that quickly learned what hero to zero means. Leading the first 17 laps of the King of Spring 100 only to park for good seven laps later and more than 75 laps short of the finish is about as high and low as a day can get.

Of course, Britten’s heartache was topped by that of Andy Bachetti, who saw his transmission give out under caution in a race he was handily in control of before the caution flag flew on lap 70. The only silver lining for Bachetti is the transmission failed 30 laps short rather than later in the feature.

Truck Series regular Stewart Friesen slapped the wall in turn 4 halfway through his heat race, dropping him from second to fourth in the finishing order and out of the redraw. Buried come feature time, Friesen brought out the yellow flag on lap 36 with a flat tire, eventually parking for good on lap 81 with a 19th-place finish. The weekend wasn’t fruitless for Friesen though, as he won Sunday’s Super DIRTcar feature at Weedsport.

The PA crew at Lebanon Valley wasted no time during hot laps reminding the crowd that the concessions stands only accepted $1 bills. I wonder if they pay the drivers the same way.

“Fresh back from the Indy 500 today … well, he was at the race, is Tim Hartman” was a damned funny quip during sportsman heat race lineups. Though considering Alex Bowman, Kyle Larson and Christopher Bell made their way from Charlotte to Lawrenceburg, Ind. to run sprint cars the day after the 600, it was also an important distinction to make.

The last-place driver in the redraw for Super DIRTcar Series features wins a free Hoosier tire for their hardship. Mat Williamson, who drew the 12th spot on Monday, expressed doubts that he could actually get said tire given the ongoing shortage across the dirt racing industry. I’m half surprised the driver didn’t demand to receive his tire upon drawing the pill.

Dirt racing had a rough weekend in multiple cases this weekend. First of all, a quick get-well to World of Outlaws late model regular Josh Richards, who was sent to the hospital with broken teeth after a mud clod clocked him in the head while competing at Eldora Speedway over the weekend.

Also, thoughts and prayers to the crew at Huset’s Speedway, whose facility was all but leveled by severe weather in the Dakotas this weekend. Here’s hoping they get back up and running shortly, as the facility has done a great job pumping up sprint car purses since returning to competition.

Our own Christopher DeHarde was on site in Lawrenceburg with the World of Outlaws Monday night and interviewed David Gravel, driver of the No. 2 Huset’s Speedway-sponsored sprint car, regarding the situation at Huset’s. Look for that content Tuesday on Frontstretch.

4 – cautions that flew during Monday’s King of Spring 100 feature.

Where it Rated (on a scale of one to six cans with one a stinker and a six-pack an instant classic): We’ll give the King of Spring 100 four Bloody Marys. A scorchingly hot Memorial Day weekend had me down for the count by Monday afternoon, but an unexpected winner and mid-race drama at Lebanon Valley made up for an otherwise academic DIRTcar race.

Up Next: Thinkin’ Dirty returns to the Lucas Oil Late Model Dirt Series next weekend, as the tour heads to West Virginia Motor Speedway for the $50,000-to-win National 100. The weekend will mark the return of major late model touring action to the track that was just refurbished a year ago. Coverage can be found on MAVTV Plus.