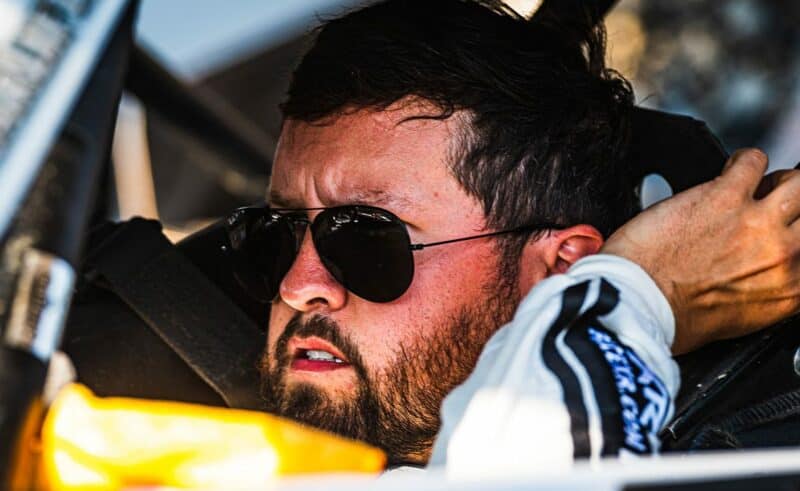 On the stats sheet, Jonathan Davenport dominated Saturday’s Show-Me 100. But the final third of the race saw a three-way battle between Davenport, Ricky Thornton Jr. and Chris Ferguson swapping the lead multiple times as they dealt with lapped traffic. That all climaxed on lap 88, when Davenport spun out trying to put Earl Pearson Jr. a lap down, handing the lead to Ferguson.

On the ensuing restart, Ferguson drove away from Thornton to score the $50,000 win, by far his biggest of 2022 and his first win at the Wheatland track since 2020.

The feature race also saw a major shuffle in the series points standings. The top-two in the standings, Brandon Sheppard and Tyler Erb, both finished Saturday’s (May 28) feature outside the top 10, allowing defending champion Tim McCreadie to close ground courtesy of a third-place run and to jump Erb in the standings.

He faded during Saturday’s 100-lap main event, but Johnny Scott scored his first career LOLMDS win in convincing fashion during Friday’s (May 27) preliminary event. Figuring out a diamond pattern to exit turns 2 and 4 on a racetrack that was full of character, Scott proved fast enough to past the mighty Davenport multiple times under green, then driving away once he figured out a race line that kept him out of the ruts. The track was ugly on Friday, but Scott drove a stellar race on it.

What more can you say about veteran Tim McCreadie? On a night where the two series regulars in front of him had less than stellar nights, McCreadie won Show-Me 100 hard charger honors, going from 17th to third and moving up to second in the points. Even with Sheppard on the tour, I still would put my money on the No. 39 team to repeat their title from a year ago.

Ashton Winger turned his career around last summer courtesy of the DIRTcar Summer Nationals. Though this wasn’t one of those races, a strong top-10 effort from Winger after a disappointing Illinois Speedweek was just what his No. 89 team was looking for as dirt racing moves into the summer season.

Mike Marlar’s made a habit of winning big-money races in 2022, but the Show-Me 100 showed Marlar something instead. The most notable victim of a rain-soaked surface that proved full of ruts during Friday’s 40-la feature, Marlar suffered a freak accident during the preliminary that sent the No. 157 team home early. We’ll let the driver speak for himself and hope that he’ll be back to racing in short order.

No racing today. X-rays instead. Car bicycled in a rut, landed seat first, knocked floor plan through pedals. Hopefully no fractures and will be back after it soon. Maybe @lucasspeedway uses better judgement today, don’t want to see any of my buddies get hurt. pic.twitter.com/VCqnpSFjPm

Brandon Sheppard was pretty much the LOLMDS equivalent of Jimmie Johnson in his series’ crown jewel event this weekend. Both drivers stole all the headlines coming into the weekend (Sheppard was the first driver featured on MAVTV’s intro reel for the Show-Me 100 feature Saturday night), yet both proved to be complete non-factors in their respective races. Sheppard didn’t cost himself a racecar, but a 12th-place finish in a race that the Rocket house team had circled on their calendar is an absolute disappointment.

Defending Hell Tour champion Bobby Pierce proved strong again in the Midwest, moving up from 14th to fourth in the first half of Saturday’s feature before pulling off on lap 47 with an unknown issue.

I tried to give MAVTV the benefit of the doubt here, as Friday night’s dirt racing Twitter scene saw the usual complaints about viewers being unable to stream the LOLMDS race on their accounts. The difference on Friday? MAVTV actually was responding on Twitter, directing concerned viewers to their technical support. That hasn’t always been the case with MAVTV and was welcome to see.

Of course, by Saturday, with the service streaming both the Show-Me 100 and the Little 500 asphalt sprint car race, technical difficulties impacted the service to the point that MAVTV made the feature broadcasts available to anyone and everyone willing to click a link on their homepage (the same thing happened with their coverage of January’s Chili Bowl Nationals).

Yes, making sure streamers have a means to watch these features is good customer service. But speaking as a paying customer, I don’t like shelling out $100 a year when others can reliably wait on the service to break and then catching major events.

Sometimes Tweets speak for themselves. In the case of MAVTV’s booth this weekend, that shoehorned Bob Dillner in with the timeless James Essex, Twitter said it better than I could ever hope.

When Bob Dillner talks over @EssexLucasOil on @MAVTV it’s like pouring crappy Dollar Store ketchup all over a Ruth’s Chris steak. @lucasdirt

Any criticism of the racing surface at Lucas Oil Speedway after a rough Friday was gone Saturday night, with the surface proving pristine for the Show-Me 100. Instead, the controversy came from Jonathan Davenport being sent to the rear after his lap 88 spin.

@TheFast49 never stopped… he should be starting 6th…..

There seemed to be confusion between the LOLMDS and the World of Outlaws late model tour, which features a blend rule; i.e. when a car spins but never stops on track, the driver that spins and brings out the yellow is allowed to restart where they get back going forward in the running order as opposed to being sent to the back. I personally hate that rule, as a) said driver brought out a full-field caution and b) the blend rule does nothing to account for loss of momentum and the potential obstruction that the driver that spun can pose to the rest of the field.

The Lucas Oil rulebook does not account for the blend rule anywhere in its text that I could find, so that debate is moot. Now, having said that, the rulebook citation isn’t particularly helpful. To quote, “In the event of a caution, the car, or cars, involved in the incident that comes to a stop on the racetrack will be sent to the rear. All cars that are indirectly involved in the accident (spinning or stopping to avoid the wreck) will be given their position back.”

The problem? Davenport was directly involved and charged with the caution. But, Davenport also didn’t come to a stop on track. There’s no debate from where I’m sitting that sending Davenport to the tail of the field for spinning out on track is the right call from a race control perspective, but I’d hope that series officials take the opportunity to clean the actual rulebook up. Besides, there’s something wrong with a national touring series rulebook still making reference to Florida Speedweeks in late May.

Where it Rated (on a scale of one to six cans with one a stinker and a six-pack an instant classic): We’ll give the Show-Me 100 five Missouri Mule IPAs. 100-lap late model races aren’t normally a recipe for the best dirt racing has to offer, but a stellar track surface and long green-flag runs that made lapped traffic a factor allowed Davenport, Thornton and Ferguson to put on a show up front worth watching.

Up Next: Thinkin’ Dirty sticks with the Lucas Oil ranks next weekend, as the tour heads to West Virginia Motor Speedway for the $50,000-to-win National 100. The weekend will mark the return of major late model touring action to the track that was just refurbished a year ago. Coverage can be found on MAVTV Plus.