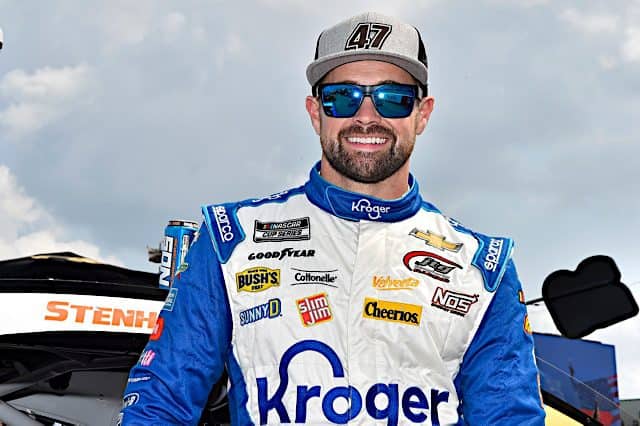 What can I say to describe the 2022 Coca-Cola 600? Chaotic, amazing, bizarre, jaw-dropping, wholly compelling and about any word associated with crazy would come the closest.

The longest race in the NASCAR Cup Series not only conformed to its moniker, but it took on a whole new meaning as one of the greatest Charlotte Motor Speedway races in recent history. It was also officially the longest, featuring 413 laps and 619.5 miles of competition.

A race that took five hours, 13 minutes to complete was still compelling from start to finish. Nearly the entire field was involved in either an accident or some type of pit road penalty. In fact, only one driver on the lead lap steered clear of both, and it just happened to be an underdog (more on that later).

But there was also another surprise amidst the chaos. A driver many know as today’s Jimmy Spencer, “Mr. Excitement,” survived to earn a seventh-place run. That would be Ricky Stenhouse Jr.

Stenhouse has quietly been one of the most consistent drivers over the past month. However, the Coca-Cola 600 was a whole different ballgame. Stenhouse started from the rear of the field after the team made unapproved adjustments. As NASCAR and Charlotte recognized the military and fallen service members in memorable fashion, Stenhouse’s No. 47 carried the name of Colonel Gail Halvorsen.

The Olive Branch, Miss. native quickly found his way to the front, as he ended stage one in the seventh position.

That was a good stage for Ricky Stenhouse Jr. Ended in points despite him starting at the tail.

Would he have believed that before the race?

"No, not at all. Hope she continues to keep up with this track."

Stage two got a little trickier for Stenhouse, though. He was busted for speeding midway through, then had to avoid a massive pileup in turns 1 and 2 on a restart later on. However, the speed in his JTG Daugherty car was evident as Stenhouse completed the stage in fifth.

He then faced some adversity from another driver in the third stage. While battling Kevin Harvick for position, Stenhouse slid up some, causing Harvick to make contact with the outside wall. During the next caution, the Stewart-Haas Racing driver showed his displeasure with Stenhouse.

The 34-year-old wasn’t shy to fire back, saying on the radio, “He’s just mad because he doesn’t know what he’s doing anymore.” Ironically, Stenhouse is a client of Harvick’s management company, responsible for helping negotiate his NASCAR contract.

As Stenhouse’s focus returned to the track, his No. 47 Kroger/Reese’s Chevrolet stayed inside the top five or top 10 for most of the third stage. As the race wore on, though, he struggled with the front of the race car toed in slightly after contact. Stenhouse ended the stage outside the top 10 and the car’s handling continued to slowly slip away.

Stenhouse never visited the top 10 in the final stage until four laps to go when a caution for Chase Briscoe sent everyone to pit road. The JTG Daugherty Racing team opted to take two tires along with three other drivers to move Stenhouse to fourth for the restart. That left him vulnerable to a large group of drivers with four tires; however, another yellow flew when the leaders tangled.

Stenhouse once again started on the second row for the final restart, holding serve briefly before slipping to seventh. Still, the end result was a top-10 finish, impressive on a night such high attrition happened around him. The result now gives Stenhouse four consecutive top 10s in points races for the first time in his 10-year Cup career.

Michael McDowell had a top-20 car for most of the race. But as the competition dropped like flies, McDowell’s window opened wider for a strong result. He had his own issues to recover from after being involved in a multi-car crash on lap 192 that damaged the left side of his splitter. The No. 34 team opted to take four tires during the yellow with four laps remaining, a strategy that proved brilliant in the end.

After the last crash with two to go, McDowell kept his No. 34 Fr8Auctions.com Ford in the top 10 to earn an eighth-place result. McDowell now has four top 10s in the last six races and has tied his career-high of five top 10s in a season. Interestingly, McDowell has more top 10s than four 2022 winners in this topsy-turvy year of competition.

Remember that one driver who avoided all the plagues tonight? That driver is Ty Dillon. He didn’t have the speed of his Petty GMS Motorsports teammate Erik Jones, but simply keeping the car clean proved to be of great value for the No. 42 Black Rifle Coffee Company Chevrolet team. He did report early in the race there were issues with his power steering, but those issues never derailed his night. Dillon rounded out the night with a quiet 13th-place result, giving him three straight top-20 finishes and nine on the season.

Right behind Dillon in 14th was Jones. The No. 43 showed speed that left him capable of running up front at times; however, he was ultimately bit by the same luck many drivers experienced. Jones entered the top 10 in stage two, rounding it out in third to gain eight stage points. From there, the No. 43 FOCUSfactor Chevrolet bounced around about 10th to 15th.

Unfortunately, Jones’ challenge grew in the final stage when he got squeezed into the fence, making significant contact with the wall. However, the Petty GMS driver rebounded back into the top 10 with just over 40 laps to go, only to brush the wall again in the closing stages. Despite repairs and four fresh tires for the final restarts, Jones could not return to the top 10 and brought the car home 14th.

Todd Gilliland’s 16th-place result is more impressive than it looks. While running inside the top 20 with just over 50 laps remaining, Daniel Suarez made contact with Briscoe, sending him for a spin in front of the field on the frontstretch. While most of the attention went to Chris Buescher wildly flipping in the infield turf, Gilliland ran into Suarez prior to that, damaging the nose of his car. The damage was fairly significant but not enough to deter the rookie in his first Coca-Cola 600.

Two underfunded drivers who pulled together respectable finishes were Cody Ware and BJ McLeod. Ware finished 18th, giving him his third top 20 of the season. By comparison, Ware had never recorded a top-20 finish at the Cup level prior to 2022. McLeod followed him up in 19th, matching his best season-best result that came at Atlanta Motor Speedway in March. It was a solid recovery for McLeod, who got inflicted with minimal damage during a stage two incident.

Michael McDowell (eighth): “We had a really fast FR8 Auction Ford Mustang. Unfortunately, we got too much damage in that wreck, that big pileup when the (No.) 6 spun with somebody. That kind of took a little speed out of our race car, but we did a good job working really hard trying to get the balance back. Then, a lot of attrition there at the end. It was a wild race and we got ourselves in position there.

“I’m proud of everybody. It’s another top 10. We keep clicking them off. We had good speed.  We qualified in the top 10 and finished in the top 10 today, so it’s good.  It’s good to be disappointed with that. I thought we had a top five coming to the checkered there and got all stacked up there four-wide and got in the fence a little bit, but we’ll take a top 10 and move on to Gateway.”

Noah Gragson (24th): “We had a really good day overall and had some fun driving in the top 10 with our No. 16 Charlotte Knights Camaro ZL1. I got into the wall and had to pit for tires, which put us down a couple laps. We thought we could get back on the lead lap, but we had a parts failure that ultimately ended our day. It’s unfortunate that we couldn’t quite make it to the end, but we had a fast car and I think we made some gains.”

Justin Haley (27th): “We had a really good day overall and had some fun driving in the top 10 with our No. 16 Charlotte Knights Camaro ZL1. I got into the wall and had to pit for tires, which put us down a couple laps. We thought we could get back on the lead lap, but we had a parts failure that ultimately ended our day. It’s unfortunate that we couldn’t quite make it to the end, but we had a fast car and I think we made some gains.”

Picking the best underdog scheme of the week is always a fun task, but it was extra special this week. The Coca-Cola 600 has always brought out some of the best paint schemes during the season. Many are adorned in red, white and blue for Memorial Day, while others have alternate schemes for their sponsor. There were several patriotic schemes that were brilliant, and don’t worry, they won’t be left out.

However, the scheme that stood out to me was one that mixes America’s pastime and a sport that also does a good job honoring our military, though no one tops NASCAR in my opinion. Noah Gragson’s No. 16 Kaulig Racing Chevrolet was sponsored by the Charlotte Knights for the hometown race, and boy did it deliver. Baseball schemes have typically been great in the past, and this one looked ready for the diamond. Unfortunately, Gragson’s strong run took a turn when the “baseball car” ended up where many balls do: in the turf. Gragson’s spin in stage three eventually relegated him to a 24th-place finish.

Drivers continued the tradition of honoring fallen service members on the windshield banner of their cars for the 600. NASCAR’s storied legacy of honoring our military is both sentimental and one of the richest traditions in American sports. Thank you to those who are serving and we will never forget those who gave their lives for this country.

We will be starting engines coming up at 6:10 PM ET and carrying the name of COL Gail Halvorsen on our windshield tonight. #NASCARSalutes pic.twitter.com/LKoE05Ryda

Thankful to have the families of both Captain Kimmel and Staff Sergeant Robinson in attendance for this Memorial Day race pic.twitter.com/vYtu7ZYwfA

We are honored to carry Lance Corporal Rylee McCollum and Lance Corporal James Ray Davenport on our cars for 600 miles. We are incredibly thankful for your service! #NASCARsalutes pic.twitter.com/Yg6S0fv2YU

Honored to carry the name of Lt Col Kenneth Stonebraker on the No. 43 this Sunday @CLTMotorSpdwy.

Yesterday, his daughter Cindy visited our shop to share her dad's incredible story.

A hero who gave the ultimate sacrifice, he is never forgotten 🙏 @Erik_Jones | @usairforce pic.twitter.com/0V0Gz2iPCk